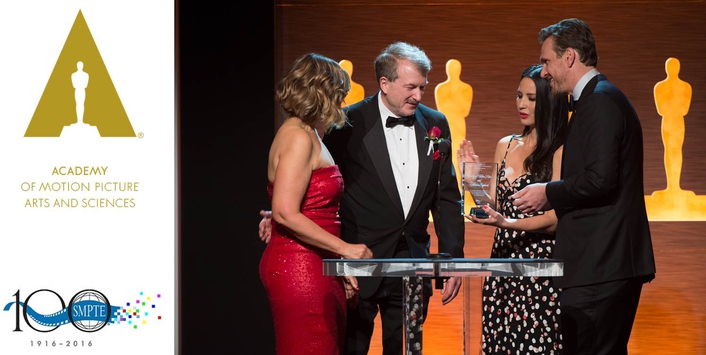 The Society of Motion Picture and Television Engineers® (SMPTE®), a leader in motion-imaging standards and education for the communications, media, entertainment, and technology industries, today announced that it received a Special Award from the Academy of Motion Picture Arts and Sciences (AMPAS).

AMPAS presented the Special Award plaque to SMPTE at the Academy's annual Scientific and Technical Awards presentation, which took place Feb. 13 in Beverly Hills, California. The award citation reads, "For one hundred years, the Society's members have nurtured technology, provided essential standards, and offered the expertise, support, tools and infrastructure for the creation and post-production of motion pictures." Robert Seidel, SMPTE President and Barbara Lange, the Society's executive director, accepted the award.

Lange's acceptance speech:
On behalf of the Society of Motion Picture and Television Engineers, I thank the Academy for this prestigious recognition.

One hundred years ago, this organization was founded to support the motion picture industry, helping bring order to the technical chaos of the day. As our founder, C. Francis Jenkins, said in 1916, 'Engineers secure the best standards for equipment, quality, performance, and nomenclature, an entirely practical and attainable ideal.

From determining the size and position of perforations in film to today's work in areas such as high dynamic range in digital cinema, SMPTE's work enables the motion picture industry to thrive the world over.

I am proud and honored to be accepting this award on behalf of SMPTE's 7,000 talented members and volunteers. It is the collective invention, enthusiasm, and dedication of all these individuals, past, present, and future, that help make technical innovation possible. Here's to the next century!

This is SMPTE's third award from the Academy, fittingly bestowed in the Society's centennial year. The first was an Oscar® statuette presented by Bette Davis to the Society's president, Barton Kreuzer, in 1957 in recognition of SMPTE's first 40 years of "contributions to the advancement of the motion picture industry." In 1989, SMPTE received an Award of Commendation (a plaque) for the contributions of the members of SMPTE engineering committees. The citation reads, "by establishing standards, they have greatly contributed to making film a primary form of international communication." 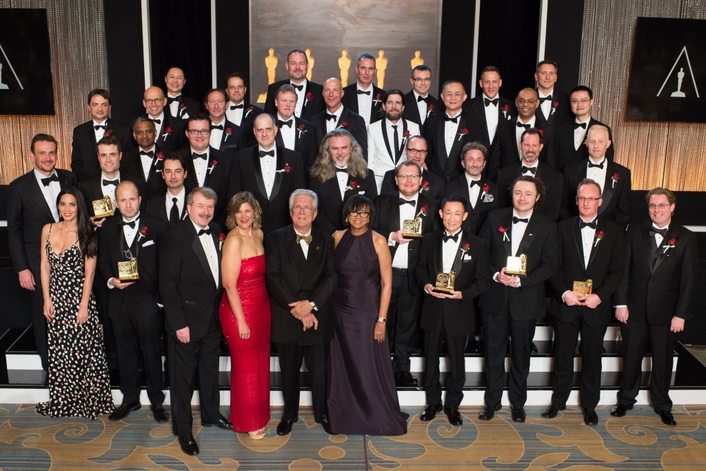 This year's AMPAS Scientific and Technical Award event was hosted at the Beverly Wilshire by actors Olivia Munn and Jason Segel. Munn and Segel presented SMPTE with its special award, with Segel remarking, "SMPTE marvelous." The Society received a standing ovation. Video of SMPTE's award presentation is now available at http://bit.ly/213kl6e. Portions of the Scientific and Technical Awards Presentation will be included in ABC's Oscar telecast on Sunday, Feb. 28, at 7 p.m. EST/4 p.m. PST, live from the Dolby Theatre® at Hollywood & Highland Center®.

About the Society of Motion Picture and Television Engineers® (SMPTE®)
Winner of an Oscar® and multiple Emmy® Awards, the Society of Motion Picture and Television Engineers® (SMPTE®) is a global leader in the advancement of the art, science, and craft of the image, sound, and metadata ecosystem. A professional membership association that is internationally recognized and accredited, SMPTE advances moving-imagery education and engineering across the communications, technology, media, and entertainment industries. For a century, SMPTE has published the SMPTE Motion Imaging Journal and developed more than 800 standards, recommended practices, and engineering guidelines.
More than 6,000 members — motion-imaging executives, engineers, creative and technology professionals, researchers, scientists, educators, and students — who meet in Sections worldwide, sustain the Society. Through the Society's partnership with HPA®, this membership is complemented by the professional community of businesses and individuals who provide the expertise, support, tools, and infrastructure for the creation and finishing of motion pictures, television programs, commercials, digital media, and other dynamic media content.