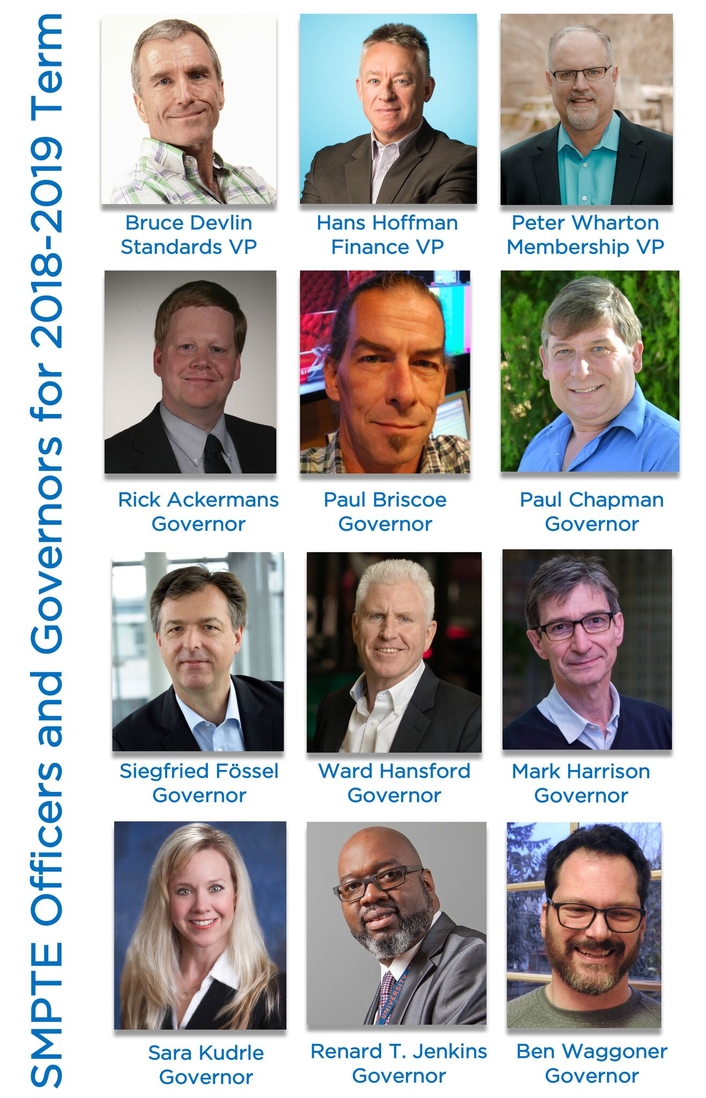 SMPTE®, the organization whose standards work has supported a century of advances in entertainment technology and whose membership spans the globe, today announced that the Society has elected its new officers and governors for the 2018-2019 term.

"This year's elections bring to SMPTE a powerful blend of experience, leadership, and innovation in driving our industry forward," said SMPTE President Matthew Goldman, who is also senior vice president of technology, TV and media solutions at Ericsson. "New and returning officers and governors represent the businesses and institutions dedicated to enabling the next generation of content creation, distribution, and consumption. They will play an instrumental role in maintaining the growing momentum of the Society's standards, education, and membership initiatives."

Peter Wharton, vice president of technology at BroadStream Solutions, will become the Society's Membership Vice President, currently serving as Secretary/Treasurer. Two new officers were also elected for the next term. Bruce Devlin, founder and CEO of Mr. MXF Ltd. and current SMPTE Governor for the UK Region, will become the Standards Vice President. Hans Hoffmann, senior manager of media production technology for the European Broadcasting Union (EBU), who has served previously on the SMPTE Board as Standards Vice President and is currently an Education Director, will now become SMPTE's new Finance Vice President.

Nine governors were elected to serve in posts throughout the world, and two of these were elected as incumbents. The re-elected governors include Paul Briscoe, principal consultant at Televisionary Consulting, who will again serve as the Canada Region Governor; and Siegfried Fössel, head of the moving picture technologies department at Fraunhofer IIS, who will continue as the EMEA, Central, and South America Region Governor. Rick Ackermans, principal engineer at MVA Broadcast Consulting, will return from a hiatus to serve as Southern Region Governor. Sara J. Kudrle of Imagine Communications, a current SMPTE Education Director, will serve in the role of New York Region Governor, having served previously as a Governor of the Western Region.

Officers and governors elected for the 2018-2019 term will serve on the SMPTE Board of Governors along with other board officers and regional governors. Directors of specific areas — standards, education, and membership — serve in an advisory role to the board, and they will be appointed in January 2018 to one-year terms. At that time, the SMPTE Board of Governors will also appoint a new secretary/treasurer.

Officers who were not up for re-election and who will continue to serve on the SMPTE Board of Governors include Matthew Goldman of Ericsson as President, Robert P. Seidel of CBS as Past President, Patrick Griffis of Dolby Laboratories as Executive Vice President, and Richard Welsh of Sundog Media Toolkit as Education Vice President.

About SMPTE®
For more than a century, the people of the Society of Motion Picture and Television Engineers® (SMPTE®, pronounced "simp-tee") have sorted out the details of many significant advances in media and entertainment technology, from the introduction of "talkies" and color television to HD and UHD (4K, 8K) TV. Since its founding in 1916, SMPTE has received an Oscar® and multiple Emmy® Awards for its work in advancing moving-imagery engineering across the industry. SMPTE has developed thousands of standards, recommended practices, and engineering guidelines, more than 800 of which are currently in force today. SMPTE Time Code™ and the ubiquitous SMPTE Color Bars™ are just two examples of SMPTE's notable work. As it enters its second century, SMPTE is shaping the next generation of standards and providing education for the industry to ensure interoperability as the industry evolves further into IT- and IP-based workflows.

SMPTE's global membership today includes more than 7,000 members: motion-imaging executives, creatives, technologists, researchers, and students who volunteer their time and expertise to SMPTE's standards development and educational initiatives. A partnership with the Hollywood Professional Association (HPA) connects SMPTE and its membership with the businesses and individuals who support the creation and finishing of media content.