Smartphone Chip Can Only Do So Much, It’s up to Your Carrier 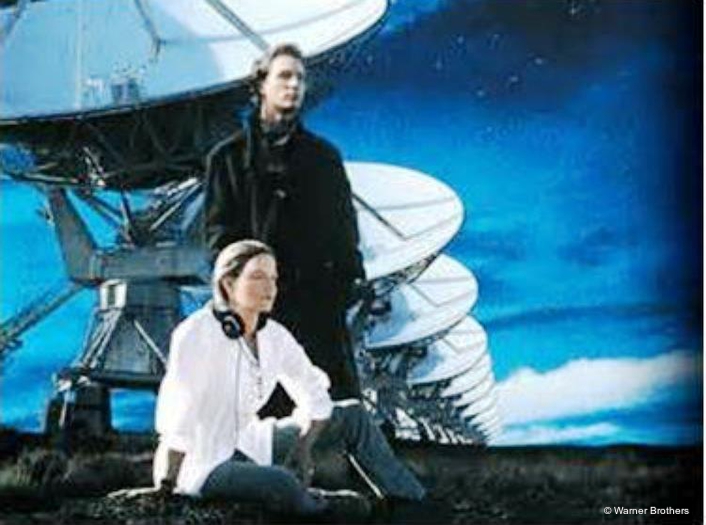 .
“We shop at home, we surf the Web ... at the same time, we feel emptier, lonelier and more cut off from each other than at any other time in human history...” – Palmer Joss, Contact, 1997
Right after storage firms, chip companies are the most unappreciated folks in the industry. They plug away making things that do more and more for less and less and all you say is ”so”?

Take the smarphone in your pocket/purse.
You use it to surf the Web, send and receive emails, play games, watch movies and, just for the hellovit, you occasionally make a phone call.
It’s hard to believe that just 40 years ago, your sleek powerhouse was a knapsack that elites and wannabes carried around (even at a price tag of $4,000) just in case someone called. 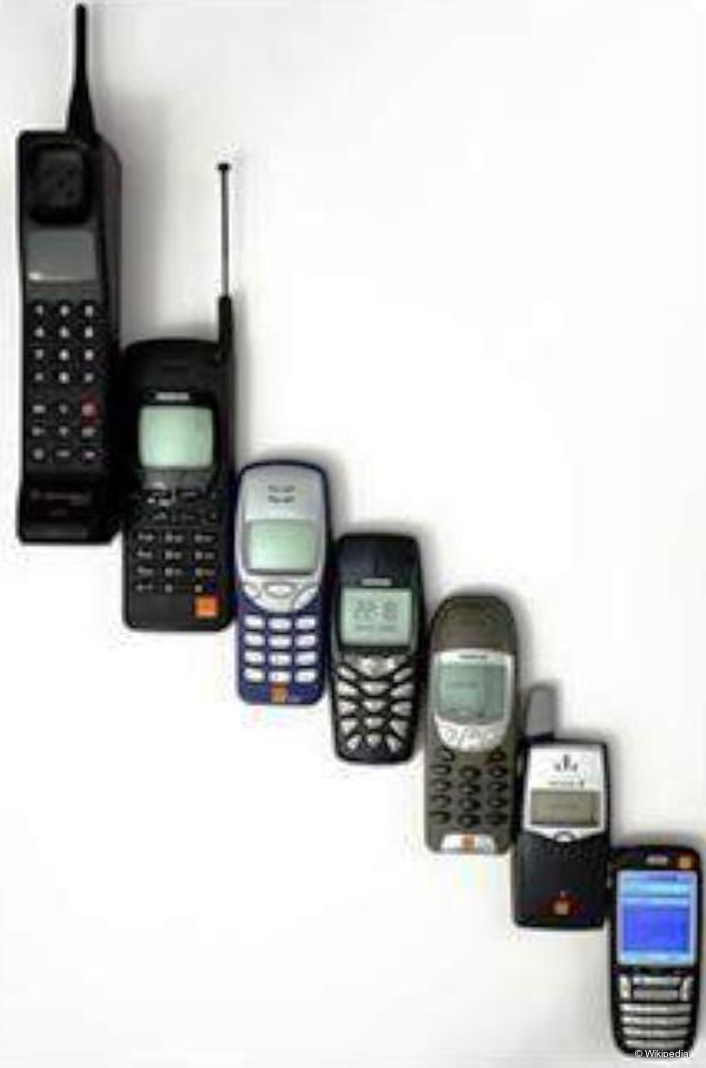 Generations – Mobile phones have made a wide range of remarkable advances since Motorola’s first “brick” to today’s high-performance, economic smartphone that lets users send/receive data, search the Internet, stream audio/video and even make a call.
Today, the one-trick pony does everything and increasingly has control of/contact with everything/everyone.
Ellie Arroway commented, “One down, couple of billion to go.” 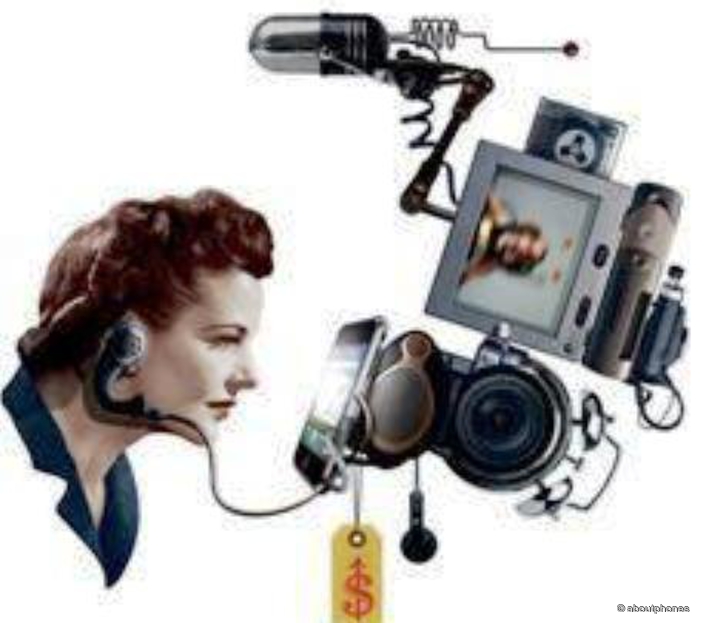 Because We Can – Today’s mobile phone is vastly different from the first one you probably owned. Now, it’s a camera, music player, TV set, iNet connection, miniature studio and a complete computer/communications device that fits easily into your pocket or purse.

Most of the stuff on the smartphone is what one analyst referred to as “noveltyware,” cutesy stuff.
Although it leads the smartphone chip marketplace, few people really know – or care – much about Qualcomm.
While attending their recent “What’s Next in Mobile” event in the Bay Area, I had this urge to pull out my S3, crack it open and see if it housed one of their chips that was delivering all of the super performance features/capabilities they were talking about.

I resisted because I didn’t want to be crushed or embarrassed … again.
It would be a lot easier to know if they could slap their logo on the device or have people brag that their technology is inside, but they have to be satisfied with:
-        Running ads for a cute little Snapdragon
-        Delivering eye-popping performance and provocative/advanced features
Their mobile focus is important to mere mortals because smartphones sales surpassed those of featurephone this year. 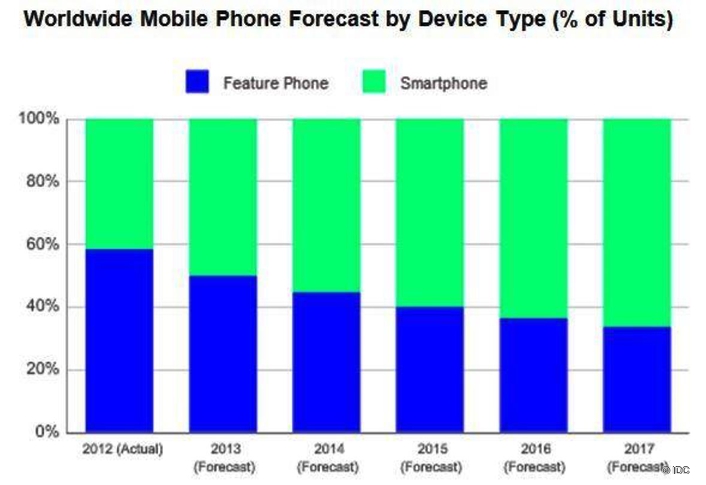 Smarter Phones – The sale of smartphones surpassed those of featurephones for the first time this year; and even if prices remain unchanged the percentage shift will continue. However, if mid- to low-end smartphones are introduced this next year, the disappearance of featurephones could take place very quickly.

Tiered Smartphones
During the first quarter of the year, device players shipped more than 418M phones and smartphones accounted for more than 51.6 percent of them, according to IDC.
In developing countries, the smartphone represents more than just something to use in making a phone call, it really is their complete computer/communications device.
Of course, for the digital generation – kids who never knew life before touchscreens and music/video on the phone – their computer is whatever device they have at the time.

While call activity hasn’t increased much, global mobile digital, internet usage has skyrocketed.
Ellie Arroway saw the information and exclaimed, “Those are all prime numbers and there's no way that's a natural phenomenon!”

Mobile Data – Smartphone usage for data rather than voice calls has matured rapidly as people increasingly use their devices for online searches, emails, texting and audio/video enjoyment.

According to Forrester, by 2017, smartphones will surpass 2.2 billion units per year.
To keep their sales machines running at full tilt, smartphone manufacturers want to persuade low-cost featurephone users to upgrade and become a part of the totally connected world.
That means a unit in the $100 +/- range.

Beyond the Calls – By introducing a new family of low- to mid-range smartphones, low income families and people in developing countries could have added computing/communications capabilities at a price they can afford. With Internet access and other limited features, people could more readily afford more versatile devices.

Economic Devices
That was a subtle part of Qualcomm’s message during their Bay Area briefing day – smartphone capabilities in a range of prices.
The problem is not everyone can afford the expensive device (and expensive carrier plans).
It goes beyond simply discounting last year’s model to a focused effort of delivering quality, value in the commodity market.
In addition, some of the biggest potential markets – China, India, Africa – are eager to produce (and use) low-cost smartphones. With billions of citizens in these areas, Qualcomm (and their competitors) see a major pent-up demand for world class smartphones.
Ellie Arroway explained, “It's bigger than anything anyone has ever dreamed of before.” 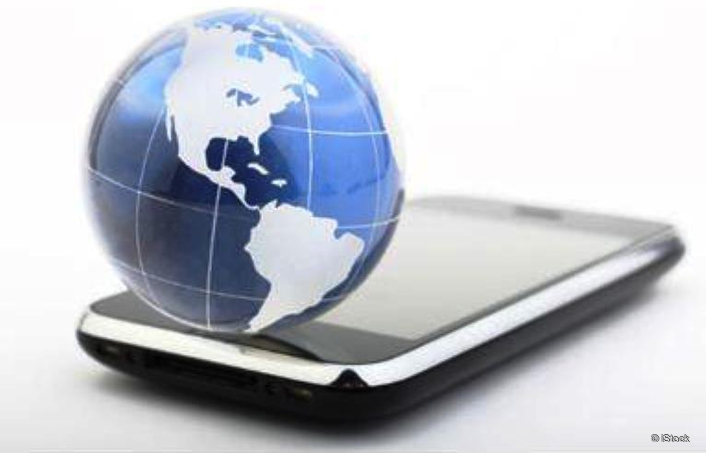 World in Your Hand – Today’s smartphones are very literally world-class communications devices in the palm of your hand.

ABI research and others have said low-cost smartphones will make featurephones another device in the museum, next to the Motorola brick.
With mobile digital traffic skyrocketing, it’s no wonder wireless companies are knocking on their governments’ doors for more bandwidth. 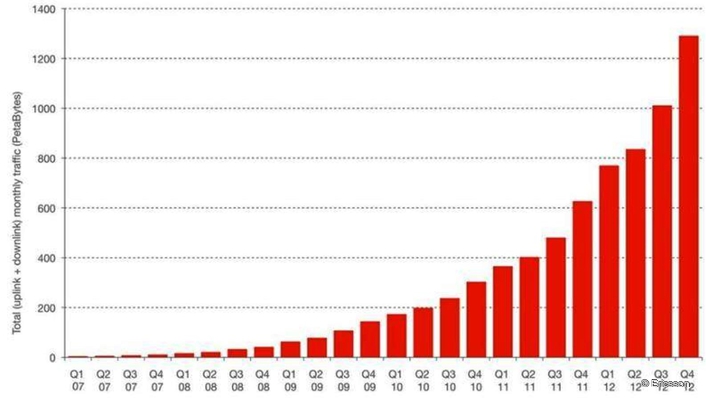 Data Spectrum – Despite the increase in smartphones, voice communications has remained relatively flat in recent years, accounting for only a modest portion of the service traffic. But data communications – web/internet searches, email and streaming video – have increased dramatically.

It’s less of an issue in developing countries because they don’t have all of the legacy wired infrastructure to carry along with them. They got into the game late and started with the less expensive, more efficient wireless technology.

Marriage of Convenience
Of course, usage has led to an uncomfortable marriage of convenience for the broadcast folks who have always viewed their airwaves as their domain. 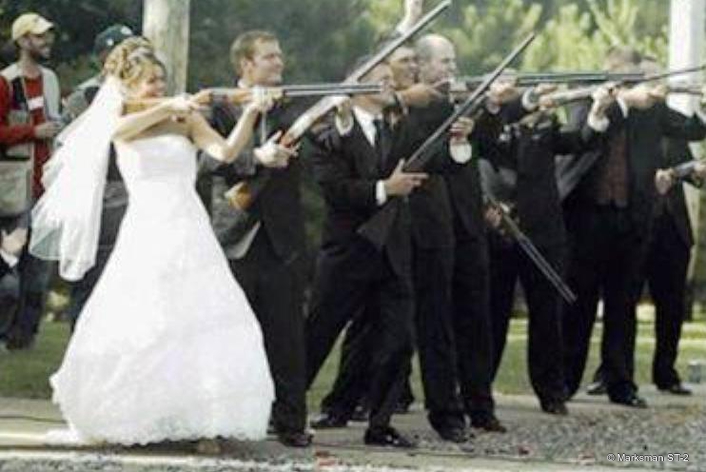 Shotgun Wedding – Broadcasters never went out looking for someone to “share” their bandwidth with but pressure from the consumer electronics industry and wireless carriers – and the FCC – got them to the altar.

But even people in developing countries have mobile phone problems and issues.
While spam sales calls and texts are a nuisance, the biggest complaints are dropped calls, slow to intermittent to zero Internet connectivity/service. 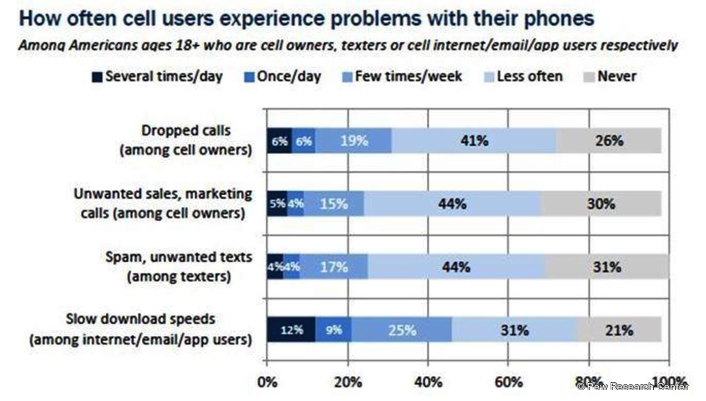 Beyond the Call – While consumers expect the same level of service performance they get with their landline phones and Internet connected devices, people continue to have problems because service coverage isn’t universal and the traffic volume can often disrupt communications.

Blocking can eliminate or minimize the unwanted stuff, but solving the signal issue is more difficult, more expensive for carriers.
And to show its industry leadership and ability to apply creativity (you might even say AhHa genius) to the problem, Qualcomm announced a brilliant (IMHO) idea … piggyback on the small WiFi cells almost every office, apartment, home has.
The darn thing is only being used a fraction of the time.
Well, it does need a name better than “neighborhood small cells” to succeed – like when outsourcing IT became cloud computing – but still it’s a helluva’ idea!
As Ellie Arroway said, “I've always believed that the world is what we make of it.”

Home Connection
Their idea could be integrated into set-top boxes, game consoles and home broadband gateways.
Adding huge and ugly cell towers is expensive; but small cell networks would be a fast, cheap and almost instant way to make use of the radio spectrum carriers already have.
Of course, they can always use even more spectrum. 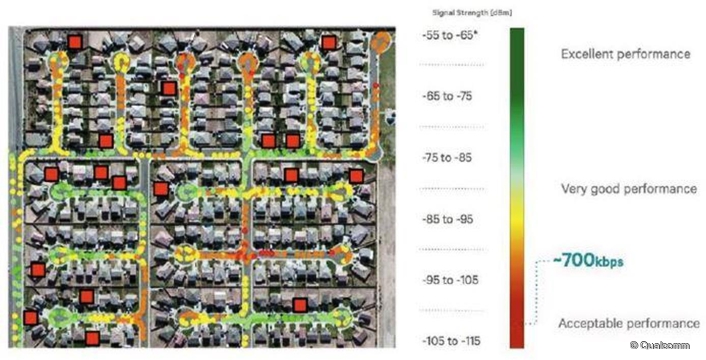 Test Service – To show government communications regulators and wireless service providers that neighborhood small cell networks could deliver good to excellent service with a minimum of investment, Qualcomm installed devices in select communities and then tested the performance levels. With a minimum of home installations, the company showed that the largely unused spectrum was sufficient without the costly, unsightly deployment of cell towers.

Qualcomm has tested the concept in several neighborhoods and it gives very good outdoor coverage.
By using the technology in as few as one in five homes, your carrier could improve network capacity 1000x to stream your video better, faster … our kids can’t wait!!
In-home small cells like these could reduce the cost/complexity of adding public small cells and linking them to wired networks.
It’s such a great idea I’m sure our family’s carrier will probably want to upgrade our home gateway at no cost … yeah, right!

The problem is the femtocell you have right now is essentially an in-home cellular base station, meaning its signals interfere with other signals outside the house. If carriers “encourage” you to replace them with something that works better inside and out, everyone wins.
Think about it, you have the bandwidth you want for everyone in the house and almost instant “spare” wireless service everyone could use.

Turning the Tanker
There are little things to overcome like the backward, complex metering; billing and accounting things service providers have in place; but how difficult could it be for them to think outside of the box?
Oh yeah, they’re “the phone or cable company.”
Forgot!
But who knows, Qualcomm is pretty smart, pretty creative; maybe they’ll come up with a better business system for them. 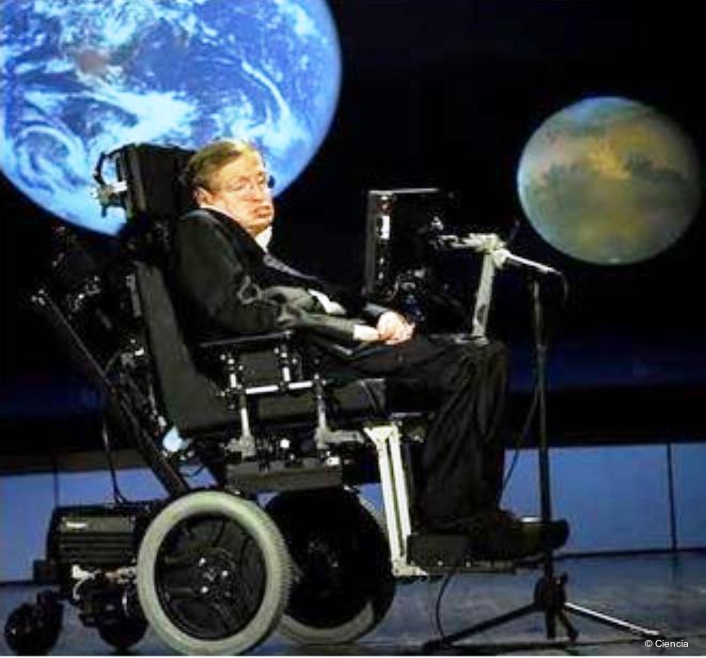 Stephen Hawking would like to see it done so he could agree with the NASA voice, “We have begun the full scale test of Earth's first system built by the sharing of knowledge with a neighbor in our Universe.”

CES …The Greatest Show on Earth
The End of an Era, The End of New Devices
Machines, Things, Big Data, Quants - Next Stop…