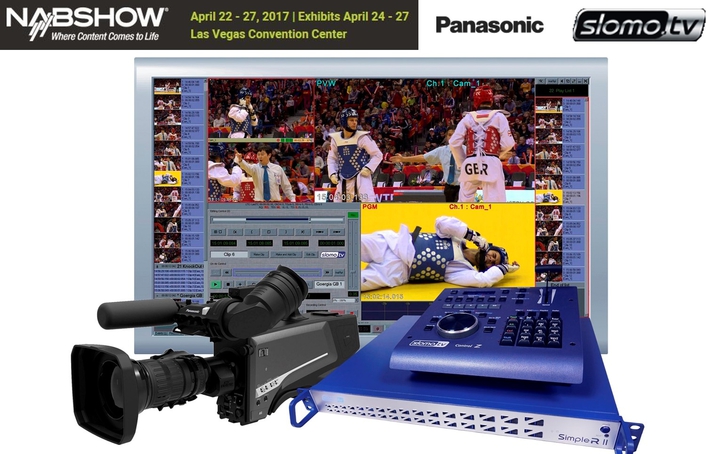 Today, slow motion replays are a standard feature of major live sports broadcasts, however the necessary SuperMo cameras are a substantial infrastructure cost. Until now, only the premier league broadcasters and production facilities could afford these cameras and replay systems within their OB vehicles. Now, Slomo.tv in partnership with Panasonic has developed a significantly lower cost, but equally sophisticated slow motion solution.

In developing its Simple RII server, Slomo.tv has added a special mode in its replay systems for integration with high-end cameras, such as the Panasonic AK-HC5000 4X SuperMotion camera. This server-based system can record video in its native standard (1920 50p/60p or 50i/60i) with simultaneous replay of two clips with transition between them. Also, clip search and NLE marking is available during playback.

The Simple RII server can record up to 266 hours of 100MBit HD video. Also, it possesses three graphics outputs for GUI, Multiviewer and Game Analyzer functions. An intuitive user interface and control panel make the Somo.tv server easy to understand and operate, which is important when used during the most emotional charged sporting events, where on air operations are mission critical and any down-time spells disaster.

STARTTV has broadcast more than 1000 sport events from different venues

“Our first test of the Panasonic AK-HC5000 with Slomo.tv’s new Simple RII server was during the Euro Cup Handball qualification and it fully convinced us that this combination is very well matched to our needs despite its modest price,” explained the Chief producer of TVSTART, Vladimir Shirokov. “It gives us the flexibility we need for live sports broadcasting. It leads us to buy more Panasonic gear and we will employ Slomo.tv servers, which we have used for many years.”

At the NAB show, (Booth C11125), Slomo.tv engineers and users will share their unique experience of this system implementation.

About STARTTV
Moscow-based production company, STARTTV is one of the main players in sports television production market in Russia and CIS. Having its own production base the company provides TV production services for many local and International sport events. Over the years, STARTTV has broadcast more than 1000 sport events from different venues. STARTTV technical facilities include: two HD OB vans supporting 8-16 cameras; HD Fly Away production cases 8-16 cameras; two HD DSNG + OB VAN – 8 cameras; 1 HD DSNG.

About Panasonic
Panasonic Corporation is a worldwide leader in the development of diverse electronics technologies and solutions for customers in the consumer electronics, housing, automotive, enterprise solutions and device industries. Since its founding in 1918, the company has expanded globally and now operates 474 subsidiaries and 94 associated companies worldwide, recording consolidated net sales of 7.553 trillion yen for the year ended March 31, 2016. Committed to pursuing new value through innovation across divisional lines, the company uses its technologies to create a better life and a better world for its customers.

About Slomo.tv
Established in 2007, the company over the last decade has successfully introduced and brought to the market place complete lines of high quality multi-channel professional video recording and instant replay servers for tapeless video production technology. Slomo.tv systems, such as Dominator and Simple R, are widely used by major TV channels, and the company’s video judging system for sports, videoReferee®, has become an integral part of many sport arenas worldwide.