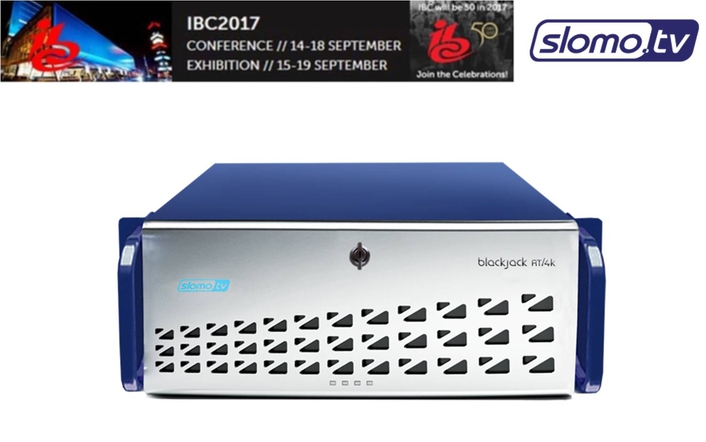 BlackJack AT/4K is the latest product of slomo.tv's long-term development strategy that sees it fundamentally changing the design capabilities and affordability of large-capacity broadcast video servers.  Building on the success of slomo’s compact design (2U) RED ARROW server, which was introduced last year, the new BlackJack AT/4K server provides all the resources required for replay and recording for editing in 4K/3G/HD formats.  Working in 4K replay mode, the BlackJack AT/4K server simultaneously supports four input channels and two output (replay) channels with transition effects between them, as well as simultaneous search on all channels with marking of clips.  In recording for editing mode it supports recording of up to six inputs of 4K video signals.

The BlackJack AT/4K server possess a compact 4U form factor, and offers resilient reliable operation in a broad range of ambient temperatures. It provides a diversity of hardware options: for example, Sony XAVC 4K codec support allows video recording of XAVC 480/960 codec and provides NLE MXF files without transcoding and export.  With this option, the server can record up to six discrete 4K video signals to NAS for subsequent editing.
In the basic configuration, the server uses proprietary DCT-based I frame codecs (with 1200 Mb/sec stream), and an Apple ProRes 4K codec for contributing video content for editing systems.

In addition to working in 4K mode, this server enables operators to work in 3G / HD / SD modes. In these modes, the number of recording channels when working with replays reaches 20 at four physical outputs and eight playback channels, enabling up to four replay operators to work simultaneously work on the same server.
In the recording for editing mode, the server records up to 24 channels. The storage capacity of the built-in SSD disk subsystem is 266 hours of HD video.

“We learned a lot from the customer feedback we received from RED ARROW: as a result, we have designed this powerful server to meet production needs of the OB vehicle builders and end-users that are migrating to 4K format,” commented Igor Vitiorets, CTO at slomo.tv.  “As the cost of 4K cameras and production switchers decreases, the need for affordable 4K replay servers is growing.  In developing BlackJack AT/4K, we are targeting the middle and high-end segments of the sport broadcast market with an advanced replay server, setting a new standard in the number of accessible recording and replay channels. Based on early user feedback, we’re confident that this product’s robustness and performance will generate great interest.”

This server supports all available 4K50p/4K60p broadcast formats via 4 x 3G SDI. BlackJack AT/4K displays all the features and functions that slomo.tv servers are known for.  Its SSD-based storage enhances performance and reliability, while a second system disk starts the server in case of a problem with the primary disk. A USB Recovery Stick allows the user to instantly restore the system.
The company provides remote internet-based Tech Support, which can analyze and diagnose operational issues, change specific system settings and update the software, dramatically reducing system downtime.