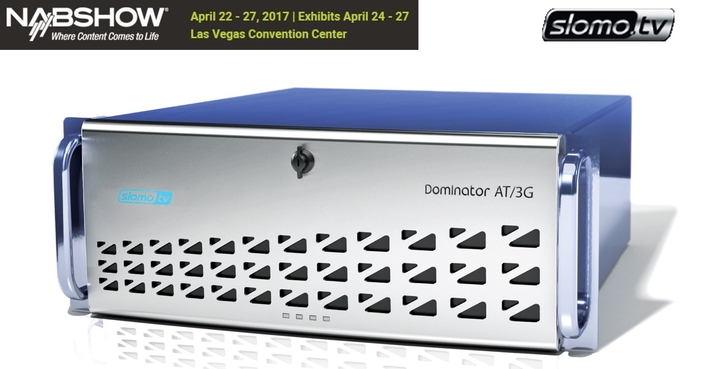 Building on the success of previous models, the new AT/3G line offers enhanced replay capabilities and two operators can work simultaneously on the same unit. Since the system has four independent graphic outputs each operator can work on the main GUI and a separate multi-viewer monitor simultaneously. In replay mode, the operator can display up to six recording channels and two video playback channels, as well as having access to five channels for clip marking and playlist editing.

Simultaneously, video data can be recorded on external file storage systems, as well as on internal RAID storage to secure the recorded files. Dominator AT/3G can be connected via two 10GbE and two 1GbE channels to a network attached storage (NAS) or directly to storage area network (SAN) using its optional 16G fibre channel interface. Also, the system can be connected to SAS-compatible storage. It can be connected to SAN or NAS practically unlimited storage, providing data transfer rates up to 720-1400 megabytes per second. A high speed SAN removes practical limits of recorded video, which is important when recording from multiple 3G/HD cameras, and particularly when simultaneously supporting several of Super Motion cameras.

Dominator AT/3G can be networked in various ways with other Slomo.tv systems by using the company’s networking option.

“Our mission at Slomo.tv is to develop server-based production solutions that are appropriate and affordable to the widest range of TV companies, both large and small, saving them time, money and stress,” commented Igor Vitiorets, CTO at Slomo.tv. “In developing the new Dominator AT/3G, we have achieved the next stage in the evolution of our main workhorse server series. Customer reaction has been very positive and we look forward to a busy show.”

About Slomo.tv
Established in 2007, the company’s team of dedicated specialists has a combined experience of more than 100 years in the fields of Digital Video, Software Development and IT. Its raison d’être is to create maximum use of on-the-shelf components, scalable architecture, compatibility with widely used non-linear editing systems, and the ease of new technology implementation into existing TV production structure.

Over the last decade, the company has successfully introduced complete lines of high quality multi-channel professional video recording products. Slomo.tv has brought to market a number of effective solutions for tapeless video production technology. Products were test-marketed in Europe and became de facto industry standard in Eastern Europe and the Baltic region. Slomo.tv systems, such as Dominator and Simple R, are widely used on major TV channels, and the company’s video adjudication system for sports, videoReferee®, has become an integral part of many sport arenas worldwide.