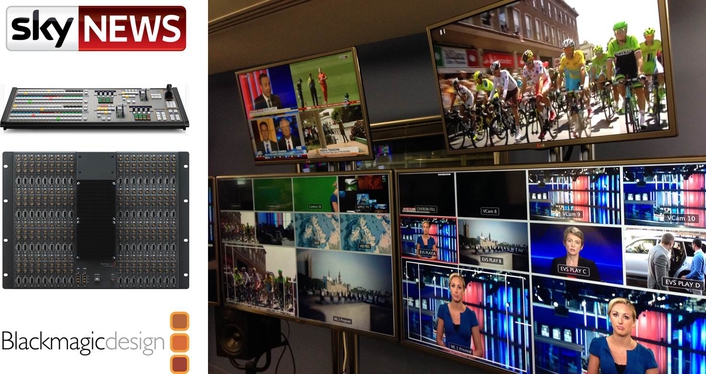 .
Blackmagic Design today announced that Sky News in the UK has implemented Blackmagic’s ATEM 2 M/E Production Studio 4K with an ATEM 2 M/E Broadcast Panel and Smart Videohub as part of an overhaul to the news organization’s broadcast systems in “Studio D”.

A small team of multi skilled staff use the studio to create three minute news summary, which are then published across Sky News’ digital outlets. The studio also has the layout and facilities available so that a bigger gallery set up, with producer, director, vision mixer and sound supervisor, all managed by a technical director, can be deployed on more complicated projects if the need arises.

Creating those news summaries had been very time consuming reveals veteran anchorman Martin Stanford. “This used to be a long edit suite job, marrying presenter video with news footage, adding information straps and so on. With the new studio workflow we can now create a bulletin in real time, mark the in and out, and then post to all digital devices. That has reduced the publication time lag from over an hour to a matter of minutes.”

“Every source, whether it’s station wide or local to the studio, goes through a Smart Videohub router to an assigned channel on the ATEM 2 M/E Production Studio 4K switcher. That includes three of our existing HD studio cameras, which have been repositioned onto the studio floor, as well as all of the monitoring in the gallery and on the studio floor, ensuring maximum flexibility.” 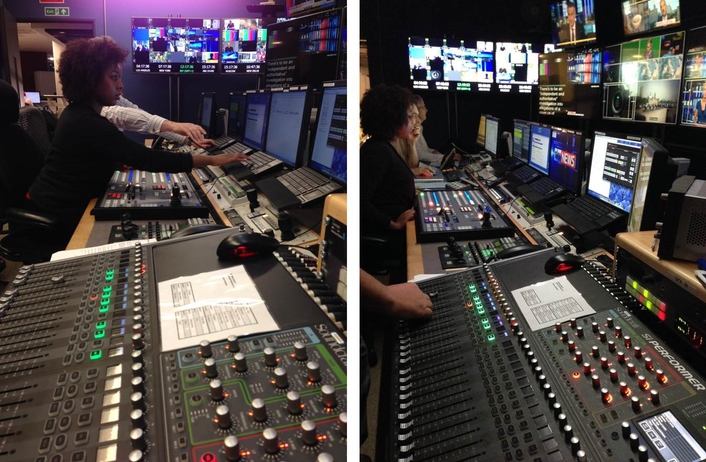 Four pre existing playout channels from the Sky News media server are connected to the switcher, as are three outside source channels, which can be populated by almost any source from the central Sky router, and our local feeds from a Mac computer and Apple TV unit, allowing us to connect devices via airplay.”

The lead project engineer, George Davies, Head of Operations at Sky News, explains they also assigned all three HD camera channels their own keyer. “Each camera has assigned to it an ATEM Television Studio switcher as a keyer. This means we can give the vision mixer access to camera sources with backgrounds already chroma keyed,” he explains. “Interviews and other program elements really are much easier to film against green when you don’t have to worry about cameras and keyed images at the same time!”

“For staff new to gallery operations the Blackmagic workflows we’ve implemented in “Studio D” have been both easy to learn and use, while the broadcast standard architecture and workflows have been easy enough to understand and adapt to for our more skilled operators,” concludes George. “Blackmagic’s ATEM 2 M/E Production Studio 4K offers good levels of functionality for the price, while the broadcast panel, provided us a reassuringly familiar layout for staff.”