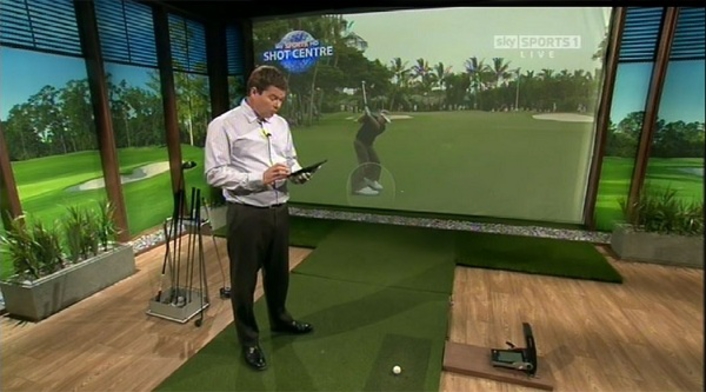 Sky Golf Live Show
iPad support has been added to tOG-Sports. This allows use of the iPad as a hand held touchscreen device that delivers the full range of telestration, analysis and VT control that is featured in tOG Sports.

The iPad connects wirelessly to the main tOG Sports graphics system that combines delivery of live broadcast quality HD SDI output with HD clip control and content from remote video servers such as EVS. This is important as it gives presenters a tool they are immediately familiar with both in the iPad itself and the tOG-Sports style of interface. It also frees them from the shackles of traditionally mounted touchscreens, making it easier to face camera and even share the telestrator with guests and co-presenters.

Sky Golf moved into a new purpose built set in the recently built BSkyB Studios facility in London, with its first TX on 6th January 2012. This meant an opportunity for a complete rethink of the studio content for the channel and the adoption of new technology. Already a user of tOG Sports, the production team were using a desktop mounted touchscreen for swing and play analysis, selecting clips on EVS video servers, jogging them backwards and forwards as required and using the interactive touchscreen to add graphics such as swing angles or distances from the pin.

The challenge for the new studio was outlined by Jason Wessely, Exec Producer Sky Sports Golf:
“We wanted to move the telestration element of the show away from a desktop mounted touchscreen and literally put it in the presenters’ hand, opening up the ability for presenters to combine live analysis on VT with actual examples of golfing techniques in the studio. tOG Sports’ new support for the iPad delivers this, and it’s on screen integration with EVS clips makes it easy and fits into our workflow.”

Sky Golf’s new studio features the iPad based tOG Sports telestrator, a giant video projection back wall and a golf simulator for taking actual shots based on technology from Pinpoint. Best of all, everything is seamlessly integrated on air – the studio based analyst can select a VT clip of a swing from the iPad, play it on the giant screen. Jog back and forth and draw on it to discuss aspects of the swing and then switch to a virtual view of a fairway or approach to demonstrate with an actual swing. RT Software’s support for the iPad meant this could be achieved quickly and at almost zero cost, preserving the existing investment in tOG Sports and its proven telestration capability for golf.

tOG-Sports is an industry de-facto sports analysis graphics system for broadcasters. It provides the ability for a graphics operator to prepare clips which can be played out live or saved for use later, and on the same system allows studio presenters to use a touchscreen to select clips for analysis and use a touchscreen to add graphics to help explain tactics and nuances of the play.

It offers a close integration with video servers such as EVS and Grass Valley, and features high end technology such as software chromakeyers and video based camera tracking allowing 3d graphics to be tied to the pitch and player and ball trails created. It is in use at Sky in numerous locations and geographies, ESPN, IMG Premier League Productions, BBC, Al Kass, Al Jazeera and many other broadcasters and graphics services companies worldwide.