Central to Sky Germany's innovative design is the use of a sophisticated camera robotic system
Sky Deutschland has launched its new channel - Sky Sport News HD - and has chosen to rely on Vitec Videocom brands for its slick new automated production including Autoscript prompting, low energy LED lighting from Litepanels and Vinten Radamec broadcast camera robotics.

Rather than isolate the channel presentation and programming in a separate studio, Sky Deutschland has elected to build a 360˚ studio space in the centre of the newsroom it has built for the launch of the channel. The challenge for the designers was to maintain very high production values in the confined space, not least the limited headroom of approximately 4m. 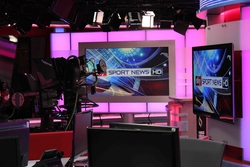 Central to this innovative design is the use of a sophisticated camera robotic system, featuring six Vinten Radamec Fusion FP-188 robotic pedestals with FH-100 heads. These, along with two Telemetrics cameras, are controlled by the Vinten Radamec HDVRC. A large number of pre-set positions are programmed into the controller in advance, and during transmission camera angles are selected by the Mosart production automation system. This means that, during normal programming, the studio needs no operator for cameras, with the floor manager providing any manual adjustments necessary to accommodate guests.

Sky Deutschland is a strong advocate of good environmental stewardship and sees energy reduction as an important goal. For this reason alone, equipping the studio with Litepanels’ LED lighting was a logical choice. The limited ceiling height would also have caused problems of excessive heating using conventional fixtures, so the dramatic reduction in power consumption using Litepanels has proved a double bonus. 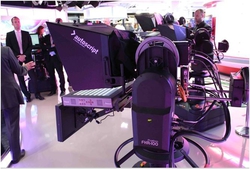 Sky channels in Europe are regular users of Autoscript prompting systems, making them a natural choice for the new studio. In this application their seamless integration with the iNews network means scripts are automatically downloaded, updated and cued up for the presenters as required.

Francesco Donato, Vice President Broadcast Operations, Sky Deutschland: "Launching a new channel is always an exciting challenge. We already had good experiences with Vitec at Sky Italia and again they have supplied us with great equipment here in Germany for our new 24-hour, sport news channel, Sky Sport News HD. Due to the excellent experience with Vitec Videocom group products we felt complete confidence in specifying Autoscript, Litepanels and Vinten Radamec for Sky Sport News HD.”

About Vitec Videocom
Vitec Videocom brings together some of the most respected, most innovative and most sought-after brands in the industry: Anton/Bauer, Autoscript, Litepanels, OConnor, Petrol, Sachtler, Vinten and Vinten Radamec. It acts as an endorsing brand for these market-leading broadcast, film and pro video products, encouraging multi-brand system sales and simplifying the way that customers worldwide do business.Vitec Videocom is an operating division within the Vitec Group, an international business serving customers in the broadcast, photographic and military aerospace and government markets. Vitec is based on strong, well known, premium brands on which its customers rely on worldwide.