From Sit Downs to Skateboards Prindle Relies on Norbert 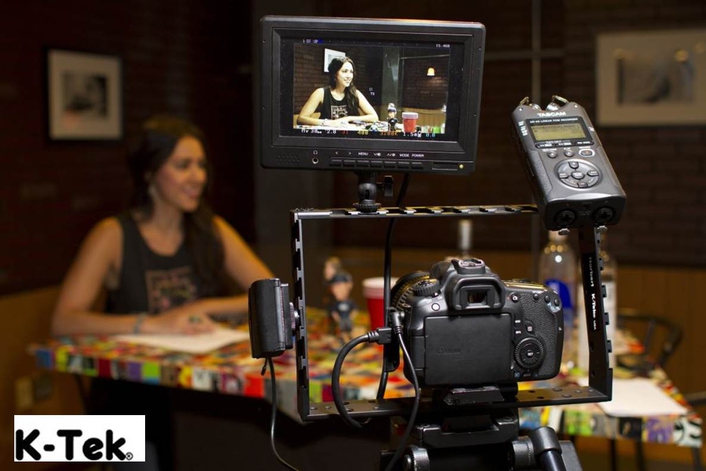 While doing a weekly interview/talk show produced for YouTube’s ‘Ride Channel’ done in a bar-like setting at 900 Films, with two hosts and two guests talking and drinking in a very casual atmosphere, Prindle uses a simple Norbert set up. “The lights in this set are low due to the design of the building,” he explains. “This puts them just out of frame with the camera. When I first started shooting the show, my eyes would tire of the bright lights. Then, by testing different Norbert attachment points, I was able to put the lights in the right place. In addition, I found using a short arm and attaching my monitor off the bottom of Norbert makes all the difference in the world to my viewing angle. This combination did away with eye fatigue.  If your eyes are strained or tired, there is no way you are going to be doing as good of a job focusing as you can when they are comfortable and relaxed. Norbert allows me to make custom solutions to every kind of problem.”

While shooting a recent sports documentary for ESPN, Prindle found himself in a very different situation, but a Norbert set up came to the rescue. “The subjects, world-class skateboarders, didn’t always want to be interviewed,” he admits. “Shooting a subject like an actor who either wants to talk or is obligated by their contract, is very different than shooting someone who could care less about being on TV. For the latter, you never know how much time you will have. In these cases, you have to set up your gear quickly and tread lightly.

“For me, shooting skateboarders means using two LED lights along with natural light in most cases,” he explains. “I could either use them on a stand, or mount them on Norbert with a short arm. At times, during these ESPN shoots, I would set up Norbert with the monitor, Lav receiver, audio monitoring cables and lights, before I even knocked on the door. The set up was compact and easily positioned. I’d be in position in minutes.

“With Norbert, there are no surprises,” he adds. “Using larger gear, more pieces, and/or a bigger crew just doesn’t work. Norbert is compact. It doesn’t intimidate people who are not used to being filmed. It’s just a fact. The quicker you get your basic gear in, the more comfortable your subjects are, and you can get in and out quickly. They get comfortable with me. And, when I have to contact them months later, that comfort carries over to the next interview.”

Prindle has much to say about Norbert’s ability to make his shoots go smoother and faster. “With the 20 plus shoe mounts you can put your gadgets almost anywhere,” he says. “There are many ¼” and 3/8” threaded holes so you really aren’t going to find a video accessory that cannot be fit. I use Canon DSLR’s, and I appreciate that the frame is slanted forward. I also like being able to use the quick release plate along with the slant, so I am easily able to make room for the HDMI and USB ports on the side. This is huge for me, as I monitor audio using the USB port and Magic Lantern software. Norbert’s set up doesn’t block the DSLR access door, so you don’t have to bend cables and possibly weaken your connection.

“I’ve also noticed that the baseplates that K-Tek makes fit perfectly with Manfrotto/Bogen gear, which so many people carry,” he continues. “K-Tek isn’t flashy. It’s quality machined, sturdy gear that you can quickly set up and rely on. The people there are genuine, want to make great video and audio gear, and most importantly listen to your feedback.”

Jared Prindle’s interview/talk show and skateboard productions are ongoing projects for 900 Films, a company dedicated to youth culture, lifestyle and action sports. They can be seen everywhere, from YouTube to ESPN and iTunes to podcasts and standard broadcast channels.