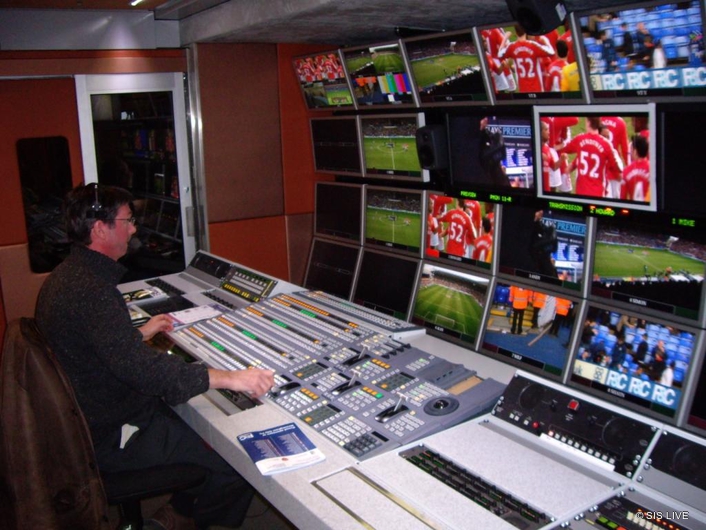 Production Area SIS LIVE OB1
SIS LIVE, one of Europe’s largest outside broadcast (OB) and uplink supplier, has unveiled its latest new-generation, super-sized outside broadcast vehicle, OB 1. The 24-camera, 14.6m x 5.65m truck is the largest OB vehicle in the UK. The state-of-the-art production unit is fully high definition (HD) throughout and 3G capable. Its first job was to cover Match of the Day for BBC Sport and it is now moving on to two more very big BBC broadcast events, the Boat Race and extended coverage of the 2010 John Smith’s Grand National from Aintree on 10th April.

“SIS LIVE is delighted to launch OB 1, the company’s biggest OB vehicle ever and the most innovative and advanced in Europe. OB 1 has been designed in close consultation with our customers and offers a huge amount of flexibility and advanced engineering features for major sports and other outside broadcast events,” says David Meynell, Managing Director, SIS LIVE.

OB 1 is the third advanced OB vehicle designed by SIS LIVE to offer producers the latest production facilities wherever and whenever they are needed. The elegant modular design of the interior of OB 1 gives producers maximum flexibility to set up the vehicle to best suit their needs. Anyone who has used the other two new-generation production units, OB 3 and OB 7, will instantly feel at home in OB 1.

Julian Boden, Head of Engineering, SIS LIVE, says: “OB 1 is an extremely powerful OB. We have packed in as much of the very latest technological equipment as possible. We have designed the truck with major events in mind, such as the Wimbledon Championships and Open Golf. It also works seamlessly with our other new-generation vehicles, OB 3 and OB 7, offering the most powerful OB combination in Europe. The flexibility and scale that OB1 can offer our customers we would hope will appeal to a broad base and will enhance any broadcasters production”

OB 1 operates up to 24 Sony HDC-1500R multi-format cameras plus radio cameras as required. The 14.6 metre long vehicle has triple expanding sides which open out along the entire length, giving a huge 5.65 metre width when extended. There are two production control rooms, which can become one single space for the largest production jobs. This is combined with 2 separate audio mixing areas, a large VT production control room, VT slo mo area featuring 9 x EVS hard disk recorders and 8 x HDCAM SR recorders. There is also a separate Final Cut Pro edit suite. OB 1 is based around a powerful 576 inputs x 1152 outputs Evertz EQX matrix with embedded audio, featuring a Sony MVS-8000G video switcher and Calrec Alpha and Omega Bluefin digital audio mixers, which deliver 5.1 surround sound. The EQX matrix also powers the advanced multi-viewer technology in the production areas, which allows a producer to set up the monitoring precisely for individual events. A total of 28 x 23-inch displays are each able to display up to 4 pictures, giving a total of 112 different sources if required, plus 3 x 26 inch single display monitors for transmission.

OB 1, like OB 7 and OB 3, is completely HD throughout and 3G capable. This means it can both handle 1080i/50 pictures as well as being future-proofed for 1080P/50 for progressive transmissions. The double capacity 3G infrastructure also makes the OB vehicle ideal for 3D signal processing and will allow SIS LIVE to continue to be at the forefront of this format.