Singing Is Easier With A DPA d:facto™ Vocal Mic 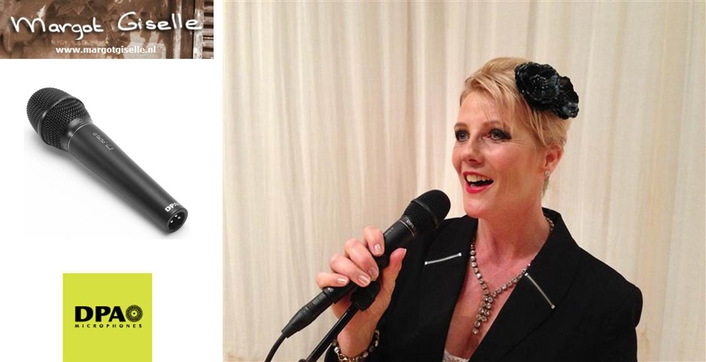 “For the first time ever I was able to hear my voice as it really sounds because the microphone only amplified the sound – it didn’t change my voice in any way,” Margot Giselle says. “It was bright, clear and warm - and by allowing me to create all the vocal colours I wanted, the DPA d:facto microphone made singing really easy.”

During her recent tour of the Netherlands, Margot Giselle worked with sound engineer Roel van Zeelst, from Dutch rental company IDAK, which has a large stock of DPA microphones. In conjunction with DPA’s Dutch distributor Amptec, van Zeelst arranged for Giselle to test the new DPA d:facto Vocal Microphone as he felt it would be ideally suited to her voice and her singing style.

“I was performing with four musicians and singing a lot of acoustic material, and wanted a microphone that would allow me to recognize my own voice, even when it was amplified,” Giselle explains. “The d:facto did exactly what I wanted and sounded so much better than any microphone I had used in the past. I was really delighted with it. The clarity and naturalness of the sound meant that I could relax on stage and just enjoy the performance.”

Margot Giselle, who trained as a classical vocalist at the Conservatory of Utrecht in the Netherlands, has worked on many musical theatre productions including Phantom of the Opera, Les Miserables, Cabaret, Annie and Cats.  She has also worked as a backing vocalist for artists such as Petra Berger and in 2011 she recorded and produced her first solo album Same Girl, which combines songs from various musicals with easy listening tracks and light pop covers. When she is not recording and performing, Margot Giselle offers vocal coaching from her private studio and at the Frank Sanders Musical Academy in Amsterdam

Margo Giselle is undertaking another tour for Spring 2013 and plans to include the DPA d:facto Vocal Microphone in her equipment list.

“The d:facto is a wonderful microphone that makes it easy for singers to sing their hearts out without straining their voices,” she says. “It also helps that Roel van Zeelst is a fantastic sound engineer who knows just how to make the microphone work for me in the best possible way.”