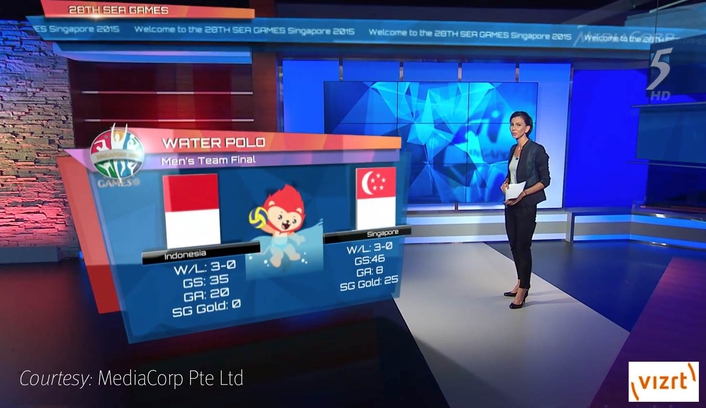 MediaCorp, Singapore’s leading media company, is moving to a brand new broadcast and production campus which will include two news production studios. These facilities will be powered and fully automated through technology from Vizrt, a leader in studio automation and production tools for the digital media industry.

MediaCorp’s new Viz Mosart systems are the first Viz Mosart solutions to be deployed in Southeast Asia. They’ll serve as the perfect complement to the other Vizrt production products currently used in MediaCorp’s existing facilities including the Viz Engine real-time compositing engine and Viz Pilot template-based graphics system. The Viz Mosart software solution has been optimised to control each individual piece of control room technology directly to ensure a seamless and hassle-free production workflow.

As part of the move to its new facility, MediaCorp has also upgraded much of its existing Vizrt production graphics platforms. The design and the implementation of the new technology and production systems is being supervised and executed by local systems integrator Qvest Media Pte. Ltd.

Norraine Yusof, senior vice president, campus technology development at MediaCorp said the choice to use Viz Mosart was to enable the full automation of the two new production control rooms and news studios on the new campus. “Moving to our new facilities is a major milestone for MediaCorp and we wanted to integrate the best-of-breed technology to make it a success.There’s continuity with Vizrt which has been a long-time technology partner and we know its solutions are the best choice for us as we undergo the next big step for the company.”

MediaCorp already has an extensive range of Vizrt equipment including Viz Pilot which will be integrated to the Octopus NRCS. It also has dedicated workstations running Viz Artist, Viz World, the Vizrt Social TV solution and Viz Ticker.

MediaCorp has also purchased two Viz Virtual Studio systems and a touchscreen system. These were used during its news coverage of the recent 28th South East Asian Games held in Singapore earlier this year.These systems will be integrated into the new MediaCorp studios allowing producers to experiment with new studio environments and creative graphics applications.

About MediaCorp:
MediaCorp is a Singapore-based media company with a complete range of platforms, spanning television, radio, newspapers, magazines, digital and out-of-home media. Today, MediaCorp has over 50 products and brands in four languages (English, Mandarin, Malay and Tamil), reaching out to virtually all adults in Singapore every week.