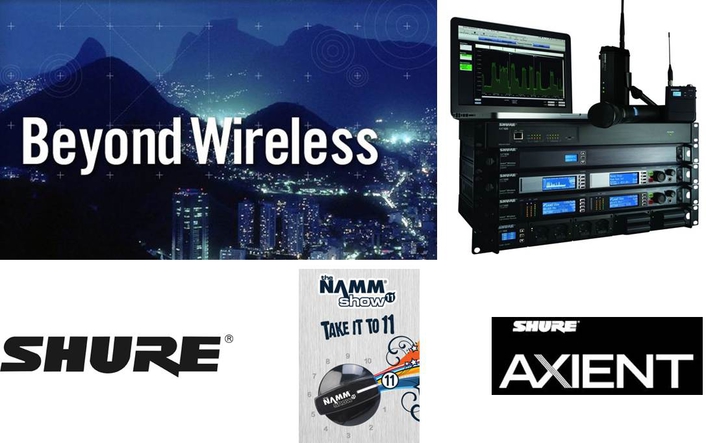 The first wireless system that can detect interference and avoid it automatically
Shure Incorporated previewed its new Axient™ wireless microphone system, which can automatically change frequencies, undetected by the user, to avoid interference, at the 2011 NAMM Show in Anaheim, California.

“Uncertainty and volatility in the RF spectrum are the new reality for professional wireless users,” said Sandy LaMantia, President and CEO of Shure Incorporated. “They face increasing pressure to deliver interference-free performance even though conditions are more unpredictable than ever before. The Axient wireless system was designed from the outset to withstand interference from the analog and digital sources that exist today and may exist in the future.”

The Axient system employs several new innovative technologies that work together to deliver interference-free audio in the most critical live broadcast, theater, music, and corporate events.

“Axient defines a new standard for control and confidence in applications with zero tolerance for failure,” said Erik Vaveris, Category Director for Wireless Products at Shure. “This is the first wireless microphone system that can detect interference and avoid it automatically. Today, when unexpected RF interference arises, an engineer is either stuck with dropouts or they can run a backup mic out to the performer. Axient makes that a thing of the past.”

• Interference Detection and Avoidance, which detects RF interference and enables the system to move to a clear and compatible frequency in milliseconds, making even major interference undetectable.
• Frequency Diversity, which transmits full-bandwidth audio on two separate frequencies to ensure seamless, uninterrupted audio for mission-critical channels, even in the face of direct RF interference.
• ShowLink™ remote control, which enables the user to make real-time remote adjustments from the receiver or a laptop, of transmitter settings like audio gain while the microphone is live. ShowLink remote control extends throughout the transmitter’s RF range.
• The Axient Spectrum Manager, which constantly scans the RF environment, performs frequency compatibility calculations to assign clear frequencies to each wireless transmitter. It also continuously monitors, ranks, and deploys backup frequencies automatically.
• Smart lithium-ion rechargeable battery packs that have zero memory effect, and deliver accurate battery life metering in hours and minutes, time remaining to full charge, and battery health.
• Wireless Workbench® 6, a completely new software interface that enables the Axient user to monitor and control the entire system. Wireless Workbench features a redesigned graphical user interface with enhancements that support advancements in performance and networkability that Axient offers.

“The Spectrum Manager functions as an air traffic controller for the system,” said Vaveris. “When the receiver’s Interference Detection & Avoidance feature senses interference, the Spectrum Manager assigns a new frequency that it knows is clean. The frequency is deployed to the transmitter by the ShowLink wireless access point, and the transmitter and receiver execute a synchronized frequency change in a matter of milliseconds, making it virtually undetectable. And with Frequency Diversity enabled, there is no audible trace whatsoever.”

The Axient Wireless microphone system will be available in mid-2011 with pricing TBD.