The Academy of Motion Picture Arts and Science have announced ten scientific and technical achievement recipients represented by 34 individuals, which include a Scientific and Engineering award to SHOTOVER’s CEO Brad Hurndell, and past employees Vikas Sathaye, John Coyle, & Shane Buckingham for the concept, design, engineering, and implementation of the SHOTOVER K1 camera system. The K1 is a gyro-stabilized aerial gimbal platform that features an open architecture design which allows for the most comprehensive range of camera and lens interchanges.

The academy stated in their announcement: “This innovative 6-axis stabilized aerial camera mount, with its enhanced ability to frame shots while looking straight down enables greater creative freedom while allowing pilots to fly more effectively and safely.”

Brad Hurndell has dedicated the award to the late Alan Purwin, who acquired SHOTOVER Camera Systems in 2012 and led the company to new heights. “He played a crucial role in building SHOTOVER into one of the most successful and widely used brands in the aerial production space. Alan brought with him an unparalleled understanding of the aerial aspects of the motion picture industry, and I am proud to dedicate this award to him. In addition, I would like to extend special thanks to David Nowell, Fred North, Hans Berjno, Dylan Goss, Peter Graf, Brent Dick, David Broadhurst, Tane Coe, and to the entire SHOTOVER team who have helped make the K1 the engineering success it is.”

Since its launch in 2012, the SHOTOVER K1 has been relied upon by production companies and aerial cinematographers across the globe for motion picture, television, and commercial productions. The system has worked on over a hundred different feature films including The Hobbit, Transformers: Age of Extinction, Spectre, Deepwater Horizon, Spider-man: Homecoming, and Dunkirk. 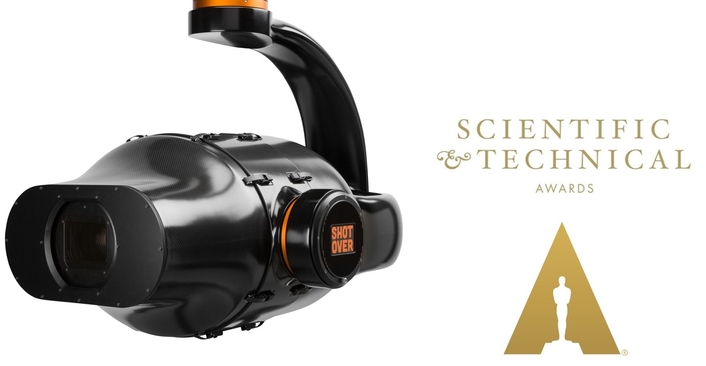 The Scientific and Technical Awards Presentation will take place on Saturday, February 10th, at the Beverly Wilshire in Beverly Hills, California.

SHOTOVER is a developer of high-performance camera systems and UAVs for the motion picture and broadcast industries. The company’s line of gyro-stabilized camera platforms offers aerial cinematographers an unprecedented level of stability, control and versatility in a compact package easily configured for 2D, 3D and Ultra HD shooting with the world’s most advanced cameras and lenses. Developed in partnership with the motion picture industry’s top aerial cinematographers, SHOTOVER systems are fully user upgradeable, allowing operators to utilize new professional cameras, lenses, and accessories as they come to market.