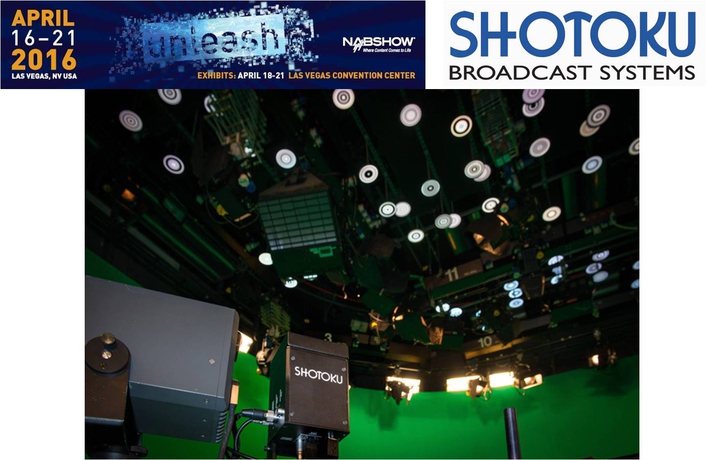 U.S. Broadcasters Get a Look at The Company’s Next Generation VR/AR Tracking System for the First Time at NAB 2016

April 18, 2016 -- Shotoku Broadcast Systems, the well-established leader in manual and robotic camera support, and virtual reality tracking, is introducing the U.S. broadcast market to its latest solution in its range of leading VR/AR tracking systems at this year’s NAB Show.  The company’s new Free-d2, which is being demonstrated at Shotoku’s Booth C8008, represents a new generation of tracking systems that do not require physical encoder devices attached to the camera support’s moving axes.

No concept of a home or reference point exists for Free-d2 — wherever the camera is positioned is immediately known. The tracking data never drifts regardless of the number of moves or hours of operation.
“Shotoku is extremely excited to introduce Free-d2, our newest VR/AR tracking system, to the U.S. broadcast market at this year’s NAB show,” says James Eddershaw, sales director, Shotoku. “For many years, Shotoku has been providing broadcasters from around the world a range of solutions in VR tracking, from simple 2D Pan & Tilt heads to full-sized 3D systems based on pedestals, cranes and jibs. These systems provide precise, reliable, and easy-to-use hardware-based VR tracking data.

Free-d2, originally developed by engineers at BBC Research and Development, extends our range of VR solutions, but differs in concept to encoder-based hardware tracking.”
The system’s small Free-d2 camera is attached to the broadcast camera in such a way that it does not interfere with normal operations, and constantly views the lighting grid area where markers are positioned.  Being attached directly means that any type of camera support can be used, including Steadicam or even handhelds.

The low-cost markers are made of simple reflective material and can be placed anywhere within the studio lighting grid or ceiling area.  Once an initial studio map is created, the system will typically never require calibration again. In use, the Free-d2 camera only needs to see a small number of markers to calculate the position of the camera, so obstructions such as lights or any other ceiling equipment fittings are no hindrance to operation.

About Shotoku Broadcast Systems
Shotoku Broadcast Systems is an international leader in the manufacture and marketing of a full range of camera support products with emphasis on manual and robotic pedestals and pan/tilt heads for the television broadcast industry. The Company also provides robotic camera systems capable of interfacing with third-party equipment. Established as an engineering design firm specializing in advanced mechanics and electronic control systems, Shotoku maintains headquarters in Japan with offices in the UK, China and the USA.   The Company's robotic camera systems are designed, developed and manufactured in Sunbury, UK.