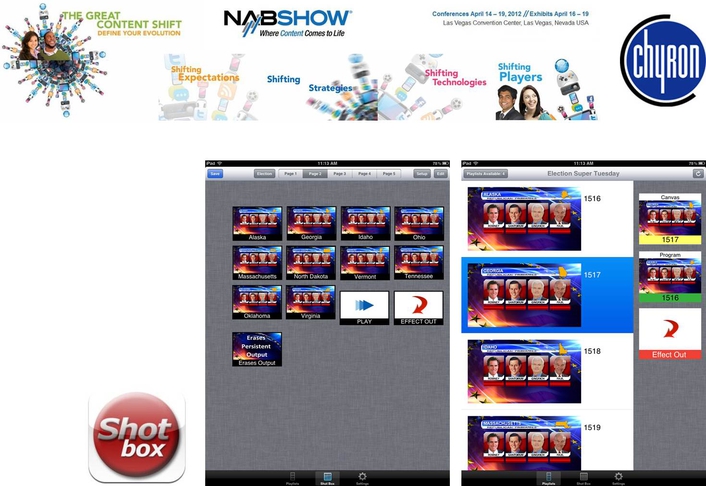 Free App, Available on iTunes®, Provides Another Easy Way for Chyron Users to Take Live Graphics to Air
Chyron today announced the release of Shotbox for Lyric, a free app on the iTunes® store that enables iPad® users to control scenes within the company's Lyric® graphics creation and playout software. By eliminating the need for macros or a keyboard, Shotbox for Lyric provides another simple way to control live on-air graphics in applications ranging from news and sports broadcasts to worship services.

"In addition to enabling easy live graphics playout from an iPad interface, Shotbox for Lyric allows users to demonstrate a higher degree of technical savvy and control," said Phil Carmichael, vice president of product marketing at Chyron. "Because the interface is extremely intuitive, requiring little or no user training, it can be operated just as easily by news anchors as by volunteers in a house of worship."

Shotbox for Lyric displays icons associated with specific Lyric messages, and during a live event, the iPad user can simply click on the appropriate icon to trigger playout. The free portion of the app wirelessly controls a Chyron graphics system in the newsroom to take graphics to air instantly.

An additional add-on is available for purchase from Chyron, which provides enhanced functionality. Users are able to recall Lyric playlists and randomly play scenes including scene transitions to air.

Demonstrations will be shown at the upcoming 2012 NAB Show in Las Vegas.

About Chyron
Chyron is a leading provider of Graphics as a Service for on-air and digital video applications including newsrooms, studios, sports broadcasting facilities, and corporate video environments. An Emmy® Award-winning company whose products have defined the world of digital and broadcast graphics, Chyron's graphics solutions include the Axis World Graphics online content creation software and order management system, on-air graphics systems, clip servers, channel branding, and graphics asset management solutions, all of which may be incorporated into the company's BlueNet™ end-to-end graphics workflow.