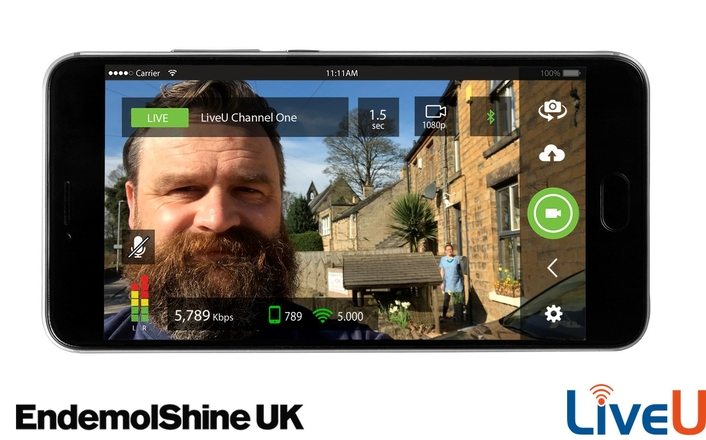 Shine TV, part of the Endemol Shine Group, has created an innovative documentary about these difficult times using LiveU’s LU-Smart mobile app to do so, fully adhering to current COVID-19 lockdown rules in the UK. Called A Very British Lockdown: Diaries from the Frontline, which aired on April 21st on ITV, one of the UK’s main terrestrial channels, it follows NHS staff, nursing home workers as well as members of the public to reflect the reality of current lives.

Executive Producer Tom Hutchings at Shine TV, says, “A lot of productions have been put on hold, for obvious reasons. Networks are now faced with finding content to fill their schedules. Production companies are trying their best not to shut up shop, adjusting to new ways of working to make compelling TV in the current climate while adhering to government restrictions. This is what we have done with this documentary, creating TV simply with LiveU technology that provides a real cross section of what’s happening. It means we can stay safe and ensure we capture great content. Everything in the film – with the exception of GVs (general views) – was shot through the app.”

Drawing on their experience in making technically challenging productions such as Celebrity Hunted and The Heist, which utilised LiveU’s technology, Shine TV began to develop a workflow to allow remote filming by members of the public while maintaining editorial quality.

Having reached out for possible participants, Shine TV ensured each one downloaded LiveU’s LU-Smart app to their smartphone. That meant no crew onsite – or physical contact at all with participants – with footage then uploaded to Shine TV servers and edited from home by Shine TV’s editors. Using LiveU Central to manage and monitor what was being shot in real-time, additional instruction updates were communicated to participants as and when required.

Shine TV was able to adhere to all lockdown rules while creating quality content that still had the desired feeling of being raw and real. Although this documentary is about the UK experience, Shine also received footage from other countries, including India and South Africa.

Tom Williams, Executive Producer of the documentary, says, "Lockdown is the most extraordinary time in recent British history, and we were desperate to tell ordinary people's stories of hope, fear and resilience in the fight back against the pandemic. But how can you film unfolding dramas without ever actually meeting the people involved? By teaching our contributors remotely to use an app on their smartphones we cracked it! A Very British Lockdown is a really intimate picture of the first month of lockdown told by Britain's families, shopkeepers, key workers and those most vulnerable to Coronavirus. This new way of filming has taken us behind closed doors into some totally different worlds. We've ended up making a really candid, unfiltered film in a way that we simply wouldn't have thought possible, and certainly wouldn't have tried, before lockdown."

Paul Shepherd, Regional Sales Director with LiveU, said, “Once again, Shine TV has taken LiveU’s mobile bonding technology and run with it, this time to deliver a documentary of real power, created in a way that adheres to all lockdown requirements. This is a real achievement. It’s exciting to see it aired on ITV and, of course, on its catchup service ITV Player too.”

LiveU technology was provided by its UK partner Garland Partners.

About Shine TV
Shine TV is one of the UK’s leading producers of popular factual television making a diverse range of shows from one off documentaries to long running series.
Well known for producing innovative formats such as Hunted (Channel 4), The Island with Bear Grylls (Channel 4) and The Heist (Sky One), Shine TV prides itself on making surprising, challenging and entertaining shows. Blending cutting edge technology and filming techniques with the highest production values, Shine TV’s formats are multi award winning and produced around the world.
The company is the producer of MasterChef (BBC One), Celebrity MasterChef (BBC One) and MasterChef: The Professionals (BBC Two). MasterChef continues to be the BBC’s highest rating cooking show and the world’s most successful cookery format having been locally adapted in 52 countries.
Shine TV (formerly Shine Limited) was founded in 2001 by Elisabeth Murdoch and became part of the Endemol Shine Group in 2015.

About LiveU
LiveU is driving the live video revolution, providing live video streaming for TV, mobile, online and social media. Let your audience become part of your story with high-quality and flawless live video, transmitted from anywhere in the world, through the use of our patented bonding
and video transport technology. LiveU creates a consistent bandwidth and a reliable connection so you can acquire, manage and distribute high quality remote live broadcasts over IP. Our broad portfolio of products sets the industry standard for live video production. From backpacks to smartphones, and satellite/cellular hybrid to external antenna solutions, LiveU offers a complete range of devices for live video coverage anytime, anywhere. In addition, LiveU offers extensive cloud-based management and video distribution solutions. With over 3,000 customers in 100+ countries, LiveU’s technology is the solution of choice for global broadcasters, online media, news agencies and social media.

15,000 Hours of Flawless Transmission Delivered by LiveU
AT&T and LiveU Team Up on 5G for Live News and Sports Broadcasts
BT Sport Selects LiveU for its First Cellular Newsgathering Fleet