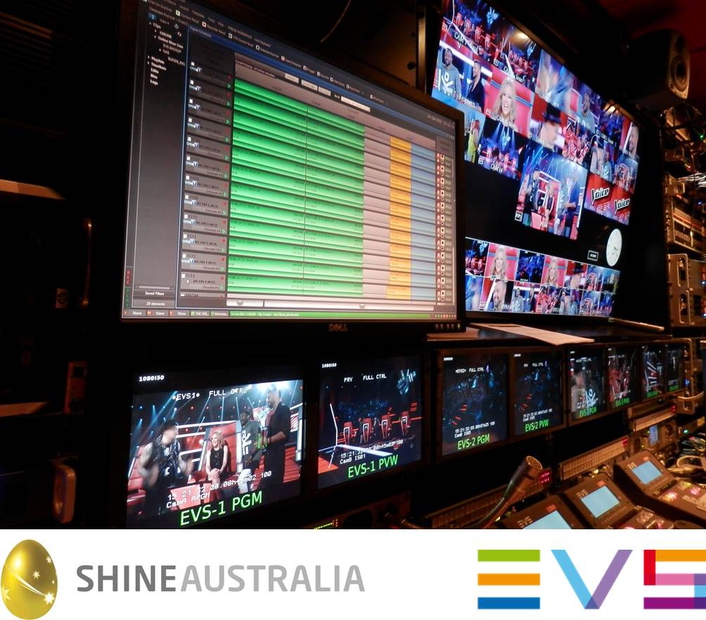 New XDCAM capability of EVS’ XT3 server makes high-definition studio production practical and cost effective
Shine Australia, one of the world’s fastest-growing and most successful creators and producers of media and entertainment brands, has implemented a new high-definition studio production workflow powered by EVS solutions. The updated workflow was selected for production of top-rated live programming such as The Voice, MasterChef, The Biggest Loser, So You Think You Can Dance and Australia’s Next Top Model.

Working alongside Global Television for outside broadcast, Shine procured an EVS workflow consisting of multiple XT3 advanced live production servers and an IPDirector production asset management suite with Xsquare transfer and media workflow orchestration software for the current season of The Voice. Live studio programming such as The Voice requires massive amounts of content, with more than a dozen cameras capturing numerous angles. The new EVS workflow keeps data rates down, simplifies the production workflow, and provides streaming capabilities that save storage resources. 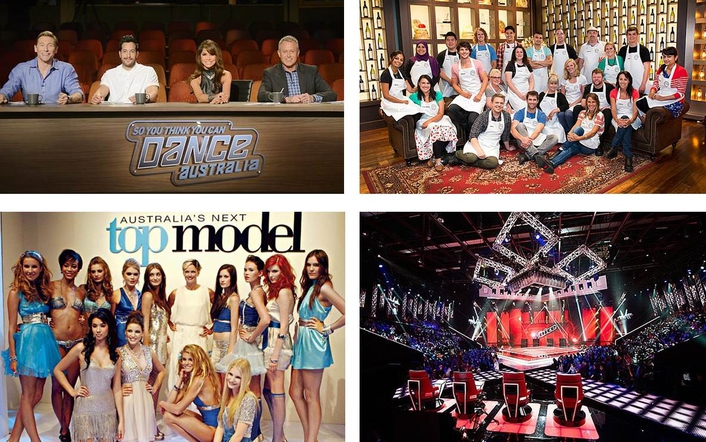 The Voice, MasterChef, So You Think You Can Dance and Australia’s Next Top Model

According to Nick Parker, Technical Services Manager at Shine Australia, HD studio production was a long-time desire that, until now, never made practical sense as it requires nearly three times the data rate, storage and bandwidth of standard definition production. “Traditionally a studio show requires lots of disk space due to limited codec choices and workflow limitations. We’ve always wanted to do long-form studio shows in HD, however, the numbers have never worked in our favour. We were only ever able to do them as one-off shows such as a series finale.”

That changed when EVS introduced the new XDCAM capability to its XT3 server. “XDCAM was a format we understood and had already embraced with our ENG camera workflows,” continued Parker. "Working with EVS and Global we were able to setup a parallel test for the finale of Australia's Next Top Model, where we ran one XT3 in XDCamHD and the others in DNxHD®.” With positive real-world test results and no significant issues, Parker and his team had the confidence to move ahead with the new workflow for 2014.

“For The Voice, Shine needed a flexible workflow that could handle the massive volume of data and enable editors to deliver files while still managing the rest of the show,” said Henry Alexander, SVP Entertainment and News, EVS. “With the capabilities of the XT3 server and enhanced management tools, we were able to deliver and lead the way for HD production for other studio programming.”

Added Parker, “EVS is like the Swiss Army knife of outside broadcast. Using EVS for our file delivery into post means we’re working with rock-solid software and hardware, while keeping our costs down by not having to add additional hardware to the truck. I can confidently say we won't be doing another studio show in standard definition. EVS has given us the ability to do The Voice in HD with the same amount of disk space as SD."

About EVS
EVS drives reliable and innovative technology to enable the production of live, enriched video programming.  Its broadcast and media production systems are used by broadcasters, production companies, post-production facilities, film studios, content owners and archive libraries, allowing them to work more efficiently and boost their revenue streams.
In 1994 the EVS Live Slow Motion system revolutionized live broadcasting. Since then, EVS has gone on to develop visionary solutions that address four key markets – Sports, Entertainment, News, and Media – including the XT3 4K advanced live production server, the new XS next generation server, the OpenCube file-based server, the new high-performing ‘news-in-a-box’ solution, XS NewsFlash, and the C-Cast connected content platform, which allows the instant access and distribution of live, customized media packages for producers, partners, and viewers.
In 2014 and beyond, EVS will continue to be a transforming partner to its customers, enabling them to work remotely in a collaborative environment, achieve faster creation and better management of their content and streamline delivery methods across multiple platforms. The focus will be on helping broadcasters and content owners maximize live content and media asset value in more ways than ever before.