The deployment of 144 heads on NIN’s world arena and festival shows, he believed would contribute to a production that was “visually high art minded”. Returning to the stage after a long break the band’s mentor for the last 25 years, Trent Reznor, introduced a new line-up to promote the band’s eighth album, Hesitation Marks.

During production rehearsals at the LA Sports Arena Bennett had worked alongside production manager Chris Fussell, art director Rob Sheridan and conceptual artist Jon Morris, with the intention of “beefing up” the festival production and creating an interactive set, with video walls — adding the SGM strobes to help create “interesting depths”. The design evolved in close collaboration with Reznor himself.

After the successful opening show at the Fuji Rock Festival in Japan, it was left to Paul ‘Arlo’ Guthrie, who has collaborated regularly with Chris Fussell in the past, to tour the show as lighting director through the US and Europe festival dates. The inventory was provided throughout by Upstaging Inc. 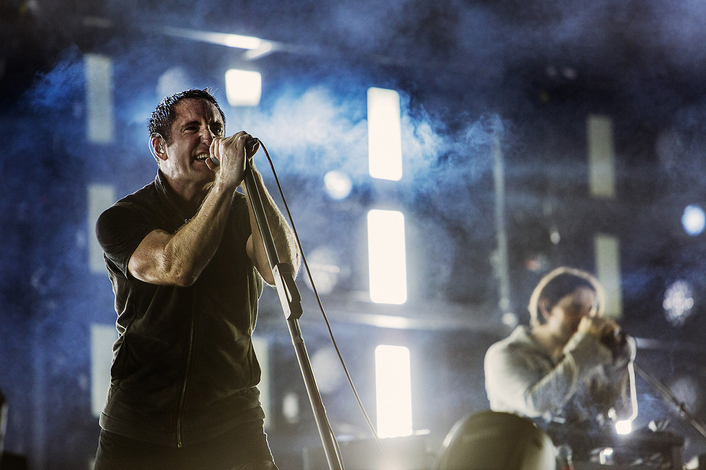 When he first selected the SGM fixtures for use on his shows, LeRoy Bennett had stated, “I was impressed by the combination of power consumption, brightness and rugged design and the fact that each strobe breaks down into three individual cells.”

The design for this production featured eight floor-standing lighting pods, each pod including three rows of six X-5s mounted vertically amongst other discharge and LED fixtures. The six upstage pods stood side by side, making a wall of lights with one single pod each downstage left and right.

“Roy designed the production as a self-contained floor package with some minimum support from a local overhead rig which we put into all the festivals and our own indoor shows,” reported Guthrie. “It was an ambitious idea that brought a visionary show to each stop on the itinerary.”

For his first time out with the X-5’s the experienced lighting director said, “I loved the colour temperature of these strobes and the way the overdriven LEDs emulated xenon strobes.

“They were used in graphic ways, splitting them into the individual cells and turning them right up. They both looked and worked great. I also like the smooth block of light that they produce — not pixelated like most other LED fixtures.”

The same Upstaging rig travelled to all 14 shows around the world. “During that time they were regularly thrown in and out of freight planes. We experienced no technical issues whatsoever — and everything worked fine.”

In conclusion Guthrie said, “The power consumption of these [X-5’s] is a huge advantage and visually they give a new spin on something that is familiar. I am looking forward to using them again on some other shows.”

Meanwhile the band is now back in the States having started their latest leg — the Autumn Tension tour.