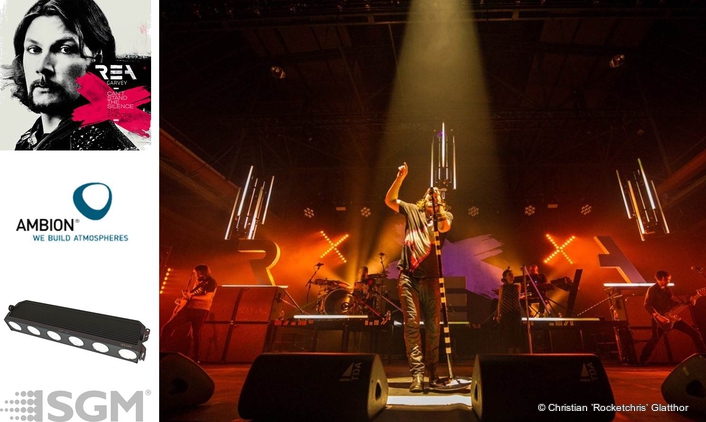 When the former front man of the band Reamonn decided to embark on a major three leg solo tour to promote his new album, he used Aue’s production company, Ambion GmbH to supply the visual element — which included 16 of the SGM Six Packs.

With venues ranging between 3,500-5,000 capacities the set design needed to make a major statement — and it certainly delivered.

Stephan Aue is entirely familiar with the artist’s dynamics, having worked with Reamonn for the past ten years. “When Rea asked me to work on this solo project, I decided to take up the challenge,” he said. “The design has been evolving since the very beginning and this tour contains elements that were present in the very first show.”

While eight of the Six Packs are on stage, handling side lighting for the backing musicians, the remaining eight packs have been used to construct two letter ‘X’s.

The ‘X’ forms part of the artist’s new artwork, and animated by the Six Packs, they are used as Blinders, located on the back truss with a 4ft drop. “This gives the ability to have an intelligent Blinder, capable of mixing literally any colour that I want to use through the special warm/cold colour macros that are implemented,” explains Aue.

“While the side lights are used constantly in each song, the ‘X´s are used selectively, as a special effect.”

This is combined with some special made LED back-lit letters and original modern chandeliers made out of neon tubes, with unique complementary lighting to add further versatility to the chandelier.

As for the SP-6’s, Stephan says, “Firstly, I like the look of the fixture itself because it is not a typical LED design; is more like a classic ‘generic’ fixture, but with all the advantages LED can deliver. Due to the special dimming profile it also behaves entirely differently.”

Sensing the demand for more versatility and less power consumption Ambion have also recently replaced their inventory of strobes with eight of the new SGM X-5 white LED strobes. “The reduced power requirement is the biggest reason for this. The possibility to split one strobe into three segments is a very powerful effect that makes the look unique and enhances the impact of the stage,” he explained. 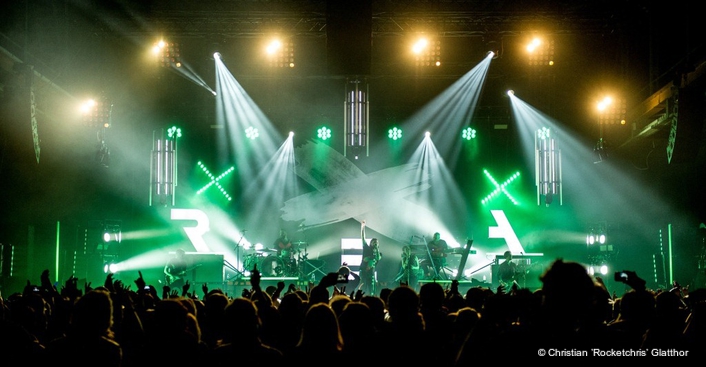 Ambion are constantly seeking new bespoke solutions, and although they supplied all lighting, video and LED for Rea Garvey’s tour, it is the special solutions that they custom engineer for each tour that sets them apart.