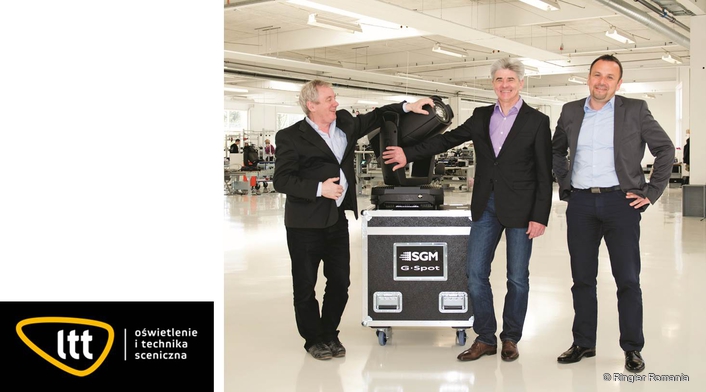 SGM’s Peter Johansen, with LTT’s Jerzy Hołozubiec and Paweł Mroziński
SGM has announced the appointment of LTT Lighting & Theatre Technology (LTT Sp. z o.o., ltt.com.pl) as its new sole Polish distributor. LTT, Poland’s leading, and longest serving distributor of professional lighting fixtures, consoles and other technology, say they are excited to be offering products from what they describe as “one of the world’s most promising LED fixture manufacturers”.

The relationship between LTT and SGM’s CEO Peter Johansen, in fact dates back to 1997, and the latter states, “I have always enjoyed a fruitful relationship with the company and I look forward to working with them once again in this new era.”

LTT say that the main attraction to them has been the speed of SGM’s evolution. “To stay relevant in the market requires the ability to anticipate future developments in technology and customer needs,” says LTT commercial director, Paweł Mroziński. “It has become clear that the foreseeable future belongs to LED fixtures with their reliability, efficiency and excellent colour mixing. That’s why we were searching for a partner that offered the most innovative solutions in this technology — and in our opinion SGM A/S is precisely that company.”

LTT’s strategy on the Polish market has always been to promote not only leading brands, but also companies that show exceptional potential to become market leaders. “Our new partnership with SGM continues this strategy,” Mr. Mroziński continues. “We are impressed with SGM’s distinct focus on LED technology, and we believe that the company has all the right prerequisites to become the global leader in LED stage and architectural lighting.”

“SGM’s current product portfolio boasts excellent design and solid quality, with innovative features such as IP65 water resistance. We are confident that under Peter Johansen’s leadership, the company will be able to react quickly to new challenges and adapt to customers’ changing needs, without the inertia typical of oversized corporations.”

Finally, he says, LTT is excited to once again be bringing the ‘Made in Denmark’ quality and design to Polish customers.”

About LTT
LTT, Poland’s leader in stage technology and lighting, was founded in 1992 as a response to theatres’ increasing demand for high-quality, modern lighting fixtures following Poland’s transformation from communism to capitalism. The company successfully filled the market gap, offering a professional service and a friendly and elastic approach. LTT established strong business relations with many of Poland’s leading theatres and cultural institutions, which last to the present day. LTT’s initial focus was strictly on theatre lighting fixtures, but gradually expanded to TV, clubs, stage and rental; the company broadened their business to include complete lighting and control installations as well as complex stage technology implementation in new or modernized buildings. LTT implemented and coordinated full stage technology in venues such as the Krakow Opera, Wroclaw Opera, CAPITOL Musical Theatre in Wroclaw, the nearly completed NOSPR Concert Hall in Katowice and countless others. LTT also offers multimedia solutions and cooperates with market leaders in stage machinery, acoustics and sound, while also providing training for stage lighting professionals.

About SGM
SGM Technology for Lighting was taken over by a consortium led by well known Danish entrepreneur Peter Johansen in February 2012. His mission was to manufacture a dedicated portfolio of LED lighting and custom engineered solutions for the concert touring, entertainment, architectural, commercial and industrial sectors and today this includes 3D domes, light strings and LED light tubes to high powered architectural wash lights and coloured and white strobes. The newly formed SGM A/S soon consolidated all manufacturing in Aarhus and equally wasted no time in picking up its first top industry Innovation award for G-Spot — in recognition of the world’s first IP65-rated LED moving head. Since then, SGM LED products have appeared in large numbers at festivals and on world tours by artistes including Beyoncé and Taylor Swift, and featured heavily on high profile spectaculars such as the 2013 and 2014 Eurovision Song Contest. In installation SGM has a portfolio of users ranging from The Playboy Club London to the spectacular Cristo Luz in Brazil.