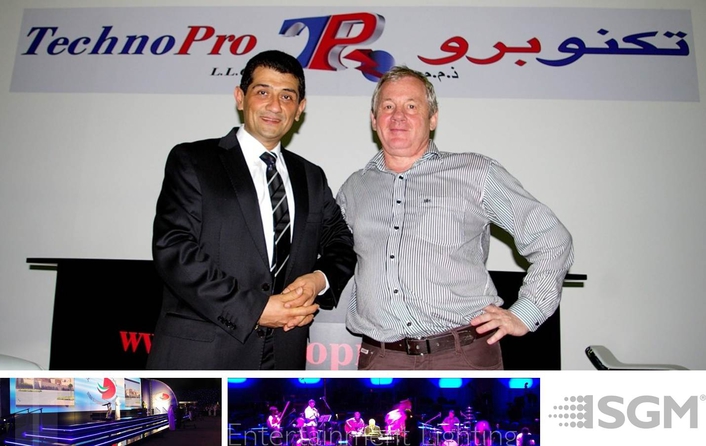 New deal will see representation for the resurgent lighting company extend far beyond the Middle East
SGM Lighting and Middle East-based giants, TechnoPro, have agreed a new distribution deal that takes the relationship which the two companies have enjoyed for many years to a new level. Nabil Bourgeili (left) and Peter Johansen celebrate the new distribution arrangement at PALME Middle East in Dubai.

SGM CEO Peter Johansen and TechnoPro founder and chief executive Nabil Bourgeili confirmed an agreement to extend the brand’s territorial representation far beyond the UAE, during the PALME Middle East show in Dubai this month.

Under the new ownership of Danish entrepreneur Johansen, the former Italian lighting company is now focusing exclusively on LED fixtures. In fact the launch of next generation LED effects into the Middle East market formed a dynamic component of TechnoPro’s massive 1000 sq metre display at PALME — making them easily the largest single exhibitor at the show.

Said Peter Johansen, “We are delighted to be partnering again with Nabil, as TechnoPro looks to move further into LED technology and the architectural market. We recognise that Dubai is a vital hub for reaching not only the Middle East but beyond, and with bases in Dubai and Qatar, TechnoPro is without doubt the predominant player in the region.”

Nabil Bourgeili responded, “We have enjoyed a successful relationship with SGM for a number of years but this will bring us much closer to the brand.  We will provide fully-supported distribution in Central Asia and the Near East, including Turkey, Kazakhstan and parts of the old USSR, as well as North and Central Africa. As the largest production company in the Middle East we are well qualified to do this.”

He continued, “What excites us about SGM’s new portfolio is that some of these products are completely unique, which will find application not only in the entertainment market but in the architectural world, including daily activity environments such as shopping malls and attraction parks. I have a lot of respect for the direction SGM is now taking with its products, and am very excited by the potential that this offers.”

About TechnoPro
Established in 2001, TechnoPro today celebrates  10 years of successful Turn Key solutions, both in Technical Productions and Show design in the World of Events. Based in Dubai, UAE with a branch in Doha ,Qatar , TechnoPro is supplying the Middle East region  with  professional  equipment from LED Screens,  Intelligent Lighting, Audio,  Video,  Lasers,      Special Effects, Power Distribution , Truss Structure & Rigging Accessories, state of the art  products made available for rental and sales.

10 years of proven record in professional execution and technical production of hundreds of sports events, festivals, award ceremonies, concerts, , conferences, exhibitions, corporate , property and product launches, high profile weddings and State of the Art architectural light installations across the Middle East Region. With more than 80 dedicated staff members of creative directors, project managers, and a pool of skilled and professionally trained engineers to support its growing number of clients and installations.

Backed-up with 25 exclusive agencies and manufacturers , 12000 m² of professional equipment  loaded stock , In-House Design and Graphic Department, dedicated Workshop for maintenance and    technical support, TechnoPro will always be a long term partner and support for excellence and success  in today and your future Events.

About SGM Lighting
SGM Lighting has come under independent ownership again, with a consortium led by Peter Johansen acquiring the company’s assets and IP from the RCF Group. The new company, SGM A/S, is headquartered near Aarhus, Denmark, and brings together an experienced R&D resource committed to developing entirely innovative LED solutions in the entertainment and architectural lighting sectors.

Having originally founded Martin Professional, Peter Johansen is back in charge of his own operation again — working with many of the same designers, sales force and distribution partners who underpinned his success back in the 1990’s. In the new set-up, R&D, admin and after-sales will be based in Denmark, with manufacturing plants in Italy, Thailand and China, and warehousing in Holland.

States Peter, “Having had the opportunity to take over a consolidated international brand, we remain committed to establishing SGM as one of the absolute leading names within the industry. We aim to be seen as the LED company of the future.”