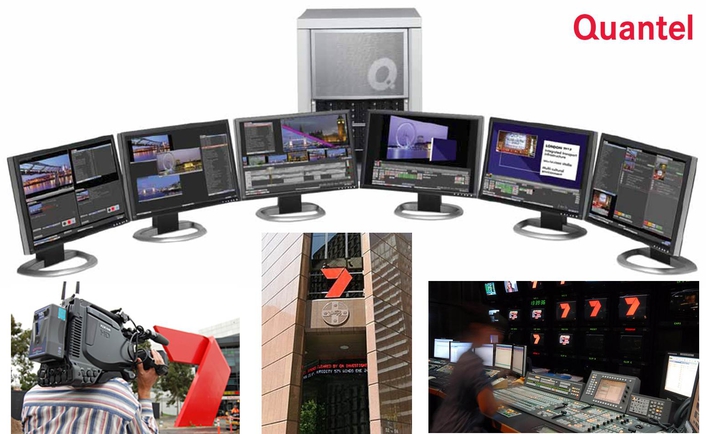 Leading Australian free to air broadcaster chooses Enterprise sQ again for speed to air and ease of use
Australia’s Seven Network, one of the first customers for Quantel’s Enterprise sQ system back in 2004 and now the country’s most watched network, has placed an order with Quantel to upgrade its flagship Sydney news centre to a fully file-based, HD capable operation.

David Bray, Broadcast Operations Manager for Seven Sydney, said, “Our Quantel Enterprise sQ system has served us well over the past seven years, but of course technology and production requirements move on. We looked carefully at all the current offerings on the market before making our decision to go with Quantel again. From that research it was clear that Enterprise sQ offers the shortest time to air at HD, a compact physical footprint, has great file handling and still sets the benchmark for ease of use, which is very important for our production team, journalists and editors. Also the fact that it can handle SD and HD material simultaneously enables us to work in either format as required.”

Seven has added more storage and two further sQ Edit applications as well as integrating its Final Cut Pro editors into the Quantel workflow. In addition, Seven has purchased eight of Quantel’s new Qube craft editors, which offer up to 4x faster HD performance than their predecessor (sQ Edit Plus). As well as offering full file handling and workflow, the new system will also integrate with an XDCAM Archive via a Quantel Power Portal.

Quantel Sales and Marketing Director, Martin Mulligan, said, “Seven showed great faith in Quantel when they became one of the pioneering early adopters of sQ technology back in 2004. It’s always really gratifying when customers return to us some years down the road and we are delighted to be partnering with them once again as they transition to HD and enhance their file-based workflows.”

Seven Network (commonly known as Channel Seven or simply Seven) is an Australian commercial television network owned by Seven West Media Limited. It dates back to 4 November 1956, when the first stations on the VHF7 frequency were established in Melbourne and Sydney. The Seven Network is one of five main free-to-air networks in Australia. Since 2007, the Seven Network has been the highest rating television network in Australia, ahead of the Nine Network, Network Ten, ABC and SBS. In 2011 the Seven network won all 40 out of 40 weeks of the ratings season for total viewers. Seven is the first to do this since the introduction of the OZtam ratings system in 2001. It is currently the second largest network in the country in terms of population reach.