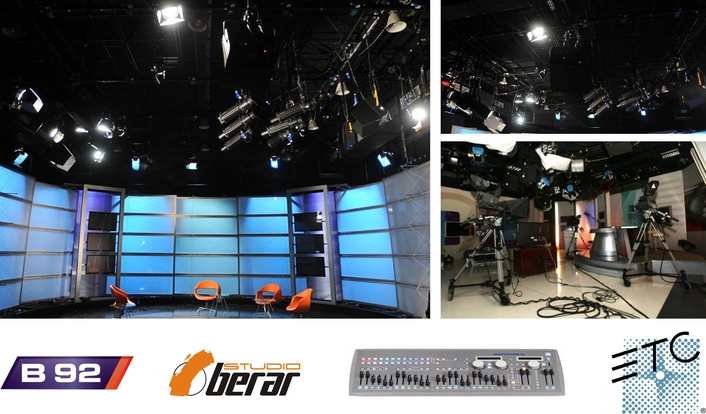 Serbia’s Studio B92 television station has upgraded to ETC, thanks to Studio Berar in Belgrade.
Early last year, technicians from B92 visited ETC dealer Studio Berar’s open day to take a look at what was available; they were offered a demonstration, then lent a range of equipment to try out at their studio. Lazar Josanov, Marketing Manager at Studio Berar, says: “B92 was looking to update and augment their lighting, dimming and control. We delivered 81 channels of SmartPack rack mount units, as they wanted compact, low cost, powerful dimming.

“We recommended a SmartFade and SmartFade ML control desk, because the studio had a limited budget with no need for the extra functionality which comes with Congo or Eos line desks. And they also took delivery of 12 ETC Source Four PARNel and six Source Four Zoom 15-30º beam angle luminaires to complement their existing rig. The equipment will be used across a variety of different shows, but for now, mostly on the weekday quiz show Sve po spisku (All the Others).

“Our team at Studio Berar has an excellent working relationship with ETC, which proved important for B92. They wanted to be sure they have a reliable supplier that would provide full support and service both during and after the warranty period.”

Draško Plavšić, B92’s Director of Photography, adds: “I’ve used ETC Source Four luminaires on various projects in the past, so I knew the studio look would be much improved. By installing new equipment, I finally had a chance to get accessories which I’d not used before, including top hat, half hat and drop-in iris, all of which are very important in TV production.

“I was really impressed with the variable focus PARnel 750W fixtures, which are perfect for background lighting, back lighting and effect light. And ETC’s Source Four PARnels don’t suffer from the problems I’ve seen on other PARs, where gels can overheat or burn. Variable focus and additional wings further enhance my creativity and speed – it’s truly an excellent tool for me as a TV production light designer.

“This is the first time I’ve used a SmartFade control desk, and it's really easy to work with. It’s more than adequate for what I want to do, which is control a relatively small, mostly conventional, rig.”

B92 was founded in 1989 as a youth radio station, broadcasting to Belgrade audiences; it quickly gained a reputation for being highly critical of Slobodan Milošević’s ruling regime. Four separate attempts by the government to silence it – by banning it, seizing equipment or by installing new management – failed, as employees refused to cooperate; instead, they used alternative studios or an internet server in Amsterdam.

In 2000 – the same year as the fall of the Milošević government – B92 expanded its offering with the launch of a television station that aimed to “inform, entertain, educate and inspire viewers throughout Serbia.” As the fastest growing TV outlet in the country, it ranks as third most popular station among its target audience (urban, aged 15-54). It is owned by 11 executives, editors and founders, who are not allowed to sell their shares nor receive dividends.