.
The 1st of June sees Sennheiser UK launch Trade In Trade Up, the latest in its on-going initiative to ensure that all wireless microphone users are operating on legal UK frequencies.

Trade In Trade Up, which runs for three months until the end of August, offers a £100 discount against any new Sennheiser evolution wireless microphone system or IEM for anyone trading in any old, out of date or unwanted wireless system, working or not. 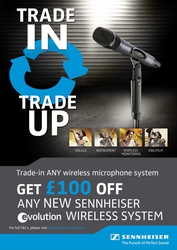 “Since the move from Channel 69 to Channel 38 for general wireless microphone use across the UK, Sennheiser has been working hard to make sure that everyone who uses a wireless microphone, from the biggest tour to the smallest pub band, theatres and concert halls, corporate events and television and radio reporters, has the correct equipment,” says Simon Beesley, Sennheiser UK Product Management. “This is vitally important as Channel 69 is no longer available for use by the PMSE (Programme Making and Special Events) sector. If you are still operating a wireless system in 798-862 MHz, you are breaking the law.

“With this latest initiative, we want to encourage anyone who isn’t aware of the change, or just has old equipment they wish to upgrade, to Trade In Trade Up and make sure they have the best equipment and operate legally.”

Sennheiser Trade in Trade Up