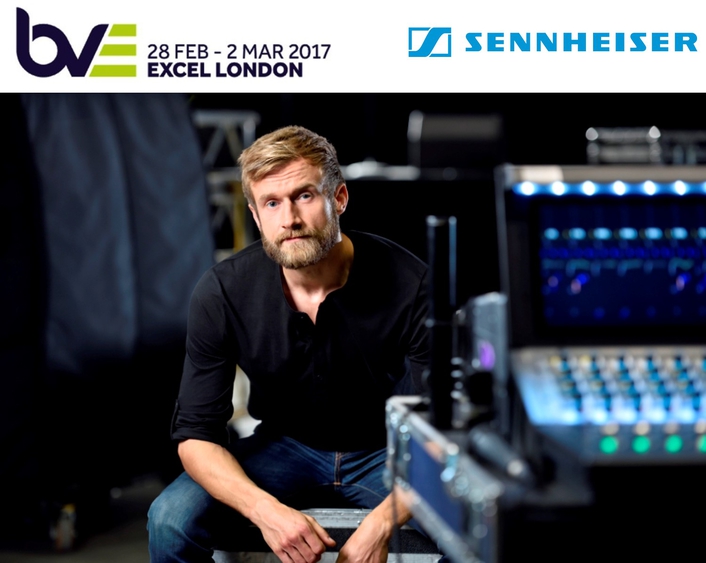 Audio specialist Sennheiser is set to show its latest products, including the newly launched Digital 6000 Series wireless microphone system, on Stand K09 at the BVE Show at ExCeL London, which takes place between 28 February and 2 March. Also on display will be Sennheiser’s AMBEO® VR Mic, EK 6042, MKE 440, AVX and MKE 2 elements microphones, as well as its HME 27 and HMDC 27 broadcast headsets. 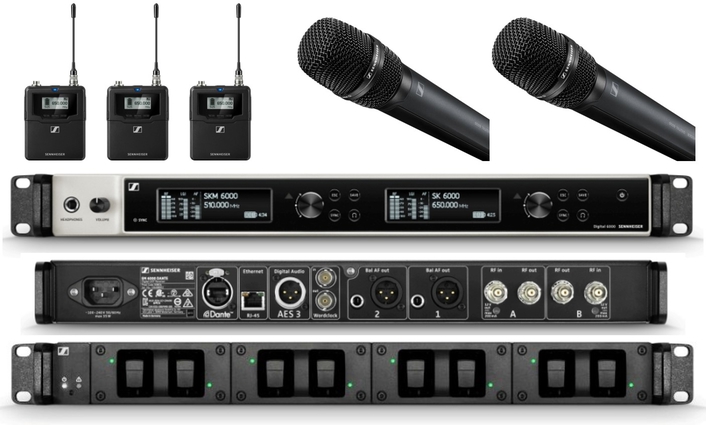 High-quality 3D audio that eliminates the boundaries between playback and reality – this is the promise of the AMBEO VR MIC. Up until now, VR productions had to record immersive audio with quite complicated microphone set-ups. The AMBEO VR Mic, which comes with a software plug-in for post-production of VR content, puts everything into a compact and easy-to-use handheld – making it an ideal tool for any professional VR production.

The AMBEO VR Mic is an ambisonic microphone fitted with four matched KE 14 capsules in a tetrahedral arrangement. This special design allows you to capture the sound that surrounds you from a single point. As a result, you get fully spherical ambisonics sound to match your VR video/spherical 360 content.

For playback, this representation is rendered binaurally, allowing you to virtually rotate the orientation of the perspective in all directions, horizontally and vertically. Ambisonics is also supported by all the major post-production and playback tools on the market today, making it the appropriate tool for Virtual Reality and all other applications involving 3D sound and interactively controlled audio.

The capsules of the VR Mic deliver A-format, a raw 4-channel output that has to be converted into a new set of 4 channels, the Ambisonics B-format. This is done by the specifically designed Sennheiser AMBEO A-B format converter plugin, which is available as a free download for VST, AU and AAX format for your preferred Digital Audio Workstation for both PC and Mac. B-format is a W, X, Y, Z representation of the sound field around the microphone, with W being the sum of all 4 capsules, whereas X, Y and Z are three virtual bi-directional microphone patterns representing front/back, left/right and up/down. Thus, any direction from the microphone can be auditioned by the listener during playback of Ambisonics B.

As well as showing the VR Mic on its stand, Sennheiser will be holding demonstrations in Gallery 4 throughout the Tuesday and Wednesday of the show. Further details and timings are available from the Sennheiser stand.

The EK 6042 configures automatically to every professional Sennheiser transmitter, whether analogue or digital or a mix thereof, identifying transmitter types, companders and frequencies via an IR link – across a bandwidth of a full 184 MHz – in seconds.

The EK 6042 has slot-in technology for 15-pin and 25-pin unislot cameras, backpanel adaptor for other camera types – using hot-swappable battery packs with exact read-out of battery time, USB port for convenient programming via a built-in web server, including imports and exports of entire configurations, as well as a hi-res OLED display, digital and analogue outputs, and auxiliary audio output for splitting the audio signal to other devices.

Setup is easily managed using any browser including imports and exports of the entire configuration via the built-in web server and is SuperSlot™-compatible to work seamlessly with your existing equipment, such as ARRI, Panasonic and Sony, whilst the optional accessories, such as backpanel adapter and battery pack, makes it possible to use the EK 6042 stand alone as well. The automatic configuration makes it possible to set up any microphone in less than 5 seconds.

A new V-shaped design of two shotguns is a fantastic solution for stereo audio captured by camera shoe-mounted microphones, which covers a stereo width equivalent to the image created by common 35mm camera lenses. The spread is very uniform and delivers high speech intelligibility in its focus.

The MKE 440 has two aligned and matched mini shotgun mics ensuring that the MKE 440 captures the audio you want. The stainless steel micro-mesh wind protection reduces wind noise and protects the fine high frequency details in your sound. The MKE 440 provides nicely balanced stereo ambience and amplifies the sound source in front of your camera.

Microphones are susceptible to creating structure-borne noise when being handled, e.g. when the camera they are mounted to is moved. The MKE 440 is fitted with a specially developed patented shockmount. Exactly adjusted to the weight and dimensions of the shotgun microphone tube, it ensures optimal rejection of handling noise.

A very robust and durable stainless steel micro-mesh protects the microphones and provides wind noise suppression. As opposed to regular foam windscreens, the metal mesh will not influence the sound by muffling high-frequency clarity and also serves as a shield against electromagnetic interference.

The integrated battery-powered, high dynamic electronic circuit matches the output signal of the MKE 440 to the camera’s input sensitivity. Thus, handling a dynamic range from the most delicate sounds to screaming-loud rock music. The lowcut filter reduces structure-borne noise and low-frequency wind noise. The MKE 440 offers extra-long operation time of more than 100 hours on a pair of AAA batteries, and even delivers full audio performance on lowbatt operation.

AVX is a digital wireless microphone system for video cameras that ensure totally stress-free audio capture. The amazingly compact AVX receiver plugs directly into the XLR of a camera, where it automatically pairs with the microphone and switches on when the camera does. The system transmits using a specially protected link in the license-free 1.9 GHz range, which means that setting up and recording high-quality audio for video has never been faster or more convenient.

“Whether you’re a journalist compiling a show report, a professional videographer filming a documentary or an in-house marketing specialist making a product video – AVX gives you the room to concentrate on your creative work”, says Sven Boetcher, Portfolio Manager Broadcast & Media at Sennheiser. “No licensing is required, the system automatically selects a suitable transmission frequency and also makes all necessary settings once it has been matched to your camera – that’s true ease of use.”

AVX comes in ready-to-use systems that contains everything required to immediately go live. Alternatively, tailor-made systems can be put together from a wide choice of individual components.

MKE 2 elements is an ultra-tough new microphone designed for high-quality audio capture with GoPro cameras. Designed to be the ideal audio partner to a GoPro HERO4 camera in its ultra-tough housing, Sennheiser’s forthcoming MKE 2 elements microphone helps adventurous users go further – adding fantastic sound quality to their breathtaking footage. The microphone has been created to go anywhere that a GoPro can, easily withstanding adverse conditions such as wind, water, snow and splashes of mud. 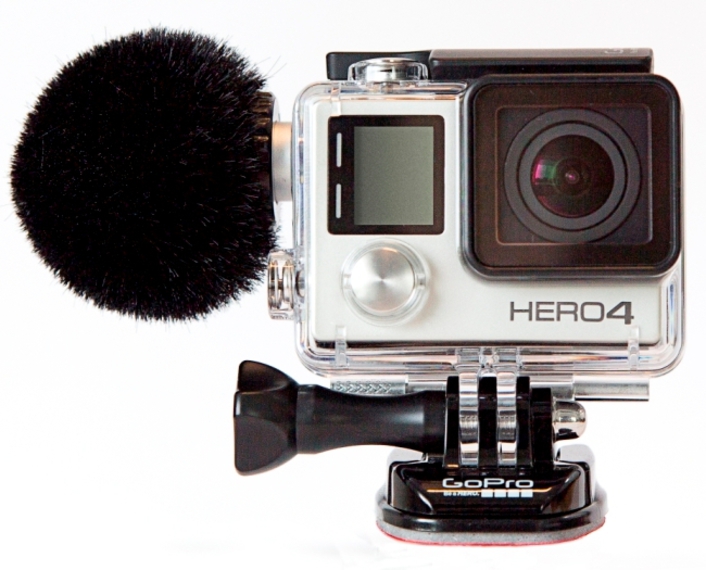 Due to its advanced capsule design, special windshield and watertight connection with the camera housing, the action mic for GoPro HERO4 cameras will even be able to record audio under water. It will allow GoPro users to capture fantastic sound in scenarios where audio recording currently yields poor results – or is not possible at all.

Sennheiser’s new 27 series headsets provide Broadcast Commentators and Audio Engineers with the highest level of wearing comfort. The headphones have a closed and circumaural earcup design to provide a high passive attenuation, but are nevertheless unusually lightweight and comfortable over long working hours. Soft circumaural earpads ensure a comfortable fit. The headset is similar to the 26 series, equipped with the automatically opening two-piece headband, hence there is no pressure on the sensitive fontanelle. For those users who still prefer a conventional headband, a wide headband padding is included that converts the two-piece headband into a compact single piece.

The top-of-the-line model in the 27 series is the HMDC 27, which features NoiseGard™ (active noise reduction) to perform well in very loud environments. By actively reducing the noise level by an additional 15dB this headset increases intelligibility while at the same time protecting the user’s hearing and avoiding stress and fatigue due to noise. NoiseGard™ does not require the usual batteries but is conveniently powered via the microphone power supply from the broadcast desk or intercom system (P48 phantom powered).