Boom operators Dan Lipe and Srdjan Popovic using Sennheiser MKH 8060 on the set of ABC's Modern Family
Now well into its fourth season as a major hit ‘mockumentary’ series on ABC, Modern Family is regularly viewed by millions of viewers across America each Wednesday night. Since the program debuted in 2009, it has picked up an Emmy Award for Outstanding Comedy Series for each year it has been on the air. While the program seems to portray the more hilarious elements of the modern-day family almost effortlessly to its loyal prime time viewership, the production crew regularly overcomes often daunting challenges to ensure the highest quality audio and video is captured. Recently, the team has begun to rely on several Sennheiser MKH 8060 microphones for many of its on-location shoots.

Stephen Tibbo, production sound mixer for 20th Century Fox Television, is responsible for capturing audio on the set for Modern Family — most importantly, capturing clear and pristine dialog among the characters. Since joining Modern Family in 2009, he has captured two Emmy Awards for his outstanding work as sound mixer.

The production set of Modern Family is anything but predictable. Therefore, from a production perspective, Tibbo and his crew need to be ready for just about anything. For example, unlike a controlled studio environment with indoor sets that are more or less acoustically sealed, on-location shoots can present many challenges such as unwanted ambient noise and unexpected interruptions — such as impromptu truck deliveries. During this season, Tibbo recalls that the set of Yard Sale (episode six, in which there is a charity fundraiser for Manny and Luke’s school), was a particularly challenging one:

“This shoot took place at Jay and Gloria’s house, where the entire family is together and they are bringing things to the yard sale,” Tibbo recalls. “We had three days of shooting in front of their home but there were two construction sites literally across the street. There was also a local delivery truck bringing in pallets of drywall and wood – this was intermittently going on all day. ” He says that achieving proper isolation from ambient noise was critical for the success of the shoot: “There was quite a bit of noise going on in the neighborhood, so we brought the Sennheiser MKH 8060s out — I have to say, they really shined and it was amazing.” 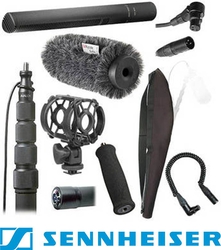 Following a meeting with Sennheiser’s Dave Missall last spring, the MKH 8060s have since earned a permanent spot in Tibbo’s mic pack. “Dave said, ‘Try these, I think you’ll like them,’” Tibbo recalls. “We were interior, and we saw a couple takes where we could put them through their paces to see how they sounded. And they ended up working quite nicely.”

“I now use them on a regular basis, and they come in really handy in high ambient environments — especially outside,” he continues. In Modern Family — as any other high profile, prime time television show — there are simply no ‘second chances’ or ‘retakes’: “We have to shoot every single scene as a one-er,” Tibbo says. “You will have two or three cameras going and you get what you get. I have to pick one microphone for a given scene and make my choice on the spot.” His primary mic choice for Yard Sale, and other episodes requiring isolation from background noise, has typically been the Sennheiser MKH 8060. “These are very versatile microphones, especially for rejection. I usually set them up on a boom, anywhere between 1 to 6 feet away from the actors.”

Tibbo also appreciates the low noisefloor and tight polar pattern of the MKH 8060s: “Sometimes we do these very whispery scenes and I am really cranking it up,” he says. “The MKH 8060 is very quiet, and this is one of the reasons I use it outdoors. With other mics, you may hear a fan on in the distance, but with the MKH 8060 you only hear what you want to hear.” In terms of its sonic character and response, Tibbo says the MKH 8060 is ‘punchy and warm,’ and a predictable performer: “It is a very natural sounding mic, both on or off-axis. On a show like ours where you have actors ad-libbing quite a bit, that is vital.”

In future episodes, Tibbo knows he can rely on the Sennheiser MKH 8060s —especially in noisy locations where multiple mics are required. “This is a great piece for my kit. In the case of the Yard Sale episode on Modern Family, we gave post-production a track they could work with. And in television, that is the name of the game.”