Sennheiser Helps Emeli Sandé Give her Version Of Events 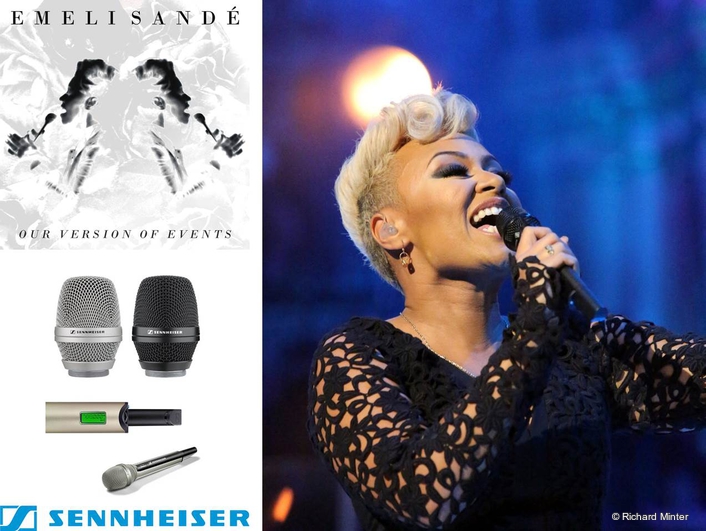 .
Due to the phenomenal success enjoyed by multi-award winning singer/songwriter Emeli Sandé, the consequently high ticket demand meant that her seven date UK tour had to be swiftly doubled in number. Promoting a Special Edition release of her debut album Our Version of Events, Sennheiser equipment is key to Sandé’s performance.

All shows on the tour rapidly sold out, including three nights at London’s Hammersmith Apollo and two homecoming shows at Aberdeen Music Hall. Sennheiser UK has supported Sandé and her band since the 2012 show recorded for the Live At The Royal Albert Hall album and DVD. The current tour features an SKM 5200-II with MD 5235 head for the lead vocal, plus e604s, e904s and an MD 409 featuring on the backline and a package of ew 300 G3 in-ear monitors for all the performers.

Front of House engineer Darren Connor has been working with Sandé for 18 months. A committed Sennheiser user, he has changed her vocal microphone as her popularity has increased and thinks he now has the perfect combination.

“I tried a lot of different mics, both condenser and dynamic. I originally settled on a Neumann KMS 104, which was great with its extended bass response, especially when she was singing off mic,” he says. “As the shows and venues became larger and more ambient I switched to the hypercardioid 105, but I missed the warmth of the 104. I spoke to Phil McDaniel, co-founder of Entertainment Sound Specialists [and currently monitor man for Florence and the Machine], who I used to work for and once we had moved to a radio mic he highly recommended the MD 5235 capsule.

“Sennheiser’s Mark Saunders had demoed the SKM 5200 series when we performed at the Albert Hall and the combination of that with the MD 5235 capsule means I really don't think we will be using anything else again.”

Of course microphones don’t just need to deliver great sound - functionality and reliability are vital and, as a fundamental part of a singer’s delivery, so is appearance.

“Emeli has quite a tricky vocal due to her dynamic range, technique and the variety of styles in her songs,” Darren continues. “One main benefit of the Sennheiser system is that when she sings off of the mic, I still get a fairly full range of frequencies to work with, but don’t get a lot of ambient pickup.

“It is also extremely functional and user friendly. Battery life is very good, the RF performance second to none, the transmitter is ergonomic and good to look at - but it’s also robust and a nice size, especially for a female artist.”

Monitor engineer Laura Davis agrees, saying, “The 5200 is solid and sounds great. We haven't had any issues with dropouts due to handling, which other mics have given us problems with. It’s great for Emeli as it looks feminine and is lightweight.”

Laura is very happy with the G3 IEMs: “Emeli had been using the G3 system for a while when I started working with her. We then bought a further eight systems to use for the band when we started the UK/European tour in 2012,” she says.

“It’s very reliable and the systems are easy to get hold of, even if we are doing a one-off show, meaning that we have consistency. Overall, the Sennheiser equipment has performed really well for us.”

As well as its equipment, Sennheiser UK is renowned for its artist support. Both Darren and Laura are unequivocal in their praise.

“Mark has been so accommodating,” says Darren. “We have really appreciated his patience while we made decisions on what was best for us. He has answered all our questions and it has been great to have him around at some of the soundchecks to talk over the details of the products, giving advice and suggesting suitable options.”

“We have had so much support from Sennheiser and Mark has been awesome,” agrees Laura. “Any issues we have had have been sorted straight away, emails have been answered quickly and it’s always nice when we get support at shows.”

But it is not just the engineers who are happy. The artist herself says, "Live performance is everything to me. Connecting with the audience and having the freedom to express myself makes everything feel right. Sennheiser's 5200 handheld system helps me achieve this. It's slim, light and sonically very clear.”