Singer-songwriter Ed Sheeran’s star continues to rise. His latest UK tour, although not lengthy, was incredibly successful with 400,000 tickets sold over his two weekend appearances at London’s Wembley Stadium and Dublin’s Croke Park. Pretty impressive for one man and a guitar. Supplied by production company Major Tom, Sennheiser’s 2000 series wireless monitors and its flagship Digital 9000 Series microphones were in use throughout, with the latter, according to front-of-house and monitor engineer Chris Marsh, having revolutionized Ed’s sound.

Chris decided to change microphone during Ed’s last US tour, using Digital 9000 for his vocal, loop vocal and guitar. “Digital 9000 Series has changed our lives,” says Chris. “We had been looking at ways of moving Ed’s guitar away from being wired, but we hadn’t found a good enough wireless system for him to lose the cable, which he’d been using since the very beginning. That was until we tried Digital 9000; unlike others we tried, we found it sounded even better than the cable.

“From an audio point of view, his vocal became a lot more prominent and his guitar sounded more natural. On top of that we’ve been doing stadiums, so having something that has such strong RF capability made a real difference. It meant that Ed could be up to 50m away from the receivers and still have rock-solid reception. It’s made a really big difference to the show and to Ed’s ability to move around the stage.”

“Sennheiser has a long-standing relationship with both Chris and Ed,” says Phil Cummings, Relations Manager EMEA for Sennheiser. “When we suggested that Chris try Digital 9000 for Ed, we were confident that it would perform as they wanted it to. We’re delighted that it proved to be the right choice.” 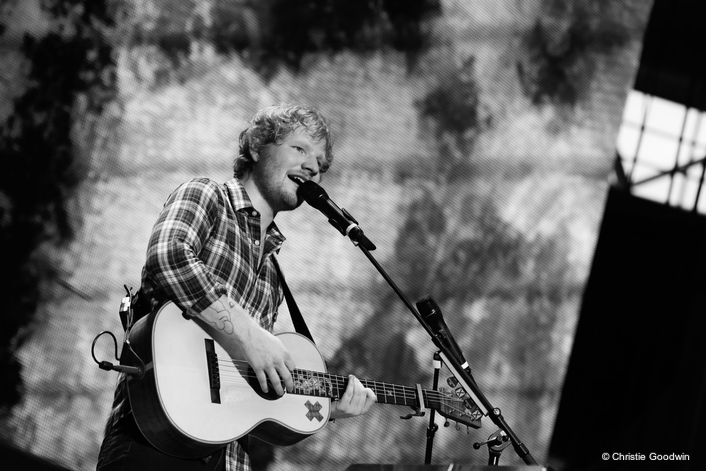 “We use a great combination of equipment, all serviced by Major Tom,” Chris concludes. “We’ve been travelling around the world with it for the past 18 months and it has stood up to everything we’ve thrown at it, performing faultlessly throughout.”

About Sennheiser
Audio specialist Sennheiser is one of the world’s leading manufacturers of headphones, microphones and wireless transmission systems. Based in Wedemark near Hanover, Germany, Sennheiser operates its own production facilities in Germany, Ireland and the USA and is active in more than 50 countries. With 18 sales subsidiaries and long-established trading partners, the company supplies innovative products and cutting-edge audio solutions that are optimally tailored to its customers’ needs. Sennheiser is a family-owned company that was founded in 1945 and which today has 2,700 employees around the world that share a passion for audio technology. Since 2013, Sennheiser has been managed by Daniel Sennheiser and Dr. Andreas Sennheiser, the third generation of the family to run the company. In 2014, the Sennheiser Group had sales totalling €635 million.