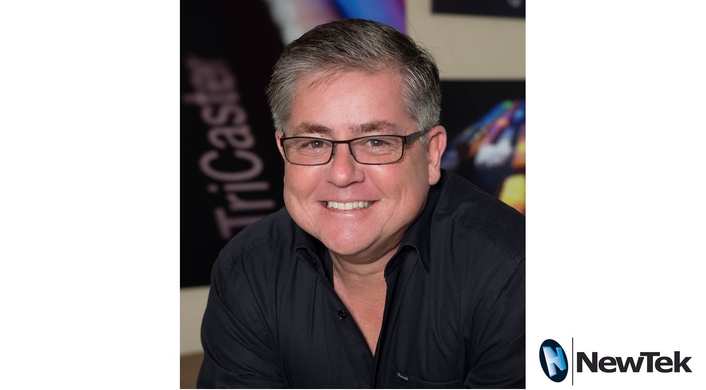 "Our goal at NewTek is to revolutionise the way that people create video. With new products like TalkShow™ and TriCaster Mini we plan on expanding the momentum we already have with live production, streaming and replay,” said Dr. Andrew Cross, NewTek president and CTO. "Scott’s background and experience in the media and professional video industry make him ideally suited to lead NewTek's growth strategy in the year ahead and into the future.”

Prior to joining NewTek, Gentry was founder and CEO of ProVideo Coalition and held a range of executive-level positions in the media industry including DV Magazine, Film & Video, CableWorld, CableFax, and AV Video. He was show director for DV Expo and a founder of StudioDaily.com. His relationship with NewTek started over 25 years ago with the Video Toaster at his automotive-focused production company. He has also worked for ABC Sports, “All My Children,” and the NFL New York Jets and New York Giants.

"Video production, distribution and consumption are increasing at historic rates and NewTek has long been at the center of enabling creative story tellers to do things they didn’t realise they were capable of,” said Gentry. “Whether it’s providing cost-effective alternatives to traditional broadcasters or delivering broadcast-quality capabilities to a new generation of video producers, it’s an exciting time to be joining NewTek and be a part of that great story.”

About NewTek
NewTek is transforming the way people create network-style television content and share it with the world. From sporting events, Web-based talk shows, live entertainment, classrooms, and corporate communications—to virtually any venue where people want to capture and publish live video, we give our customers the power to grow their audiences, brands and businesses, faster than ever before.
Clients include:  New York Giants, NBA Development League, Fox News, BBC, NHL, Nickelodeon, CBS Radio, ESPN Radio, Fox Sports, MTV, TWiT.TV, USA TODAY, Department of Homeland Security (DHS), the National Aeronautics and Space Administration (NASA), and more than 80% of the U.S. Fortune 100.