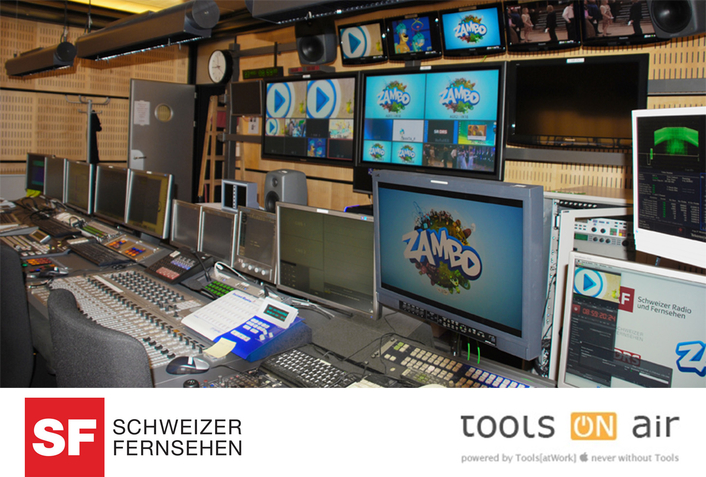 "Zambo" Airs August 30 on SF's TV, Radio and Internet Portals
The directors of Zambo, Swiss TV's newest children's program, are looking toward the future of multimedia, broadcasting the show simultaneously on TV, radio and the Internet.

Under the lead of systems integrators TPC, a new TV studio, capable of broadcasting via all three portals, was constructed at the facilities of Schweizer Fernsehen in Zurich. The facility marks a new direction for the country's public television industry.

"With this new multimedia studio, it was of critical importance for us to create a broadcast facility that could offer all three modes of broadcast simultaneously to meet the needs of our different audiences," explained Christine Spiegel, TPC's project leader. "OpenMedia's StoryBin Module offers the optimal conditions with which to implement this. The directors have the ability to monitor which program has played out on which portal and what is scheduled to play. This enables us to create the most efficient synergies for our programming, saving money and time."

Working with an innovative playout solution, just:play, from Vienna-based ToolsOnAir, a powerful video production workflow was created utilizing Apple's Final Cut Pro. Using OpenMedia, video programming can be viewed on just:play's timeline-based interface, where it can be compiled and scheduled for playout. The completed timeline sequence can then be passed through MOS-protocol to just:play for broadcast.

"The cooperation between ToolsOnAir, ANNOVA and TPC has proven very fruitful," remarked Gilbert Leb, Marketing Director at ToolsOnAir, after the installation's first trial run. "We have also been able to provide proof of concept that Apple-based solutions like Final Cut Pro and Final Cut Server can be easily integrated into a Windows-based broadcast environment."

"The convergence we have created within this project has proven that OpenMedia's innovative, modular design can be a powerful tool in the most demanding multimedia environments," added Michael Schueller, CEO of ANNOVA Systems, GmbH. "With OpenMedia and ToolsOnAir, even relatively small editorial departments can manage the type of demanding workflows normally reserved for larger enterprises."