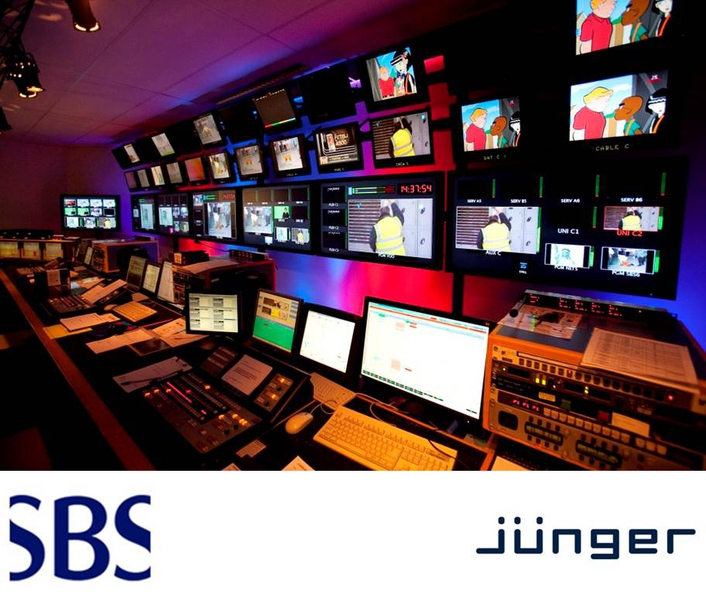 SBS has invested in a Jünger Audio modular C8000 solution
After a thorough process of evaluation that incorporated both measurement and listening test, SBS Broadcasting in The Netherlands has installed Jünger Audio’s LEVEL MAGIC™ solution for loudness processing across all of its television channels.

SBS was prompted to investigate loudness control in order to comply with the new EBU R128 loudness recommendation, which was formally announced by the EBU’s PLOUD Group at the IBC Convention in September, 2010.

Josbert van Rooijen, Manager Broadcast & IT at SBS, says: “Complying with R128 is a complicated, step-by-step process. Proper and clean switched loudness processing is of vital importance if SBS is to be able to combine old style programming with content that is already compliant to the new paradigm. Switching needs to be carried out in a smooth and seamless manner, without changing the overall audio impression. In our opinion, Jünger Audio’s solution complies with this requirement.”

SBS has invested in a Jünger Audio modular C8000 solution that incorporates a suite of DSP and I/O interface cards enabling it to completely integrate workflow for managing surround sound and Dolby coded 5.1 audio signals in production, ingest and playout. These include HD/SDI De-embedding/Embedding with VANC, Dolby E resynchronisation with in-built video delay and Dolby Metadata generation. Because of its modular nature, each C8000 system can be designed to suit the individual needs of each broadcaster. Customers can choose the exact type and amount of input and output interfaces and processing they require for their particular facility.

“Our main reasons for choosing Jünger Audio’s solution were its outstanding performance and amazing ability to control huge loudness jumps, while still preserving the essential natural sounding properties of the audio content without audible colourisation and distortion,” van Rooijen adds. “We also appreciated the clear user interface, the versatility of the system, the GPI programming functions and the variety of configurable options within the C8000 concept.

“The C8086 solution added practical advantages by combining HD-SDI interfacing, Dolby AC-3 encoding, video delay and options to process metadata in a one rack system. It was also very competitively priced. Furthermore, the outstanding support of Jünger Audio’s product manager Inka Danielmeyer was very much appreciated, as was the fast and accurately assistance offered by her colleagues Manfred Ottenbreit and Kai Werner.”

The process of loudness normalisation is an historic breakthrough in television broadcasting and one that requires adaptations to the whole broadcast chain, from production through to consumer equipment in the home. It also sets completely new requirements for processing equipment in the studio.

van Rooijen says that, like many broadcasters, SBS is now in a transitional phase where the processing equipment still has to deal with huge loudness jumps between programmes stored on the play-out server and in the archives.

“It is extremely difficult to design a processor that can handle that well without giving a completely different impression once new material is passed-through the chain in the alternative transparent mode,” he explains. “During the assessment, Jünger Audio made some adaptations to its software base on our test experiences. This changed the assessment into a cooperative process which yielded significant advantages. Jünger Audio was able to act very quickly on our comments and have developed a solution that does the job remarkably well. SBS is already looking forward to a new software version that will be tuned to the next phase of the implementation, and we expect this to be ready when we need it.”

Commenting on the SBS installation, Peter Poers, Managing Director of Jünger Audio, says: “We are very glad that such a highly respected broadcaster as SBS has adopted our levelling solution and that we have been able to work together to incorporate their feedback and modifications. The fact that SBS has chosen LEVEL MAGIC for its playout is testament to the outstanding audio quality of our algorithm. Our next step is to give them R128 complaint audio output control, which is another project that is underlining our leading position in supplying world-class audio control solutions.”

Established in Berlin in 1990, Jünger Audio specialises in the design and manufacture of high-quality digital audio dynamics processors. It has developed a unique range of digital processors that are designed to meet the demands of the professional audio market. All of its products are easy to operate and are developed and manufactured in-house, ensuring that the highest standards are maintained throughout. Its customers include many of the world’s top radio and TV broadcasters, IPTV providers, music recording studios and audio post production facilities.