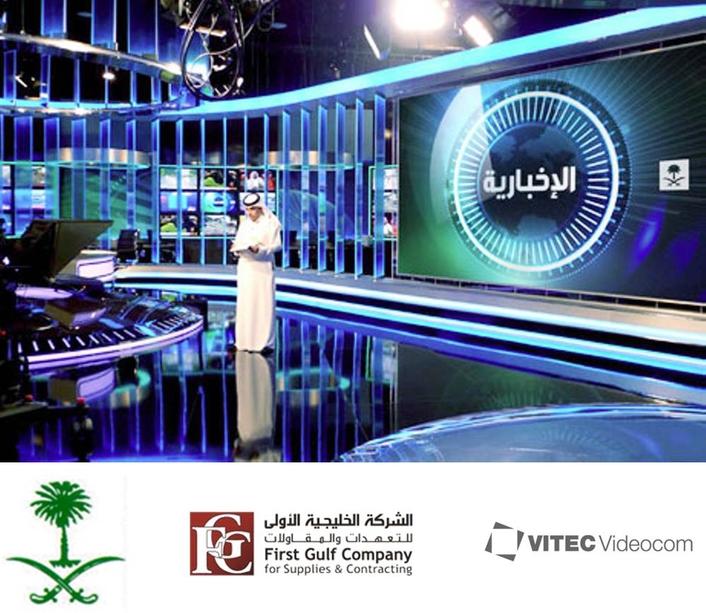 Saudi Arabia's ambitious broadcast plans, overseen by the Saudi MOCI, will transform national TV and radio
Vitec Videocom is supplying a range of its innovative products to equip the state of the art studios of the Ministry of Culture and Information (MOCI) in the Kingdom of Saudi Arabia.

Vitec Videocom brings together the most respected, sought-after and innovative brands in the industry including Anton/Bauer, Autoscript, Litepanels, OConnor, Petrol Bags, Sachtler, Vinten and Vinten Radamec. It encourages multi-brand system sales of these market-leading broadcast, film and pro-video products to simplify the way customers do business worldwide.

The prestigious deal, estimated to be worth more than £4.3 million, is part of a contract awarded to Saudi based broadcast specialists First Gulf Company, to implement the next-generation TV and radio exchange network of the Saudi Arabian government's nationwide media transformation programme.

First Gulf Company is to design, supply and install two of the MOCI’s studios with a full HD broadcast solution and has selected the best in class products from several Vitec Videocom brands to equip the expanded studios. Vitec Videocom acts as an endorsing brand for the market-leading broadcast film and pro-video products from renowned industry names, and this agreement encompasses equipment from Litepanels, Sachtler and Vinten.

The two studios, named Studio B and E, have been upgraded from SD studios to full HD studios and broadcast programmes throughout the whole of Saudi Arabia.

Studio B is currently being equipped with a range of Sachtler’s renowned heads and pedestals. The fluid heads that have been selected include two modular designed Sachtler Video 60 Plus Studio heads and four featherweight Video 25 Plus FB heads. The heads will be supported by six Sachtler versatile Vario Pedestal 2-75. In addition the studio will be installed with LED lighting from the award winning professional lighting pioneer Litepanels, including 15 Litepanels 1X1 Flood LED Daylights with barndoor and 15 Litepanels 1x1 Spot LED Daylight with barndoor.

Ahmad Nana, Regional Sales Manager, Middle East said: “Saudi Arabia’s Ministry of Culture and Information prides itself on choosing the highest quality equipment in its studios, so we are delighted that an extensive range of products from our brands have been selected for such a prestigious project. The deal demonstrates Vitec Videocom’s ability to provide creative and tailored multibrand solutions to the broadcast industry, we are proud to be one support point for all of these market leading brands.”