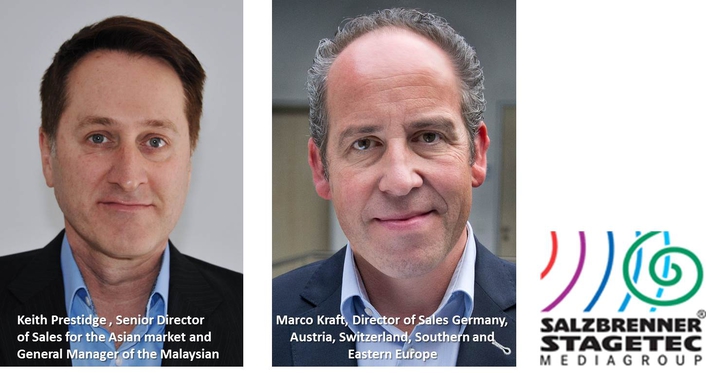 Salzbrenner Stagetec Mediagroup announces the expansion of its distribution team: Keith Prestidge has been appointed as the Mediagroup’s Senior Director of Sales for the Asian market and General Manager of the Malaysian branch office. Furthermore, Marco Kraft joined Salzbrenner Stagetec Vertrieb professioneller Audiotechnik GmbH in September to head the company’s sales activities in Germany, Austria, Switzerland, Southern and Eastern Europe.

Marco Kraft possesses a wealth of experience as sales manager, with ample first-hand knowledge of the broadcast and AV sectors. In 1996, the graduate engineer embarked on a career as sales engineer for JVC Professional’s audio and video products. Between 2000 and 2012, he held various managerial posts and was promoted from direct sales manager to sales director for Central and Eastern Europe. He then joined Dimetis GmbH as sales manager for the company’s network management systems in Germany, Austria and Switzerland.

He is looking forward to his new role at the Salzbrenner Stagetec Mediagroup: “Contributing to the corporate development of a long-standing market leader like the Mediagroup is a fascinating challenge I most gladly accept.” He went on to announce his intention to boost the group’s product business, devise a forward-looking distribution structure and set up customer-oriented competence centres.

Keith Prestidge brings over 20 years of professional-audio and broadcast experience in the Asia Pacific region to the table. During the past four years, he was the Sales Director Asia Pacific at Studer Professional Audio. Before joining Harman, he spent ten years at Klotz Digital AG Asia in a capacity of general manager and earlier as technology director. As of November 2015, he will act as the Mediagroup’s Senior Director of Sales Asia and General Manager of the Malaysian branch office. “I have always admired the Mediagroup’s technological edge, especially with respect to its mixing consoles. And I’m proud to say that the Delec intercom systems are continually pushing boundaries, an impressive example of which can be found at the Sydney Trains stations in Australia. I very much look forward to presenting the Mediagroup’s cutting-edge technology to the widest possible Asian customer base,” Prestidge commented on his career move.