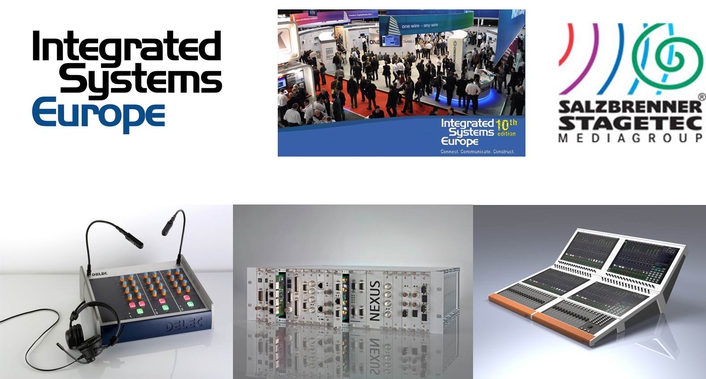 Visit SALZBRENNER STAGETEC MEDIAGROUP at Integrated Systems Europe: Hall 8, Booth N240
For the first time in the company’s history German manufacturer and system integrator for professional audio and communications technology SALZBRENNER STAGETEC MEDIAGROUP will exhibit at 10th Integrated Systems Europe (ISE). The MEDIAGROUP and their branch DELEC can be found at booth N240 at hall 8. The ISE takes place in Amsterdam, the Netherlands from January 29 to 31.

“Over the past decade Integrated Systems has emerged to a market leading show for fixed installations in modern public and business buildings”, says Wolfgang Salzbrenner, one of the MEDIAGROUP’s managing directors. “Thanks to new technologies such as audio-over-IP and to new levels of integration and flexibility, media technology that has formerly been reserved for markets such as broadcast or theatre now diffuses into the segment of fixed installations. As one of Europe’s major manufacturers and system integrators for professional audio and communications technology we have a whole lot to offer for this field of application.”

The SALZBRENNER STAGETEC MEDIAGROUP is a dynamic consortium of three enterprises. Together, in their respective fields of development and manufacture, project engineering and distribution, they are pan-European market leaders in audio, video, and intercom technology. At ISE 2013 the group will showcase some of their most interesting products to the market for integrated systems:

·    POLARIS touch. The world’s first mixing desk with a hybrid control surface of hardware controls and touch screens. POLARIS touch stands for unique flexibility and ease of operation, allowing not only for mixing but also for controlling intercom, light, DAW and much more from one single, integrated device

·    DELEC oratis is a market leading digital intercom and paging system. Thanks to its modular concept it is highly scalable and flexible. Oratis pairs with Dante™ Audinate allowing for signal transmission and networking via standard Ethernet.

·    MEDIA CONTROL is a true multi-purpose controller unit for all kind of applications that perfectly integrates with components by the MEDIAGROUP and third-parties.

·    NEXUS is a market leading digital audio routing and networking system for professional applications. Since its market introduction over one decade ago it has been installed in hundreds of the most prominent venues around the globe.