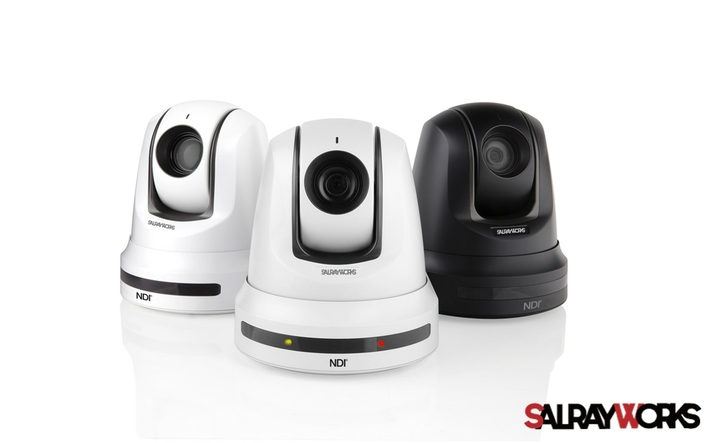 Salrayworks today announced the launch of the Sharon Series PTZ cameras that incorporate NDI® technology. These cameras are using high bandwidth NDI version 4.5 technology implemented on an Intel FPGA through Salrayworks’s own technology. NDI is a high-performance video-over-IP standard that allows anyone to use real time, ultra-low latency video on existing gigabit networks.

Salrayworks has scheduled to launch a series of PTZ models including the Sharon 360 model which can rotate a full 360 degrees in this DEC. It uses Sony's 30x zoom sensor which has excellent AF performance. The inexpensive Sharon 20 model with a 20x zoom manufactured in Korea will be released early in January. Salrayworks is intent on brining the low latency and high-quality video of high bandwidth NDI PTZ cameras for many end users such as sports producers, houses of worship, schools, and conferences.

All Salrayworks products are developed and produced directly in Korea which ensures top quality products. The Sharon 360, Sharon 30, and Sharon 20 will support all NDI, 3G-SDI, HDMI, and CVBS interfaces with full 1080p resolution. In 2021, Salrayworks plans to produce 4K high bandwidth NDI products as well.

Currently, various brands of NDI®|HX cameras have been released on the market, there are not as many high bandwidth NDI cameras. High bandwidth NDI products have the advantage of being visually lossless and having a lower latency. When processing multiple camera sources in an NDI Multiview or NDI switcher, high bandwidth NDI uses much less CPU and GPU cycles in the same environment, so more NDI cameras can be used as video sources in live streaming.

Salrayworks plans to expand its NDI products to include converters, switchers, and multi-viewers.

“We believe that NDI will be able to replace SDI solutions in schools, government offices, churches, businesses, and more that require video conferencing due to the current COVID-19 pandemic,” said Geen Jung, CEO of Salrayworks.

Salrayworks is a start-up founded in 2019, but has already developed video switchers, converters, graphics, uncompressed IP workflows, AR and RF with a team that has been together for the past 20 years.

“Our first experience with IP workflows was with ST2110-based uncompressed video gateways in 2019. However, in reality, cost reduction is not possible through this IP workflow,” David Kim, co-founder of Salrayworks. “NDI is a technology that can replace the existing SDI infrastructure with the easiest, simplest, and most cost-effective IP workflow in the common applications found in the AV market. These include houses of worship, sports, conferences, live events, and schools.”

“Broadcasting is being transformed into IP streaming due to the rapid development of network technology. The advantage of SDI has disappeared. With the widespread use of IP video, broadcasting technology no longer is only accessible to a limited number of players. Our philosophy is to develop smart IP broadcasting equipment that anyone can easily and universally use anywhere in this Internet age.”

The Sharon 360 PTZ camera has focused on an overall circular design that does not point to a specific person or object. The zoom head can be rotated 360° so you can shoot to the rear of the camera. Both the Sharon 360 and Sharon 30 are equipped with the highest specification Sony 30x optical zoom, enabling the closest natural color, accuracy, and fast auto-focus. The Sharon 20 equipped with 20x optical zoom made in Korea is aimed at entering the relatively inexpensive high bandwidth NDI PTZ camera market for schools, small studios, and houses of worship.

The models being released are all 1080p HD and next year, PTZ cameras that combine 4K60 and high bandwidth NDI will be released.

About SALRAYWORKS Inc.
Although a start-up founded in 2019, Salrayworks is experienced at developing broadcasting RF modulation, IPTV gateway, mobile TV and SDI-based switchers, routers, converters, live graphics, AR, and ST2110-based on IP-workflows etc. Salrayworks team members for the past 20 years have developed the first 16-channel 4K switcher for the 2018 Korean Winter Olympics, a world first, and are currently participating as a joint developer in the 4K/30P image sensor project based on AI, led by the Korean government.