Sachtler Support at “The Defenders” 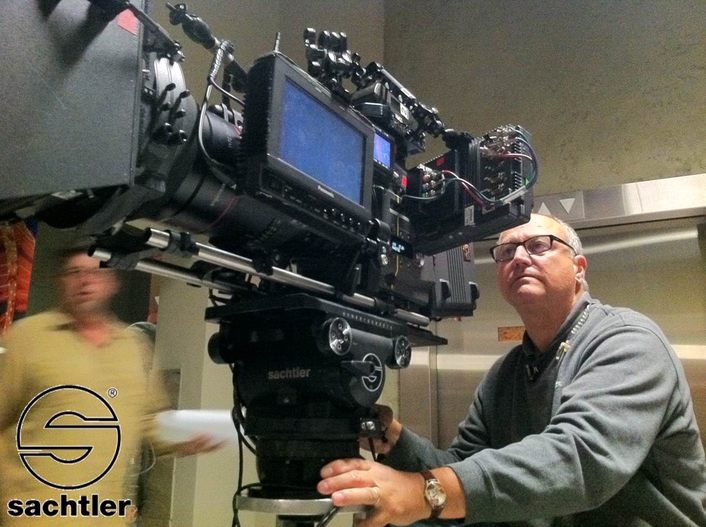 Alan Caso and the Sachtler Cine 75 HD fluid head on the set of “The Defenders”
Sachtler, a Vitec Group brand, announces that cinematographer Alan Caso ASC (Lie to Me, Big Love, Trauma) has chosen the Sachtler Cine 75 HD fluid head as support for “The Defenders”. This new CBS one-hour drama centers around the personal and professional lives of two very different Las Vegas lawyers.

“I’ve been a Sachtler user for over 25 years,” says Caso. “Sachtler is well constructed and provides the best support for our F35 cameras, especially with the additional weight due to the 12-1 zoom, extra power sources and batteries, and the two on-board monitors. One of the added bonuses with a Sachtler is the handy payload shift/boost button switch that allows you to counterbalance both heavy and light camera packages with the same head.”

“The Defenders” is not your staid, courtroom bound legal series. The two lead characters are bigger than life. And, their world is like no other. Las Vegas is definitely another character in this drama. “Adventure and glitz are a big part of what we shoot,” says Caso. “Recently, we had a situation where we were shooting on a rooftop and the camera had to literally face straight downward. With a Sachtler – no problem. It could handle the weight of the camera without undue stress.”

The Sachtler Cine 75 HD fluid head, which itself weighs 26.2 lbs (11.9 kg) has a payload range of 9 to 165 lbs (4 to 75 kg). To optimally balance hefty cine-syle packages with long lenses, it features a sliding plate range of 4.7 inches (120 mm), 24-step counter-balance + boost button, nine horizontal and vertical +0 grades of drag as well as a generous tilt range of +90-/-60 degrees.
The CBS series, The Defenders, starring James Belushi and Jerry O’Connell is shot in Los Angeles, and airs on CBS Wednesdays.

Sachtler, founded in 1958 by cameraman Wendelin Sachtler, is the worldwide market leader for professional camera support systems for cinematography and television production, its name a symbol of top quality and reliability for decades. With an extensive range of camera support systems as well as a finely modulated product line of reportage lighting, Sachtler is the highly qualified partner for cameramen, film and TV studios. Since 2000 Sachtler has been offering the artemis modular camera stabilizer system. With its numerous workshops and training sessions, the Wendelin Sachtler Academy has become a top address worldwide for invaluable know-how and the exchange of information, creating the ideal international platform for creative talents.