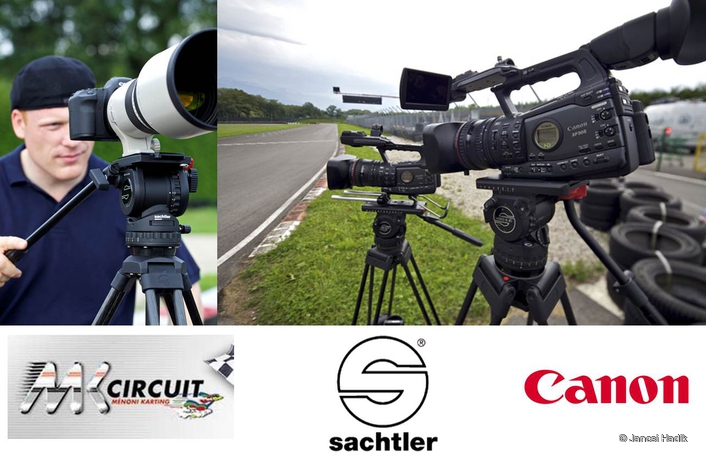 2010 Sachtler Cine DSLR Richard Walch
Fast speedsters and a whole lot of action: The film "The Racetrack" by Canon was recently recorded with the DSLR EOS 5D Mark II and the MPEG-2, Full HD XF305 professional video camcorder at the MK Circuit in Scientrier, France. The film was designed to demonstrate how the output from Full-HD video-enabled DSLR cameras can be combined seamlessly with HD video cameras, with each product offering unique benefits to the film-making process. Canon’s manufacturing ethos is to ensure its products complement one another to ensure a strong workflow solution for users, and superb image quality is always at the forefront of the company’s mind. The final edit demonstrated how the output from both products was seen to work together to create an engaging film showcasing both products’ capabilities. During production, professional equipment from Sachtler, a Vitec Group brand, was also used.

German sports photographer and filmmaker Richard Walch filmed with the Canon EOS 5D Mark II and the new Canon XF305 was put through its paces by cinematographer Bryce Gubler from Switzerland and Dutchman Martijn van Beenen. The production was directed by Dani Kiwi Meier, Director and Executive Producer of Manamedia.

Sachtler provided robust tripods: The new Cine DSLR system for the EOS 5D Mark II, which, with its payload range from 1 to 5 kg and a special DSLR camera plate, is ideal for DSLR cameras with video function. The Canon XF305 was put on a Video 18 S1 system with a 16-step counterbalance. For an unconventional perspective of the track, Richard Walch also decided in favor of the TriSpread baby tripod, a component of the multi-functional SOOM tripod system from Sachtler.

The video "The Racetrack" was shown at IBC and Photokina. During Photokina, Richard Walch and Bryce Gubler also demonstrated the two Canon cameras with the Sachtler tripods on the Canon Seminar Stage and presented the results of their work: The perfect combination of HD recordings from two extremely different cameras.

Sachtler, founded in 1958 by cameraman Wendelin Sachtler, is the worldwide market leader for professional camera support systems for cinematography and television production, its name a symbol of top quality and reliability for decades. With an extensive range of camera support systems as well as a finely modulated product line of reportage lighting, Sachtler is the highly qualified partner for cameramen, film and TV studios. Since 2000 Sachtler has been offering the artemis modular camera stabilizer system. With its numerous workshops and training sessions, the Wendelin Sachtler Academy has become a top address worldwide for invaluable know-how and the exchange of information, creating the ideal international platform for creative talents.

SOOM Flies Above
Robbers and Romance
Where the Wild Animals Live