RZI Lighting Steps Up the Pace with GLP impressions 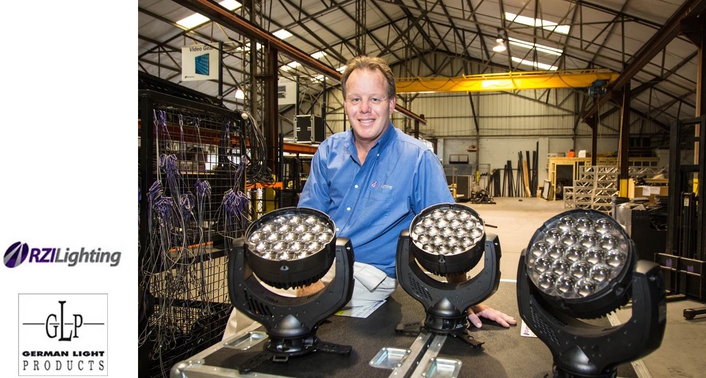 Ray Ziegler with some of RZI’s GLP impression X4’s
New Orleans-based rental and sales company, RZI Lighting, has been intensifying its relationship with GLP Inc during the past year — partly based on the quality and popularity of new age LED heads like the impression X4 and budget-conscious Volkslicht Spot — but also as a result of the support he knows he can rely on from the Californian-based company.

“The new equipment from GLP is really very exciting,” he says. “The X4 has some great features including pixel chases and a fantastic look on stage, the colors are really saturated and the effects are easy to make with a simple console. But it’s best part is that it’s a fixture I can make money on — and that’s what I like most!”

Volkslicht also fit RZI’s business model and offer the same favorable ROI. “We own around 50 now and they just simply work — there are no repairs and very little to maintain. They are small and compact, and as a result we rent them to the masses who love the output for very little expense.”

And GLP has supported the company every step of the way. “It started when Dusty Hudgins and Mark Ravenhill showed up and gave us support for our open house and resale events. Now, when I need parts or support Carl Wake is really easy to get on the phone. They are all good guys and very sharp. It’s nice working with them because they are there at midnight when I call with an issue.”

Ziegler says he could never have imagined running a lighting business on a large piece of real estate that would allow him to hang an entire rig alongside a decent sized prep area. Reflecting on his previous life he says, “I remember returning from a large stadium tour, and my girlfriend at the time said she was going to throw all the stuff out I had stored in her house unless I came off the road.

“I knew I would not last long in New Orleans unless I found something different to do. Since I knew about lights I figured I would buy some and rent them out …”.

And the rest is history. RZI has since developed a wide customer base — “everyone from lighting professionals to guys that want to light up an ice sculpture.”

And GLP keeps feeding that machine, says Ziegler. “The nice thing is that they keep coming out with new products that help us attract new customers. At the same time they are not dropping fixtures that have been around for a while — with quality products you don't need to do that … the good stuff sticks around.”

In particular, they are finding big touring success for the impression X4 in New York / New Jersey and in the north east corridor. “We currently have a dozen X4’s but we are looking to purchase more because they are so popular.”

Summing up, Ray Ziegler says GLP is not simply following the pack, “but leading the way to better gear and better shows. In the end, if you give an LD a more exciting product you are giving them more choices to be an artist … and that’s a good thing as there is so much junk out there right now.”