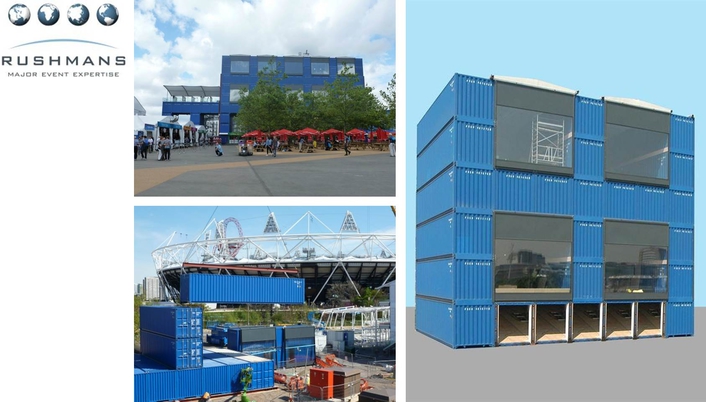 .Rushmans Big Blue formerly known as OBS Tower
Big Blue, the Olympic Broadcast Services tower designed, assembled and commissioned for London 2012, has been saved from the scrap heap and will be available to broadcasters covering events worldwide.

Big Blue was home to rights-holding broadcasters from five continents during the London Olympic Games.  In 2012 configuration it consisted of ten 50m2 by 5m tall broadcast studios 11m above the ground. In addition it provided six covered stand-up positions and 500m2 of concession space on the ground floor during Games Time.

Now Rushmans Broadcast Structures, which provided and managed  facilities for  ESPN, NBC and others during London 2012,  is to ensure a positive broadcast legacy for Big Blue Studios. It has secured rights to provide the facilities in their entirety or groups of individual modules across UK and all international markets.

Discussions with a number of major events organisers are already under way. Nigel Rushman, Founder of Rushmans commented: “Following a successful summer delivering Olympic Studios and positions for a host of broadcasters including NBC, ESPN and the Disney family including, ESPN Brazil, Domestic and International, Star Sports, ABC / Good Morning America – Rushmans are delighted to be involved in securing a Legacy Future for the Big Blue Broadcast Studios”

Andy Clark, Account Director – Rushmans Broadcast Structures added: “Big Blue was designed and manufactured to the highest possible broadcast standards and purpose built for onward use by the broadcast industry. Their modular design ensures flexibility and they can be reused almost in their entirety, shipped easily, quickly and relocated with ease any where in the world where the event broadcast market has a requirement”

For more information on the FLEXIBILITY, SUSTAINABILITY, SPEED and ECONOMY of reusing Big Blue; visit www.rushmans.com

Rushmans deliver the structures, oversee the management of the facilities and enable Broadcasters to concentrate on delivering the best possible broadcasts.