Joachim Hentschel, solution architect at ProSiebenSat.1 Produktion with RTW’s Technical Director, Mike Kahsnitz
RTW, a leading manufacturer and distributor of professional audio metering and control devices for studio recording and radio and TV broadcast applications,  is pleased to announce the recent installation of the company’s TM9 TouchMonitor at ProSiebenSat.1 Produktion GmbH. Based in Unterföhring near Munich, Germany the station is one of nation’s top TV producers. A subsidiary of ProSiebenSat.1 Media AG, the production location will equip its four HD control rooms and eight edit suites with a total of 12 TM9 units to meet the EBU R128 loudness requirements.

Ultra-flexible Metering Systems to be installed in all Four HD Control Rooms and Eight ProTools Edit Suites of the TV Service Provider
ProSiebenSat.1 Produktion provides TV productions and technical services within the ProSiebenSat.1 group. Nearly all ProSieben productions are created here. The production station’s four HD control rooms are used for preproduction and broadcast purposes. Four of the TM9 units are located on script carts in the each of the HD control rooms, three of which are centered around Lawo mc² 66 digital consoles. Similarly, eight TM9 units will be implemented in the ProTools®-based edit suites that are used for post-processing and editing voice recordings and movies (including 5.1 productions). All of the twelve TM9 units have a mixed analog and digital audio-interface configuration.

ProSiebenSat.1, as well as a majority of governmental and commercial TV broadcasters in Europe, are making all changes necessary to comply with the EBU R128 loudness metering standards. To meet the worldwide loudness standards, RTW’s TouchMonitor range was created to help adhere to all major standards including EBU R128, ITU-R BS.1770-2/1771, ATSC A/85 and ARIB. With the latest firmware, TouchMonitors now feature the innovative MagicLRA instrument for an integrated view of loudness and loudness range.

“We have used RTW metering systems for a long time, so it was clear to me very early in the planning stage of this essential project that we would once more rely on that proven technology,” says Joachim Hentschel, solution architect of media-based systems at ProSiebenSat.1 Produktion and the person in charge of converting and reconstructing the studios. “A large number of RTW’s classic peak meters and SurroundMonitor 10800XM are already in use at ProSiebenSat.1 Produktion and we are very thrilled to add the TouchMonitor TM9 to our studio. Since our edit suites also include Tektronix video meters that integrate the RTW-licensed surround sound analyzer, we already know the intuitive surround view designed by RTW and will definitely use the same functionality provided by our new TouchMonitors.” 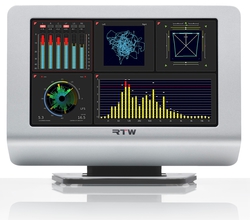 The TM7 and TM9 TouchMonitor versions featuring seven-inch and nine-inch touch-sensitive displays, respectively, provide unparalleled flexibility and modularity, combined with intuitive control. The software visualizes multiple sources simultaneously. It supports displaying the same signal on multiple instruments in parallel, each with dedicated defaults with both horizontal and vertical operation. The system visualizes up to 16 analog and/or digital sources at the same time. The TM9 is even capable of providing a view of up to 32 digital channels when the 3G SDI option is implemented.

“We are very happy that ProSiebenSat.1 Produktion, a long-standing customer, has once again opted for our state-of-the-art products,” says Andreas Tweitmann, managing director for RTW. “We are sure that the TouchMonitor is the perfect tool for meeting today’s and tomorrow’s challenges in audio metering. We’re certain the meters will be the ideal solution to comply with the loudness management with which many European broadcasters will soon be struggling.”

The technical team at ProSiebenSat.1 has also shown interest in the TM3 TouchMonitor, the latest addition to the TouchMonitor range which is a budget-friendly option for workspaces. The compact TM3 will be begin shipping in April, close to the 2012 NAB show in Las Vegas.