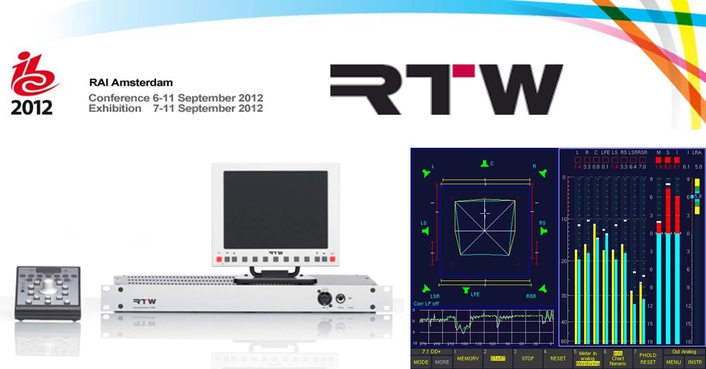 In addition to several minor improvements, the current device firmware now supports the 7.1 DD+ format, ensuring compliance with current 7.1 surround formats for Blu-ray discs and other applications. The 7.1 DD+ format has been implemented alongside the existing 7.1 Cinema format on the SurroundControl and SurroundMonitor systems.

The Surround Sound Analyzer brings the clear and intuitive display method of the original 5.1 format to the enhanced 7.1 arena. Similar to the center channel, the unit displays the newly added side channels using color-coded lines. This way, the user can assess the relationship between the side channels and the phantom sources produced by the lateral-front and rear channels at a glance.

The new software release, featuring a correlation display depicting all possible 7.1 signal combinations, is ideal for professional users working with the 7.1 format. The multicorrelator display has been expanded to read out low-frequency phase errors of all channels versus the LFE, allowing users to make any corrections before phase problems show up acoustically or in bass-management systems.

“Today, the broadcast and media industries face an increasing demand for 7.1 audio due to Blu-ray discs and other current distribution formats,” says Mahmoud Chatah, director of marketing and sales, RTW. “The integration of the 7.1 DD+ format in the SurroundControl 31900/31960 and SurroundMonitor 11900 product lines once again demonstrates RTW's constant commitment to its customers’ evolving needs.”

About RTW
For more than 45 years, Cologne-based RTW has accompanied the steady technological progress in the professional audio industry with innovative instruments and technologies for visual audio monitoring in broadcast, production, post production and quality control. Its state-of-the-art audio and loudness metering systems have an excellent reputation throughout the world. With groundbreaking products such as the Surround Sound Analyzer, the company has been a key vendor of professional broadcast and audio metering equipment for decades.
RTW’s range of products currently includes the SurroundControl series for monitoring, controlling and routing stereo, multichannel and surround audio and the TouchMonitor range, which truly marks a paradigm shift in visual audio monitoring and loudness metering. Combining maximum flexibility and modularity with an intuitive touch-enabled surface and multichannel signal analysis, the TM7 and TM9 units are the essence of many years of experience. The attractively priced TouchMonitor TM3 entry-level system opens new markets, targeting applications such as journalist cubicles, edit suites and small control rooms.