.
On the 18th of May this year Denmark won the Eurovision Song Contest for the third time, all thanks to Emmelie de Forest's impressive performance of the song Only Teardrops, which stormed to victory in Malmö.

More than 170 million viewers across 36 countries tuned into the 58th Eurovision Song Contest in Malmö, Sweden, won by Emmelie de Forest with Only Teardrops bringing the trophy to Denmark. 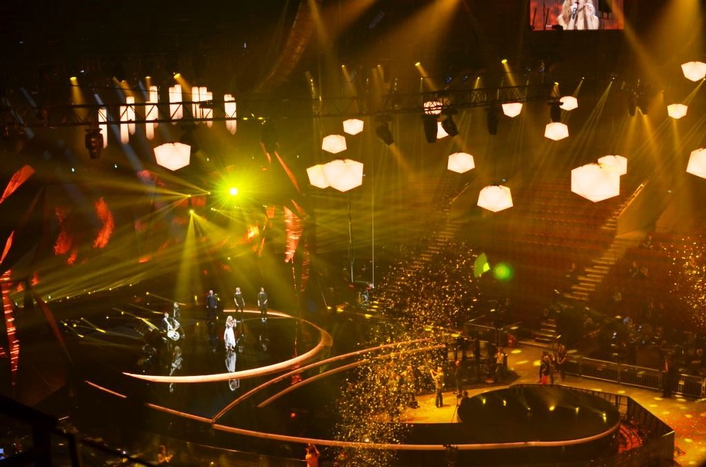 Due to the limited space under the rooftop of the Malmö Arena, the RTS RopeClimber was chosen as the ideal application for impressive camera tracking shots from above. Running on 80 meters of tracks mounted in a hanging position, the RopeClimber slided smoothly through the Arena with an amazing speed of 8 mtrs/s while also moving vertically 2 mtrs/s. RopeClimber was equipped with the Nettmann STAB-C Compact fully stabilized remote head including Broadcast camera. The specialized RopeClimber camera tracking system was developed by RTS Rail&Tracking Systems Winnweiler, Germany.

Since 2004 RTS Rail & Tracking Systems has been meeting the challenge to provide Directors with unique solutions for moving cameras in a variety of creative ways. The developement of advanced remote camera tracking systems is an ongoing part of RTS' mission. RTS is working with professionals from the film and broadcast community to develope new systems or modify existing systems in order to provide unique and creative solutions to their production needs. The RopeClimber was developed in 2011 for the particulat needs of the European Song Contest 2011 in Dusseldorf and was travelling to events worldwide like the MTV Music Awards and the VMAs in the U.S. before it again deliverd stunning images at the ESC 2013 in Malmö.