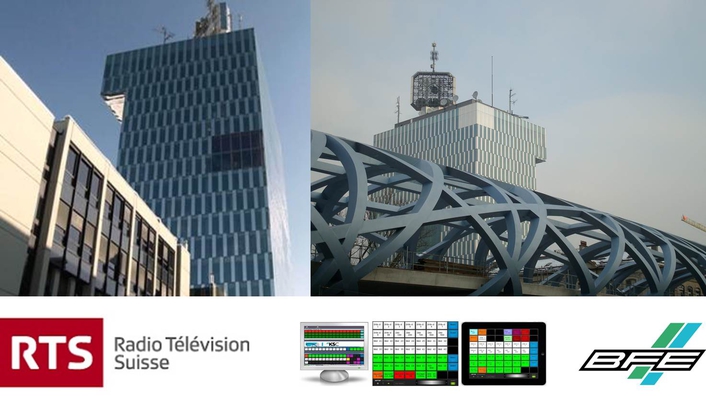 .
BFE has been mandated to realize the system integration of two HD studios at RTS, the radio and television of the French-speaking Switzerland Radio Télévision Suisse in Geneva. The project involves the construction of two control rooms including the connection to one or more studio areas.

For an interim period, one of the two control rooms will be used as multifunctional control room and therefore has to be able to operate various studios via a delegation.

Main components are Sony mixers, Snell routers and Glue equipment as well as a KSC controller system and BFE furniture. The provided Stagetec audio mixers have to be integrated into the new BFE construction.

The biggest challenge lies in the number of components provided that must be integrated in the new control rooms without interrupting the running production.

About RTS
Radio Télévision Suisse is a public broadcaster and is part of the SSR SRG Group. RTS produces and distributes four radio channels, two TV channels and several interactive platforms from its offices in Geneva and Lausanne. The programmes broadcast by RTS can be received by approx 1.8 million listeners and viewers in French-speaking Switzerland. A series of its TV productions Monde are broadcast worldwide on TV5.