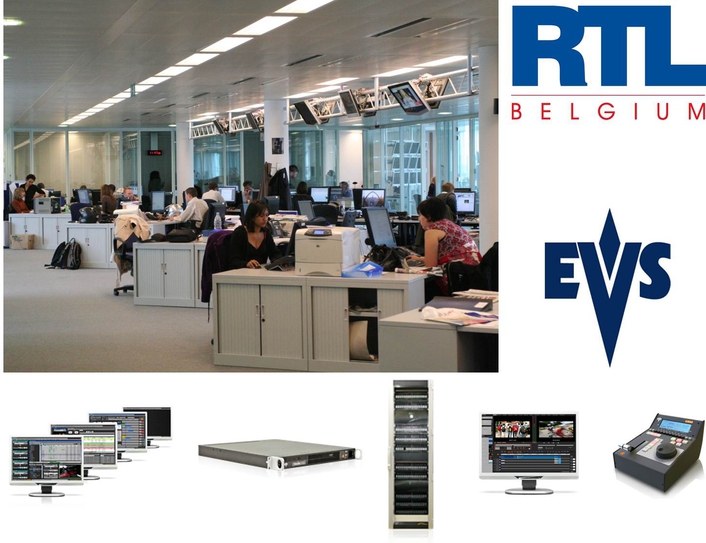 Xedio I/O systems allow RTL’s news production team to ingest live feeds from various press agencies
RTL Belgium, the leading entertainment network for the French-speaking community in Belgium and part of the RTL Group, has renewed its commitment to EVS with the implementation of a fully integrated tapeless HD infrastructure for its news and TV entertainment operations.

As of 12 July RTL is running a new fully integrated HD production infrastructure that is supported by Xedio, the modular application suite from EVS. The benefits of the new infrastructure include sharper images and further enhanced production workflows between RTL’s news and in-house programmes.

Thierry Piette, Technical & IT Director at RTL Belgium, comments: “RTL’s migration to HD began on 30 August 2010, when its programmes were broadcast for the first time in HD. To complete the migration and offer our viewers the full benefits of HDTV, we implemented a new production infrastructure based on EVS’ Xedio system that would enable us to produce content in HD for all 3 channels”.

Xedio I/O systems allow RTL’s news production team to ingest live feeds from various press agencies in MPEG-2 Long GOP. ENG material captured on the field with new Sony SxS camcorders based on XDCAM HD422 codec and media files from local bureaux are imported to a central online storage in Brussels using Xedio Importer. All files are simultaneously generated in high and low resolution, either by the Sony cameras or by the Xedio system, and are instantly available for journalists in Brussels and the local bureaux to begin editing.

For up-to-the-minute news reporting field journalists at RTL use the new edit-in-place feature of EVS’ timeline editor, Xedio CleanEdit. Based on its full virtual editing architecture journalists can start timeline editing operations immediately after shooting, and without the hassle of importing high resolution media. A simple linkup between a Xedio CleanEdit laptop and a Sony solid-state camcorder, allows field journalists to instantly review, select and cut recorded content on a timeline without media duplication. Once completed, a consolidated file can be wire transferred or physically imported to the central storage. And due to the Xedio CleanEdit embedded transcoding, media conforming operations are managed on the fly during transfer.

At the heart of the setup is the Xedio central storage XStoreSAN system, which stores up to 50 TB of high resolution media content and 36 TB in low resolution. The storage system integrates with an internally-developed search module based on a custom thesaurus and advanced text indexing, which allows journalists to browse and select content quickly and efficiently. The references of the selected material can then be pushed without any delay to a Xedio CleanEdit workstation for timeline news editing. The edits are done in low resolution, which remain perpetually online, and do not require time-consuming file restores. Journalists at RTL use Xedio CleanEdit to improve rough-cut edits by adding text and graphics; prepare news bulletins and reports; and produce voice-over recordings. Finished edits from Xedio CleanEdit can be used for playout without any rendering delay or pushed to Avid or Apple Final Cut Pro craft editors for more advanced editing.Playout operations are managed with Xedio I/O players, and due to the Xedio system’s unique architecture file rendering prior to playout is not required (as they are playing EDLs and not rendered files). News content can also be played out directly from the XStoreSAN storage via Xedio CleanEdit.

In order to remain productive throughout the entire production chain and improve the quality of all programmes broadcast on its 3 separate channels, RTL needed to upgrade its studio and live production systems as well. As a result all in-house programmes, including newsmagazines, live sports shows and the weather are recorded in High Definition using EVS XT2+ live production servers.

The EVS servers ingest all camera feeds, which can be immediately browsed and transferred to central storage or post-production via IPDirector, EVS’ content production management suite. During live shows,  LSM remote controls are used to create clips and highlight packages.

Ultimately all media content, whether it is produced for RTL’s news or other programmes, is immediately available to all operators at any stage of the production. Thierry Piette adds: “The interconnectedness between RTL’s news and studio operations has been our goal from the start, and is the result of a long-term collaboration with EVS that began in 2004 and produced a fully integrated system that maximises media interchange”.

EVS will be presenting its range of news and broadcast production solutions at the upcoming IBC show (Hall 8 stand 8B90).