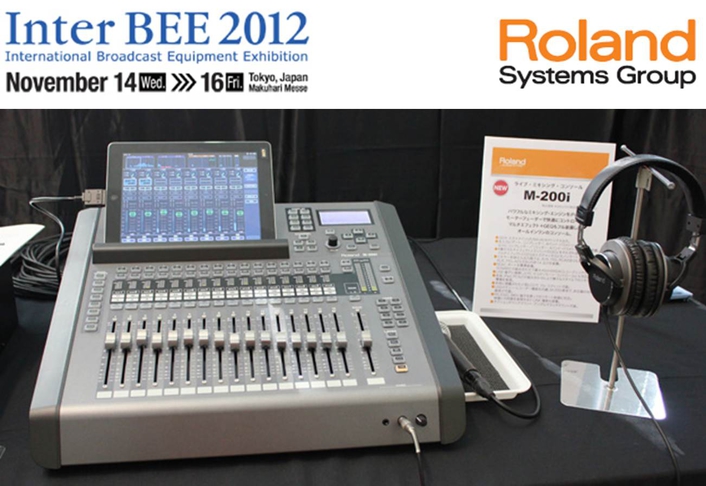 .
Roland Systems Group is pleased to announce the launch of the M-200i - a compact 32 channel professional digital mixing console offering the flexibility and mobility of comprehensive iPad control. The Roland M-200i V-Mixer is a powerful addition to the V-Mixing System line-up that includes solutions for live sound with consoles, digital snakes, integrated playback/record and personal mixing.

The fully functional iPad application enables remote control of all the key features of the M-200i including pre-amp control, pan, high pass filters and PEQ and GEQ control.  It also includes the ability to store and recall scenes, adjust compressors and gates, sends on faders and effect editing. The benefit of the remote control application is the ability to control the mix from any location in the venue (within the wireless network), allowing the user to adjust the levels from different points.  The wireless network is created by plugging a router into the LAN port on the M-200i or by plugging the Roland Wireless Connect adapter (WNA1100-RL) into a USB port.  Alternatively, using the multi-pin cable included with the console to connect the iPad to the M-200i, a wired connection can be created and the iPad can be charged at the same time. 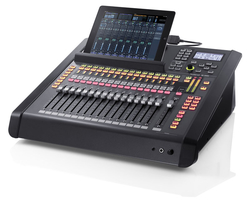 The M-200i features a 32-channel architecture with 17 motorized faders, 8 AUX, 4 Matrix, 8 DCA’s and 24 inputs and 14 outputs on the console itself (expandable up to 64x54 via the REAC port and the Roland Digital Snake technology).  The M-200i can also mix in audio sources from a USB key inserted in the USB port. The ‘touch and turn’ feature allows the user to touch a particular parameter on the iPad and control it with a physical knob on the console.

When using the M-200i without an iPad, the console is fully controllable via the built in LCD screen and an intuitive layout of buttons on a tactile control surface to navigate all of the mixing parameters.

The M-200i also includes a REAC (Roland Ethernet Audio Communication) port that opens the door to powerful expandability options such as personal mixing, live multi-channel recording or playback using the R-1000 48 track Recorder/Player or recording only via Cakewalk SONAR software.  The REAC port can also expand the number of physical inputs by connecting to one of the popular Digital Snakes via a single, inexpensive Cat5e/6 cable. For performing musicians wanting the best possible sound quality and flexibility in their monitor mix plus the added benefit of reduced stage noise, the Roland M-200i also supports the very powerful M-48 Personal Mixing System.

The Roland M-200i is making its debut at the InterBEE show in Tokyo on November 14th and is expected to be available in January 2013.

The V-40HD is the latest addition to RSG's powerful Multi-Format Live Video Switcher lineup that includes the popular V-1600HD and V-800HD models. The V-40HD Live Video Switcher is ideal for any live event or installation that requires the freedom to connect a variety of sources - whether digital or analog, computer or video format – and is ideal for configurations using HDMI cameras as well as computers.  As a true multi-format video switcher, there is no need to match the input sources to the output resolution as each input has its own broadcast quality scaler -  scaling each source as required to fit the chosen output resolution. Packed with powerful features, the V-40HD is an affordable option for customers wanting to transition into an HD workflow and is suitable for a variety of applications such as video production for live events, corporate, educational, and house of worship. 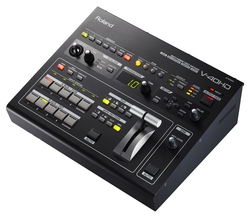 The Roland V-40HD features twelve inputs on four channels plus one (background), and 2 output buses with independent scalers on the inputs. The inputs allow the user to connect HDMI/DVI, RGB, component and composite sources to the switcher. The V-40HD will support input/output resolutions up to 1080/60p or 1920x1200 and is HDCP compliant which allows you to mix copy-protected game and Blu-ray content with other computer and camera sources (digital outputs only). The input source multi-viewer on the V-40HD output provides a convenient monitoring solution when connected to an HDMI monitor. The V-40HD also includes an audio input bus with volume and delay settings allowing you to embed audio into the HDMI output signal, which is especially useful for streaming and recording applications.

The Multi-Zoom feature of the V-40HD can be enabled where one input source is shared internally with up to three more inputs (daisy chaining). The scaler for each input can zoom and pan into any position in the video image giving the appearance that additional cameras are connected and creating a virtual multi-camera environment. Additional effects include a downstream keyer (DSK), Picture-in-Picture and multiple transitions.

The V-40HD is a noise-free unit due to a unique and efficient heat-radiating design, eliminating the need for a cooling fan.  Both MIDI and RS-232 are supported by the V-40HD allowing easy control and integration with additional devices, for example connecting to a V-Mixer for audio-follows-video applications or remote control using a wall panel.