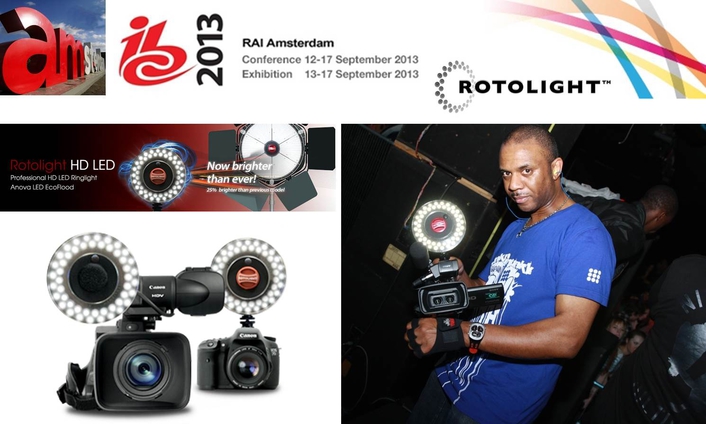 The complete range of new ANOVA products is available in either 'UltraWide' 110 degree beam angle for a beautiful soft light or 'Standard' 50 Degree beam angle for greater straight line output. All ANOVA models in the range are Totally Flicker Free and thanks to the latest LED technology, deliver 'best in class' Colour Rendering with enhanced output (R15 ‘skin tone’ CRI = 98). The ANOVA family is also the most Eco-Friendly system on the market delivering 1000 Watt tungsten equivalent output for just 38-Watt consumption.  All ANOVA lights can be controlled by DMX or via WiFi from the Rotolight 'Magic Eye HD' App for iPhone or iPad, the worlds most advanced Lighting controller APP. 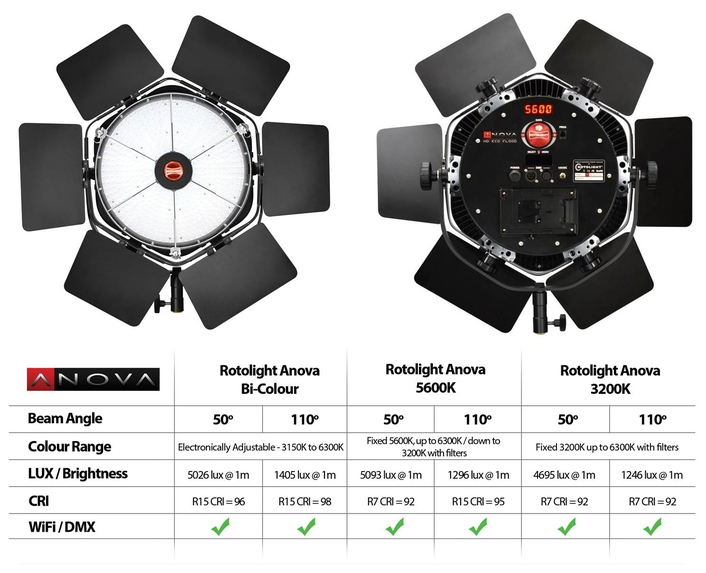 Rotolight have developed a new LED system for the V2 ANOVA’s that gives 'best in class' colour rendition and enhanced output and are ideal for fixed studio installs or ENG. The Bi-Colour ANOVA is electronically colour adjustable from 3150K up to 6300K and can accurately reproduce any colour of white light. All the ANOVA EcoFlood lights produce that signature 'Ringlight' / Soft Light effect and are perfect for Portrait lighting and interviews.

Power consumption is an astonishingly low 38 Watts at full output (1000 Watt tungsten equivalent), so each ANOVA light can be powered by a standard V-Lock or Gold Mount battery for up to 4 hours making them ideal for location or ENG operation.

Rotolight Anova Upgrade Programme
To reward existing customers, Rotoilght are delighted to announce that existing ANOVA owners can take advantage of a generous upgrade or cross-grade offer, where they can update their ANOVA (V1) to any V2 model in the range with choice of beam angle, for just £99/€120/$150 plus P&P (*). To take advantage of the latest LED technology this offer will be available until December 31st 2013 (*terms and conditions apply)

Magic Eye APP wins Cinegear Technical Award
Rotolight, have been awarded the prestigious ‘Cinegear 2013 Technical Award’ for the latest upgrade of the Rotolight Magic Eye iPhone/iPad app. The Cinegear Expo Technical Awards are presented to the best debuting products unveiled in 2013 selected by a panel of highly experienced industry experts who specialize in the latest Broadcast, Cinematography and motion picture technology, including; members of the American Society of Cinematographers (ASC), Peter Anderson – Cinematographer and Visual Effects artist for cult features such as Tron, Close encounters of the third Kind, Battlestar Galactica, and Godzilla. It was also judged by Chief lighting gaffer Dwight Campbell who has worked on Alien 3, The Fighter, and About Schmidt. 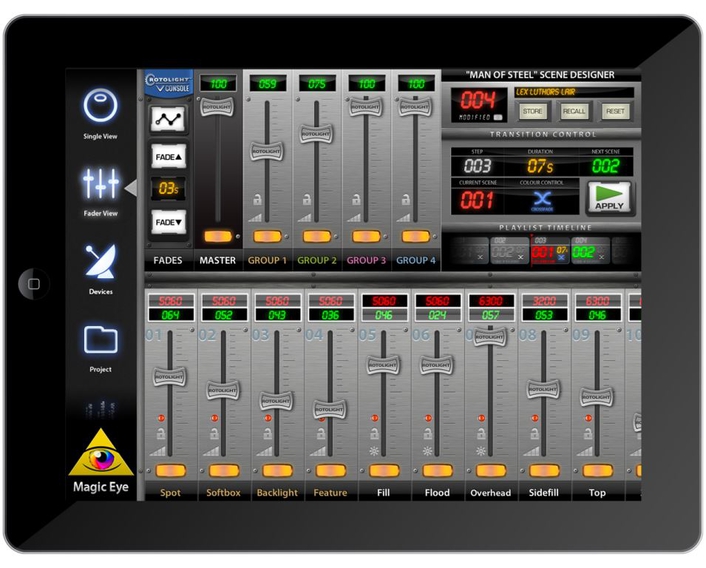 The Magic Eye App by Rotolight is a creative lighting control Application for the ANOVA LED Flood light that provides a simple ‘DMX Console’ user interface and advanced feature set enabling wireless remote control of brightness, colour temperature and systems settings via iPhone or iPad devices. The ‘Magic Eye HD’ lighting controller APP has also recently been updated to version 2.1 for the iPad and will control up to 256 ANOVA’s wirelessly, giving filmmakers a powerful yet incredibly compact mobile lighting control system for location shoots. 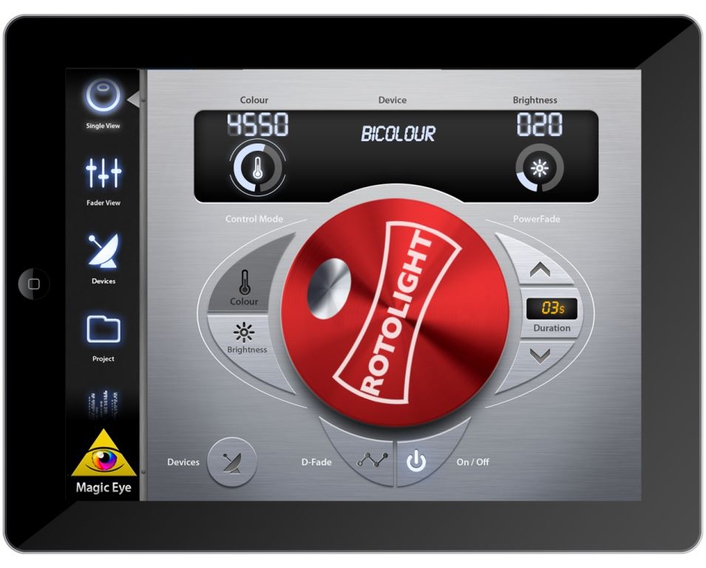 Rotolight ANOVA 6kW ‘RotoFlood’ Light Ring:
The ANOVA’s can be joined together to form large panels of light or large light-rings and Rotolight are showing for the first time in Europe the 6kW RotoFlood Ring, which comprises 6 ANOVA EcoFlood Llights, in a ring with a central aperture for a camera system to shoot through. This is the world’s most powerful LED softlight ring, and 19mm Railmount brackets are available to allow the 6kW rig to be mounted together with any Motion Picture Camera on a 360degree pan and tilt tripod system or camera mount. The Rotolight 6kW RingFlood system is the world’s most powerful LED ‘round the lens’ Soft Light, and the totally flicker free output makes it ideal for super Slow-Mo Cinematography.

A world leader in LED Lighting technology, Rotolight Ltd, is a family run company based at Pinewood Film Studios, England. The Rotolight Magic Eye App and Anova LED Floodlight won the highly prestigious 2013 British Kinematograph, Sound & Television Society (BKSTS) Special Award for Scientific Achievement and Technical Innovation, that has contributed to the advancement of the industries served by the Society, as well as the Cinec Special Award 2012 for Technical Achievement and Innovation.