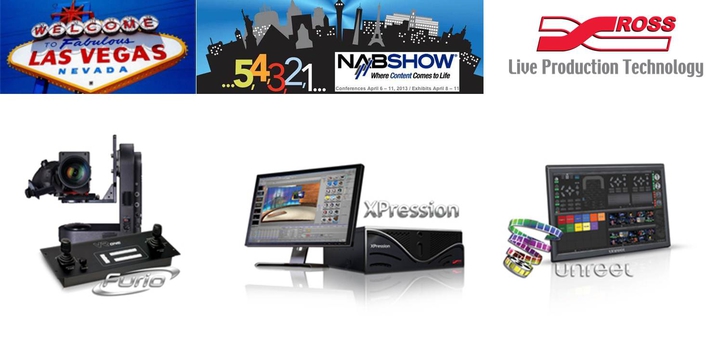 Virtual Set and Augmented Reality
Ross will be showing a live demonstration of a fully integrated virtual studio production and augmented reality system.  VS & AR partner Unreel provides tracking integration and control via Unreel UX - tying together Ross' graphics, switchers, robotics and automation technology.  This display is sure to trigger ideas for broadcasters to practically and cost-effectively take advantage of these new technologies in their productions to make better television.

“We made the deliberate decision not to add 3G to the existing Vision video processing engines.  We wanted to avoid having our customers modify their production workflows to accommodate the reduction in switcher resources,” stated Nigel Spratling, Switcher Marketing Product Manager-Communications, Ross Video. “We made a big engineering commitment to develop video processor designs that would ensure that all switcher resources available in 1.5G would be available when operated in 3G mode.”

The Vision Octane 3G has the same physical chassis options as the standard Octane, but is equipped with new video processing boards that not only accommodate 1080P/50 or 60, but also adds dual 2D DVE resizers and combiners to every MLE key as well as two more DVE channels for transitions. This makes it possible to create 8 box shots on every MLE in the system and transition them dynamically. In addition, Vision Octane 3G has significantly expanded MLE Media Stores, allowing each MLE to hold 8GB of storage for still and animated graphic playout.

“1080P/3G production has been a challenge for many producers. Operating in 3G previously required compromises that many did not feel they could make,” continued Spratling. “With Vision Octane 3G those compromises have been eliminated and new features added. Anyone wanting to embrace full 1080P production will truly appreciate the huge additional horsepower we have engineered into this design.”

Vision Octane 3G will be shipping in the summer of 2013. 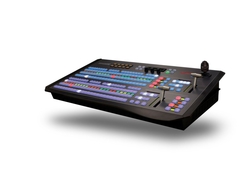 Carbonite Mid-Size Production Switchers
Celebrating over 1,000 units shipped, the rapidly expanding Carbonite family will be shown at NAB including our latest control panels the C2 (compact) and C2X (extended) as well as the new MultiMedia and Plus video processing engines.

Inception Social Media Management
Inception Social Media Management allows clients to take control of social media, providing a single tool to create, publish and incorporate content from Twitter, Facebook or the web into productions. V5 rounds out the product with the addition of a one-time search engine and polling support.  The search engine allows users to quickly identify relevant social content, and polling provides graph-based outputs of Twitter polls that can be brought to air using XPression graphics systems.

XPression DataLinq adds search by record and lookup key creation to dynamically populate templates with data without having to manually create hundreds of pages.

Furio and CamBot Robotic Camera Systems
Ross comes into NAB 2013 with a full year of Ross Robotics. Two acquisitions just over a year ago vaulted Ross into a leading position in robotic camera systems.  Both the Furio track-based system and the CamBot roaming robotic pedestal system will have live demos showing all the latest enhancements.

NK Series Routing Systems
The affordable NK Series video, audio and machine control routing solutions will be shown at NAB.  The 64x64 chassis and 72x72 chassis are now 3G, making the entire video matrix line up from 16x4 to 144x144 all 3G compliant.

Master Control
The MC1 - simple, robust and affordable Master Control System, has taken the industry by storm in its first year. Extended EAS interfaces, increased multi-channel operation with enhanced graphics capability, are just a few of the new extras for the MC1 this year.

openGear
openGear, the open frame standard backed by multiple vendors and deployed by many customers, continues to lead the market with Ross showcasing a range of new solutions including the new DashBoard Version 6 free openGear configuration and control software.

DashBoard v6 enhances the already powerful control over openGear, NK Routers, and MC1 Master Control with new features like Virtual Panels and PanelBuilder. DB6 beta is available on the Ross Video website prior to the official release for experimentation and feedback.