Ross Video and Barnfind Collaborate on openTruck Blueprint for IBC 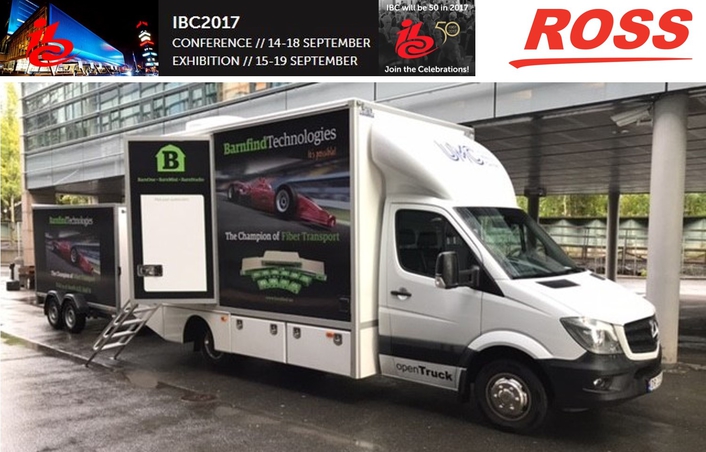 Launched in 2015, Ross Video’s openTruck platform improves production values within the small-to-midsize OB truck sector by offering a free-to-access blueprint for truck builders and commissioners. Based around Ross Video’s Carbonite production switcher and a range of products from the company’s openTruck partner manufacturers, openTruck provides consistency and peace-of-mind for customers looking to broadcast sports or live events in situ.

At this year’s IBC show in Amsterdam, Ross Video openTruck partner Barnfind (Stand 8.A33) will be demonstrating a new openTruck vehicle built for Norwegian customer UMC. This truck will be filled with Ross equipment, including from its Abekas acquisition, to illustrate the power of Ross’ Smart Production philosophy. In addition, both the Ross and Barnfind stands will be linked via fibre (and a BarnOne-stagebox), enabling robotic cameras on the Ross booth to be controlled from the openTruck and demonstrating remote CAM-CCU. Barnfind is the only company that can offer 18 x CAM-CCU without any latency or jitter issues. This set up will also highlight the performance of the Ross DashBoard control platform and how easily any Barnfind transport frame can be controlled by it.

Commenting on the collaboration, Wiggo Evensen, CEO of Barnfind notes, “This setup at IBC will provide an excellent demonstration of how customers can have total control of a workflow from the OB van to commentator hubs and/or the studio. Ross’ openTruck is an incredibly powerful platform and helps make any kind of remote production possible. Unique short-haul networks become very affordable and manageable, and DashBoard is definitely one of Barnfind’s most popular control systems for sports and studio applications”.

Oscar Juste, Ross Video’s Director of Sales for EMEA, particularly values openTruck’s focus on simplicity. “Ross Video won an Emmy® last year for its openGear platform and openTruck also has the desire to make customers’ lives easier at its core. The small-to-midsize OB truck market has traditionally offered up a very mixed bag of products and openTruck addresses this problem very effectively. We’re happy to be working with Barnfind at IBC and look forward to an extremely successful event”.

Barnfind Technologies AS, headquartered in Sandefjord, Norway, manufactures a multi-function signal transportation platform that supports numerous signals in one frame, including common video and telco formats such as KVM, SDTI, SMPTE 2022-6, MADI, SDI to IP, 4K 60p workflows, HDMI, DVI, CAM-CCU etc. In addition, there is a full 32 x 32 router in the frame with re-clocking on all outputs (BNCs and SFPs), reference input, full redundancy and the capability to have integrated CWDM/DWDM multiplexing. Barnfind’s  “no-cost” control software, BarnStudio, can be downloaded from the website. The platform is also compatible with many 3rd party control systems such as Skyline/Dataminer, ScheduALL, LAWO (LSB/VSM), BFE/KSC, DNF, TSL, RASCULAR, BlackMagic, Ross openGear/DashBoard etc. Barnfind offers the world’s most sophisticated CAM-CCU solution capable of supporting 18 x CAM-CCUs on one single fiber with low jitter and latency. Barnfind is known as the Champion’s company; found in most sport Championships around the world.